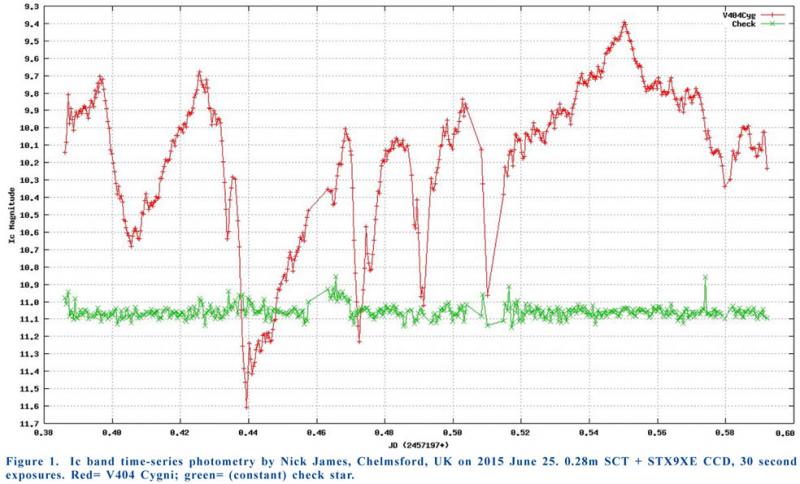 On 1989 May 22, the Japanese X-ray satellite Ginga detected an X-ray nova outburst which was designated GS 2023+338. It soon became clear that the position of this outburst coincided with an optical nova discovered in 1938 by A. A. Wachmann and designated V404 Cygni. The first confirmation photographs were obtained by Martin Mobberley from Chelmsford, Essex who recorded the ‘new’ object at 12.8pg on 1989 May 26.99.1 Visual observations were also made by G. Poyner from Birmingham around this time. The outburst peaked around mag 11.9 on May 28 before fading back to quiescence.
The event was not well covered by the amateur community at the time. However in the aftermath of the outburst astronomers made the first critical discoveries that indicated that the V404 Cyg system may contain a black hole. Once the brightness levels from the nova eruption had diminished enough for the G-type secondary star of ~0.5 solar mass to be observed within the binary system, it was determined that the observed relative motion of the companion star could only occur if the primary object was a black hole.
Plate searches revealed a further outburst in 1956, in addition to the original 1938 discovery. Following the 1989 outburst the distance to V404 Cyg was measured as 8,000 light years, placing the system within our own Milky Way galaxy. It was also re-classified as a Low Mass X-ray Binary and X-ray Nova (LMXB-XN).
The reason why such an object erupts every 30 years or so is not fully understood, simply because there aren’t that many to study. Current thinking is that accreted material from the secondary forms in a disc around the black hole and builds up over time. Once a critical level has been reached, the black hole changes the way it accretes material from the disc, and for a short period brightens in multi-wavelengths.
Since 1989 amateurs have monitored V404 Cyg regularly for further activity, and since the introduction of CCDs it has been possible to record the object with comparative ease at quiescence, with a magnitude varying slightly between 17.0C-18.0C.
Imagine the excitement amongst both the professional and amateur astronomical communities when on 2015 June 15 at 18h 31m 38s the Burst Alert Telescope on NASA’s Swift satellite detected a sudden burst of gamma rays from the position of V404 Cyg, which triggered its own X-ray telescope to begin observing in that wavelength.  Soon after on June 16 MAXI, the Japanese experiment module on board the International Space Station detected a massive X-ray flare from the same source. During these extraordinary eruptions, V404 Cyg became the brightest X-ray source in the whole sky, some 50 times brighter than the Crab Nebula. News of the event resulted in immediate observing campaigns to monitor in all wavelengths with ground-based instruments and satellites. Professionals and amateurs alike got very excited –V404 Cygni had woken up! (Continued…)