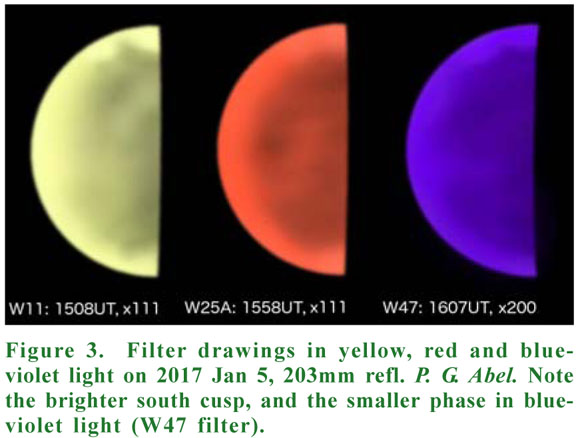 Venus was well placed by the start of 2017, and is being enthusiastically followed. This brief summary goes up to Feb 15. The most systematic ultraviolet and infrared imaging (Figure 1) is being carried out by Phil Miles (Rubyvale, Queensland, Australia). These images show the typical light and dark UV markings in detail, and their variation from one rotation to the next. Phil has also succeeded in imaging the thermal infrared emission from the dark hemisphere (Figure 2). From Athens, Manos Kardasis took a large number of near-infrared images as well as making some animated gif files of them which clearly show the planet’s rotation.
In the visual waveband, Venus shows less prominent details, but we have been able to demonstrate that the southern cusp cap has on the whole been more prominent than the northern during 2016 Nov-2017 Feb (Figures 3 & 4). The method of phase estimation has recently been discussed by Paul Abel.1 As usual, dichotomy occurred early, though the UK weather was uncooperative at the critical time. Ron Palgrave (whom we welcome back to the Section after a long interval) timed it to be five days early from his personal measurements (Figure 5).
At the time of writing, no-one has made any positive sighting of the Ashen Light, but such records are normally made at a lower phase than that reached by mid-February. In BAA e-Bulletin no. 954 (2017 Jan 1), the Director urged observers to search for this effect.
An unusual binocular observation was David Gray’s sighting of a green flash associated with Venus (Figure 6). This is very unusual but not unprecedented, and a sighting by Richard & Julian Baum from 2010 March 12 offers a good comparison.
I thank G.-L. Adamoli, M. Araujo, A. Clitheroe, H. Davies, C. Dole, A. W. Heath, G. J. Johnstone, W. J. Leatherbarrow, M. R. Lewis, M. Nicholls, R. Johnson, S. Macsymowicz and J. Sussenbach for also sending useful observational material.