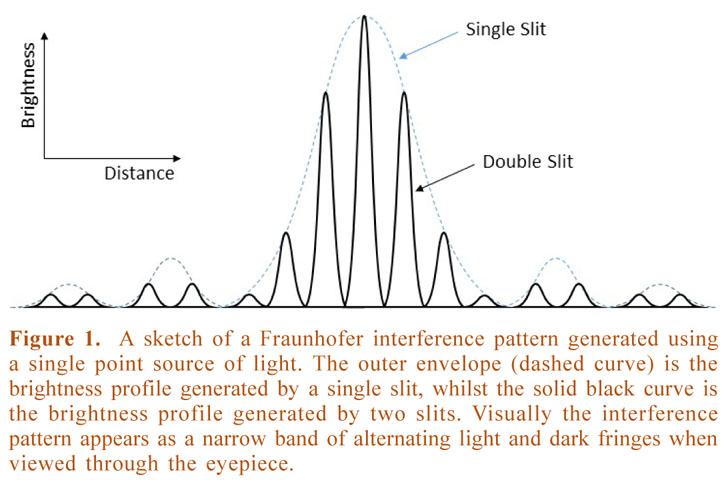 In 1868 A. H. L. Fizeau (1819-1896) was the first to suggest the possibility of using an interferometer to measure the angular sizes of stars. E. Stephan (1837-1893) applied the method visually around 1873 to stars down to 4th magnitude and obtained an upper bound for their angular sizes. From 1890 onwards A. A. Michelson (1852-1931) used the technique to measure the angular diameters of the main moons of Jupiter, the angular separation of double stars and, most famously, the angular diameter of the star Betelgeuse.
The basic general technique applied by these observers is straightforward to replicate using modest sized amateur telescopes. This article presents an overview of visual interferometry of sub-arcsecond double stars using an interference mask placed over the aperture of a 10-inch undriven Dobsonian telescope. The purpose of the article is to demonstrate that interesting and worthwhile results can be obtained from a basic setup using a small telescope, thereby hopefully encouraging others to pursue this interesting field of astronomy.
Light from a single point source will diffract, or bend, when it passes through a slit cut into an otherwise opaque mask. Light rays diffracted from different parts of the slit will interfere constructively and destructively with each other, leading to a series of light and dark interference fringes being visible. Introducing a second slit causes light rays diffracted by one slit to interfere not only with each other, as in the case of a single slit, but also with light rays diffracted by the other slit as well. This modifies the appearance of the interference fringe pattern by superposing relatively narrow light and dark fringes upon the otherwise broader pattern produced by a single slit (in other words the double slit pattern is modulated by the single slit pattern).
Fraunhofer diffraction is the name given to diffraction occurring for a situation in which the width of apertures of the two slits is much greater than the wavelength of light, and the distance between the two slits is small compared to the focal length of the optical arrangement. The optical configuration of a telescope can be made to satisfy these conditions by covering the aperture of the telescope with an opaque mask that has two broad slits cut into it. Figure 1 shows a sketch of the resulting Fraunhofer interference fringe pattern produced by such a configuration. The number of interference fringes seen is determined by the ratio of the separation of the two slits (centres) to the width of the slits…. (continued)
(Login or click above to view the full illustrated article in PDF format)