Watch for the October Draconid meteors! 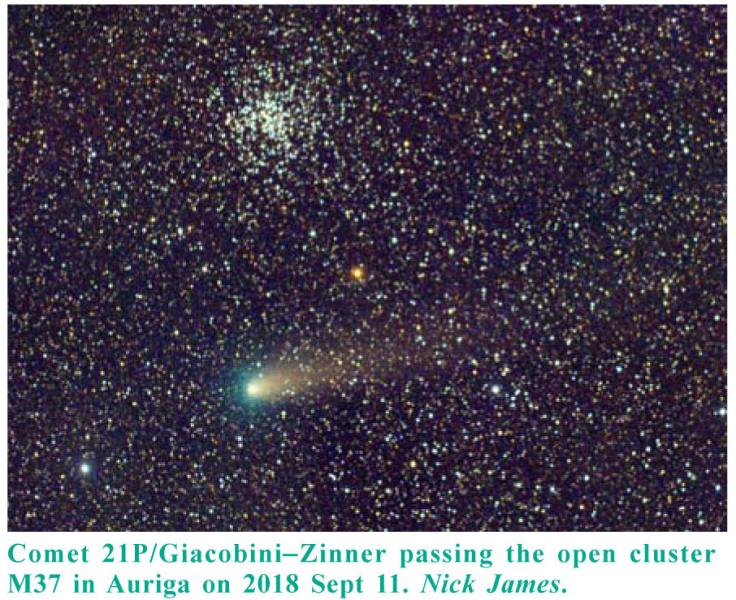 The October Draconid (or Giacobinid) meteor showers were among the most spectacular of the twentieth century. Two outstanding Draconid meteor storms were seen, on 1933 Oct 9 and, thirteen years later, on 1946 Oct 10 when visual rates were greater than one meteor every second, but the total duration of each outburst was only about an hour. Lesser October Draconid showers were also observed in 1926, 1952, 1972 (very weak), 1985, 1998, 2005, 2011 and 2012 (mainly very faint meteors), but none in other years.
All the observed showers occurred when the parent comet, 21P/Giacobini-Zinner, passed close to the orbit of the Earth. Now there is the possibility of another weak Draconid display on the evening of 2018 October 8 – certainly not at the level of the great storms of the past, but still important in helping us to understand more about this most interesting periodic meteor shower.
Each time an active comet returns to perihelion, meteoroids are released into a range of orbits with parameters close to, but not identical to, those of the parent comet. The range in orbital periods of the ejected dust particles soon causes them to stretch out into a long, narrow dust trail, successive trails being created at each perihelion passage of the comet. Consequently, after a comet has returned many times to perihelion, the meteoroid stream will consists of a large number of separate individual dust trails. The strength of the outburst that is observed depends upon which (if any) of these trails the Earth intersects, near to the nodal crossing point. It should also be noted that older dust trails tend to be broader, more diffuse and consequently yielding lower meteor rates than younger, narrower and more concentrated trails.
In 2018 the parent comet 21P/Giacobini-Zinner passed perihelion on September 10, just a month before the Earth will reach the node of the comet’s orbit, where the distance between the two orbits will be only 0.0171au. Nevertheless, modelling of the Draconid dust trails shows that no significant activity is likely, as the trails mostly pass too far from the Earth. Closest approach will be to the 1953 trail at a distance of 0.00249au.
Unfortunately this trail is probably only sparsely populated due to a close encounter with the Earth in 1985. Consequently, there may be only low activity from this trail, with a Zenithal Hourly Rate (ZHR) of 10-20 meteors/hour (m/h), sometime between 23:00 UT and 00:30 UT on October 8/9 (Monday-Tuesday). However, unexpected brief outbursts in activity are always possible, so observations are encouraged throughout the night of October 8/9. The radiant of the shower will be centred on RA 17h 32m, Dec +56°, not far from the star Nu Draconis in the ‘head’ of Draco. Draconid meteors are typically very slow moving, in marked contrast to members of showers such as the Perseids or Leonids.
With new Moon occurring on Oct 9, there will be no interference from moonlight this year. In the British Isles, observers should go out early on the evening of Monday, Oct 8 and observe until after midnight, preferably well into the early morning hours of Tuesday. Observations will also be of considerable value on the evenings immediately before and after the predicted peak to provide a check on background meteor rates at this time. Let us hope for clear skies everywhere on the evenings of 2018 Oct 7, 8 & 9, but particularly on Oct 8/9.
The BAA Meteor Section is seeking the help of all observers to gain an accurate picture of Draconid meteor activity this year. We would welcome any observations of the Draconid meteor shower from individuals or local society groups. Even simple counts of Draconid and sporadic meteors seen within given time periods will be welcome. Please send your observations to meteor@britastro.org.