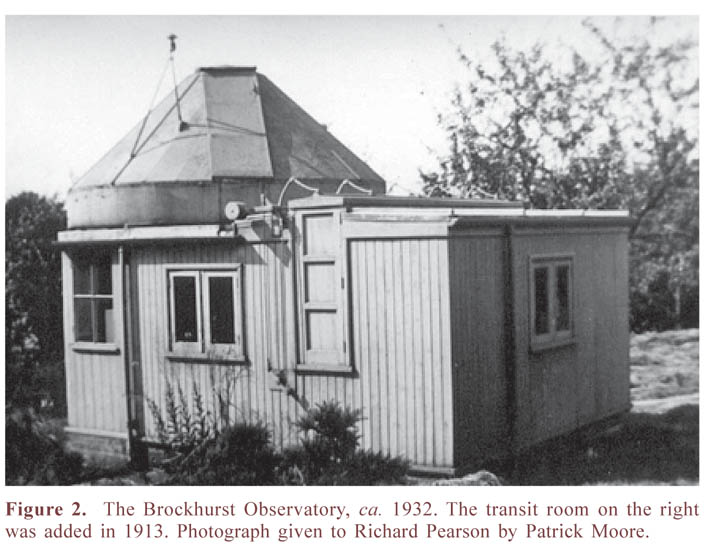 William Sadler Franks (1851-1935) was astronomer-in-charge at F. J. Hanbury’s private observatory at Brockhurst, near East Grinstead, Sussex, from 1909 until his death in 1935. This paper reviews the observational projects Franks undertook at Brockhurst, including his work on double stars, red stars, diffuse nebulae and dark nebulae, as well as his involvement with the commissioning of a 24-inch reflector built by Thomas William Bush (1839-1928).

Introduction
During 2013 Richard Baum kindly presented me with three notebooks of astronomical observations made by William Sadler Franks at the Brockhurst Observatory, near East Grinstead, Sussex, between 1909 and Franks’s death in 1935. They mainly contain notes of his observations of double stars, the moon, planets, nebulae and any passing comets that he made with the observatory’s 61/8-inch (15.5cm) Cooke refractor. Richard had looked after the notebooks since they were given to him in about 1956 by Patrick Moore (1923–2012). Patrick, as a boy in the 1930s, had known Franks and was a regular visitor to the Observatory, which lay across the road from the Moore family home.
The observatory was owned by the wealthy industrialist F. J. Hanbury (1851–1938) and Franks, as the astronomer-in-charge, was expected to entertain Hanbury’s guests by showing them celestial objects through the telescope. For the rest of the time, Franks was free to use the observatory as he wished. (continued…)