Winter observing for all 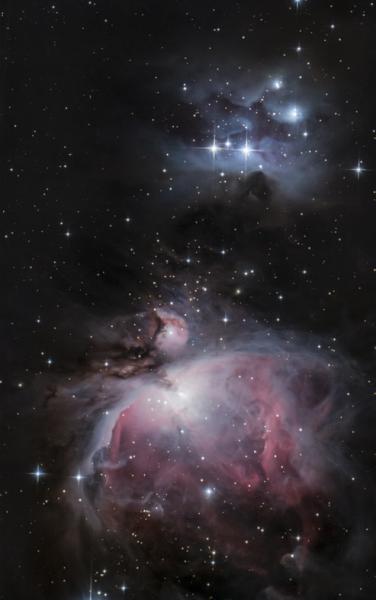 Winter is one of my favourite times to be observing as it’s possible to get a few hours in before having to retire to bed for work the next day. Of course the downside is that it does tend to be a little cold. Locally however I find that cold is a good thing, because if it does not get really cold, the fog rises from the neighbouring rivers (Severn and Avon) and obscures everything!
Although in recent columns I have focused on under-observed constellations, I thought for a change I’d look at one of the most observed, but try to highlight a few objects that might get overlooked.
Of course most people’s favourite constellation of the winter months is Orion. And the standout object is the Orion Nebula, M42. There is probably not much new to say about M42, but it still proves popular for observing and imaging. For those starting out it is an easy object to find, and will give satisfying views with even a small telescope. And for those more honed, it’s interesting to see what detail can be gleaned.
Although filters are not usually needed or a help to see the nebula, I find it interesting to use an Oxygen III (OIII) or Ultra High Contrast (UHC) filter, to see the subtleties of the change of view. For imagers the real challenge is the wide variation in brightness, and how to represent the high dynamic range while maintaining the fine structure and detail. And whenever viewing or imaging a well-known object it’s worth comparing with older images to see if there is anything new or changed.
A good example of a serendipitous discovery was that of Jay McNeil, who when imaging M78 in Orion in 2004, noticed a brightening of a nebulous patch which came to be known as McNeil’s nebula. This is one of a small number of known variable nebulae, and is a subject of the Deep Sky Section’s Variable Nebulae programme. So if you are imaging M78, do also check on the brightness of McNeil’s Nebula.
In days of old when film was king, a popular pursuit for widefield photography was the large scale structure in Orion known as Barnard’s Loop (Sh 2-276). Colour film was quite sensitive to H-alpha emission, so it was not too hard to capture it on film, though it did need good skies and a long exposure.
Unmodified DSLRs are not very sensitive to H-alpha, so this object is really now rather under-observed. Of course a modified camera or a specialised camera like the Canon 60Da should be able to pull out the loop with ease. So I hope members might like to ‘give it a go’ this winter, with whatever camera you have.
For a large constellation there are not many planetary nebulae to hunt down in Orion, with just two within ‘easy’ reach. NGC 2022 is the brightest of the two, at around magnitude 11, and 0.65 arcminutes diameter. Abell 12 is rather fainter at around mag 13, but of similar diameter (0.62 arcmin). However Abell 12 is difficult to see due to the proximity of the star Mu Orionis. A useful technique is to use an OIII filter, which will both improve the contrast of the nebula and cut down the light from the star.
Of course there are many other interesting things to find in Orion – there are a number of nice open clusters, a smattering of galaxies, and some Barnard Dark Nebulae to discover. Spend some time armed with a good star atlas and you will find no end of targets. I look forward to receiving your observations and reports.