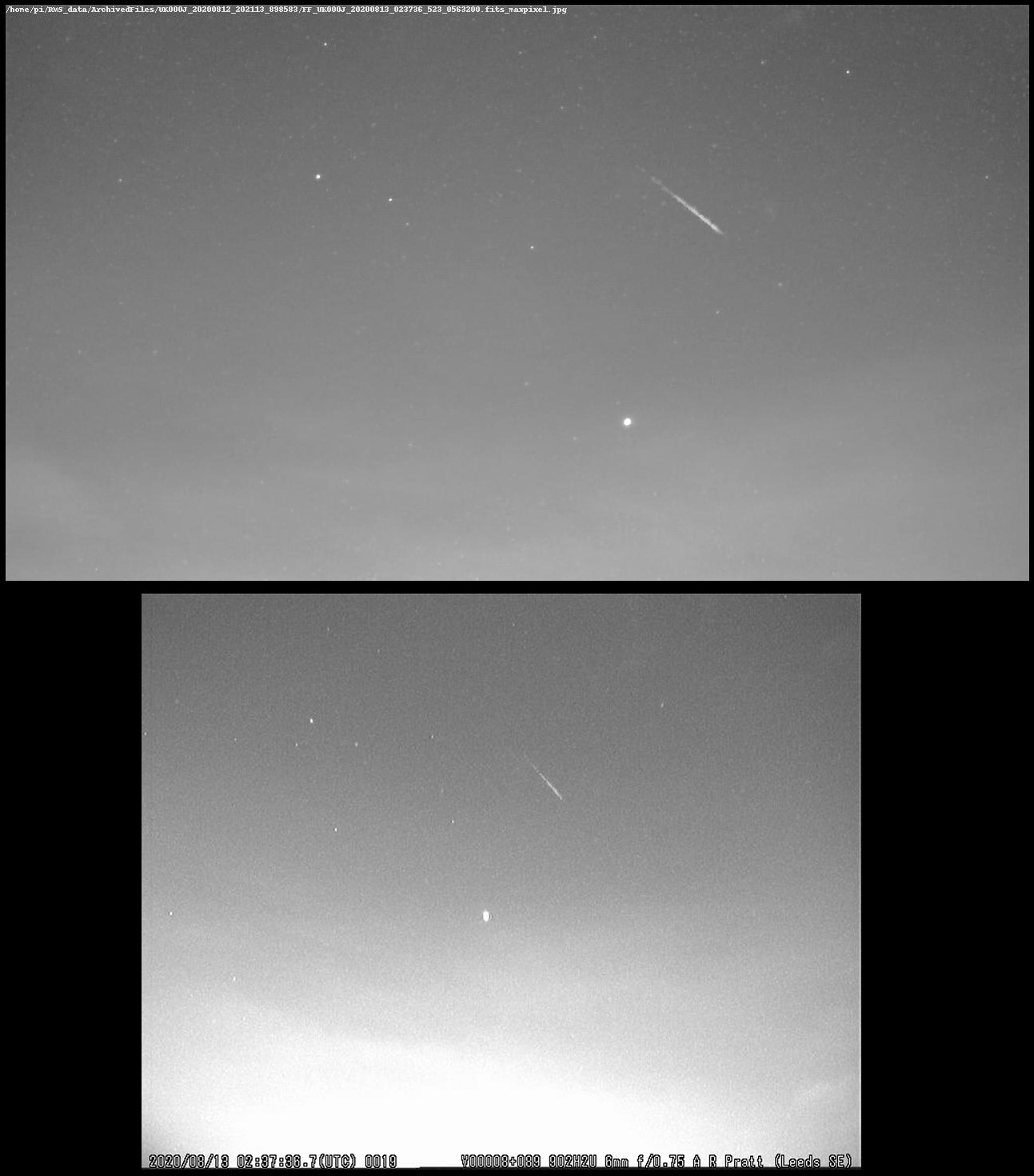 During last month I built a Raspberry Pi video meteor system to compare the Global Meteor Network's RMS solution with that of the UFO Capture suite. It was ready for this month's Perseid meteor shower, although the poor weather reduced the number of meteors I was able to record. This is an example from last night when the sky transparency improved a little.

My RMS station UK000J and UFO station Leeds_SE are aligned on the same altitude and azimuth. In the attached image, the upper pic is from the 1280x720 pixels IMX291 IP board camera with a 6mm f/0.95 lens running RMS software on a Raspberry Pi 3 model B+. The lower pic is from the720x576 pixels Watec 902H2 Ultimate camera with a 6mm f/0.75 lens running UFO Capture on an old Windows 7 desktop. Both systems identified the meteor as a mag. 1 Perseid.

It was fun building the RMS system and it only cost around £160, compared with the ~£450 cost of purchasing a plug-and-play unit from GMN's partners, CMN (Croatian Meteor Network).

UFO Capture performs motion detection on the fly, whereas RMS records 10s blocks of frames then analyses them and it rejects any with fewer than 20 field stars. So, under non-optimal skies RMS can report fewer meteors than UFO. Both systems produce UFO Orbit-compatible CSV files but a time correction of -2.4s has to be applied to the RMS CSV file entries.

I was planning to replace my Leeds_SE UFO station with my RMS one but I would lose valuable meteor data. I like my Pi station and I will run both for the foreseeable future.

Im thinking of getting the Plug and Play version.  Does the RPi get time from internet Alex?   Is this controlled and logged?

I've been busy investigating the cause of the 2.4s timing discrepancy in the RMS CSV output file (used in UFO Orbit). Denis Vida (GMN) explained it's caused by a 60 frame buffer in RMS (60 x 0.04s = 2.4s). So, the RMS CSV file entries have to be adjusted by -2.4s to align them with UFO Analyser's CSV output. Not all GMN RMS users were aware of this issue).

I've also spent some time bypassing RMS' standard parameters to salvage unanalysed meteor clips from Aug 12/13. Now have 23 meteors instead of 10. Only worth all this faff during a major shower such as the Perseids.

Good question about the source of Pi time. Raspbian is based on Debian, a flavour of Linux. NTP is disabled but it looks like on boot up the Pi gets its date and time from Debian time servers using its timedatectl service. The NTP daemon can be enabled and configured, but Debian prefers timedatectl whose config file maps to pools of Debian NTP servers. This was commented out, so I enabled the Debian NTP service and it's running well. I can't see any Debian NTP stats output logs, so I'll probably install Meinberg NTP, which provides detailed timing stats. (I run it on my Win 10 laptop.) I added a real time clock module to my PI to remember the date and time when it's powered off.

If you're going to pay a lot of money for a ready-built system I would expect it will have NTP enabled.