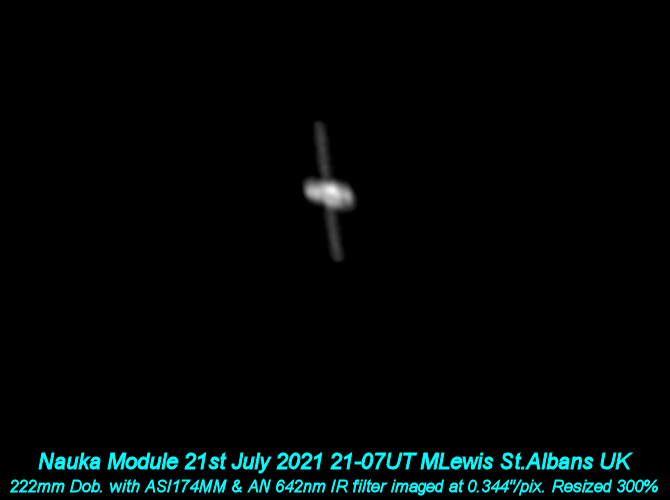 Recently launched Russian Nauka module on its way to dock with the ISS as it passed over St.Albans this evening. Thanks to Szabi Nagy of @spaceStationGuy for alerting me to this pass.

Great image Martin. I saw this with the naked eye following a couple of minutes behind the ISS in its first pass last night at 10pm BST. It was quite bright but variable which I thought was a bit odd. Should be getting closer over the next few days aiming for docking no earlier than the 29th.

Thanks Nick, More opportunities to image it in coming days then.

Was expecting the module to be about 6mins behind the ISS for the 10pm pass whereas it was more like 2 mins behind so it was overhead when I turned my attention away from ISS. Panicked a bit but just managed to get a fraction of a second with Nauka image on the chip before it disappeared behind a tree to my NE. Fortunately 19 frames of the 40 or so captured were good and this is the result of the quick processing of those. Will spend a bit more time processing those again later and image may improve a bit.

When it went over last night it was pretty much at perigee (190km) which is why it was moving so fast.

I caught all three objects (ISS, Proton upper stage and Nauka) on my SE meteor camera during that pass:

I tried again on the following pass but Nauka was so low it was in shadow by then.

That video is instructive, Nick. I only heard about the upper stage after the event and was too busy tracking the ISS to take it all in. Should have left the ISS and just focussed on the 'extras'

Have just updated the image after improving the stacking and processing.

Great image!    By chance I looked up that night to see the ISS pass almost overhead and then the surprise of two bright objects at intervals behind it.  I had no idea about them and thought I'd confused the ISS with another string of Musk's satellites!