This paper reviews the principal details of typical magnetic storms together with relationships between magnetic and auroral activities. It then discusses a simple method of attempting to observe magnetic-field disturbance as a means of warning the observer that the aurora may be active.

The Earth’s magnetic field may be defined at any observatory by its horizontal-force component, H, the vertical-force component, Z, and its angle of direction, D, relative to that of true north. The strength and direction of the field may be altered temporarily by the generation of electrical currents in the upper atmosphere and in outer space surrounding the Earth due to solar activity. These currents produce their own magnetic fields which react with that of the Earth to form a net resulting field. Such disturbances cause changes in the values of H, Z and D. In broad terms they may be classified as follows:

Larger in summer, these daily changes are due to the tidal movement of ionized particles in the upper atmosphere backwards and forwards across the magnetic-field lines of force.

So called because of the shape of the disturbance traced on a magnetogram; they are found only on the daylight side of the planet. Crochets are brought about by increased ionization of the upper atmosphere due to the arrival of enhanced ultraviolet radiation from solar flares.

These comprise rapid increases in magnetic-field strength on both day and night sides of the planet; they are caused by compression of the magnetosphere surrounding the Earth by the arrival of a cloud of ionized particles shot out from an active region or flare on the Sun. These may or may not be followed by a main-phase magnetic storm.

These follow a sudden commencement and comprise a rapid diminution in field intensity, followed by a period of slow recovery to normal field conditions. They are due to increased ionization and resulting spatial electrical currents surrounding the Earth.

Sometimes referred to as a bay due to its shape on a magnetogram, the substorm generally is a diminution of field intensity imposed during the recovery period of a main-phase storm. The sub-storm is associated with auroral activity and may repeat itself several times during the recovery period. It is brought about by auroral generating particles arriving from the tail of the magnetosphere. 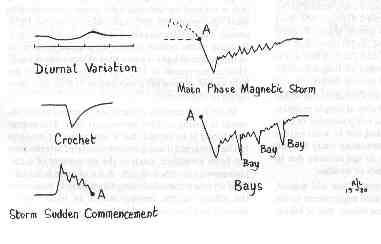 These begin with little or no sudden commencement, are of low intensity, last for several days, and have a tendency to repeat at 27-day intervals associated with the rotation of the Sun. There is auroral activity of low profile which does not reach so far towards the equator as main-phase storm aurorae.

Magnetic disturbances associated with the visible aurora are greatest in effect at the Earth’s surface immediately beneath the discrete auroral forms. The magnitude of the disturbance reduces equatorwards from the active auroral region. Certain auroral storms develop polewards from the auroral zone instead of equatorwards and in these circumstances magnetic disturbances related thereto may not be detectable by observatories at lower latitudes. It is also known for the field to become suddenly quiet and free from disturbance and for such periods to repeat themselves at 27-day intervals or thereby.

Measurements of the magnetic-field components are conducted professionally with precision instruments in observatories where the effects of natural and manmade-local ‘noise’ are minimized to a high degree in view of the small quantities that are to be detected. Notwithstanding the difficulties, the measurement of variations in the quantity D is a feasible proposition for an amateur investigator. Dr Michael Gadsden in Aberdeen and Mr David Pettitt both run recording flux-gate magnetometers that have contributed to the magnetic records of the Aurora Group. Mr Karl Lewis in Cornwall operates a simple manually-read magnetometer which produced useful records of the great storms of October 20/21 and 22/23, when it was possible to correlate the timings of magnetic sub-storms with the appearance of auroral forms.

With the encouragement of Dr Gadsden, the writer set out to investigate the possibility of simple magnetometry as a means of receiving early warning of possible auroral activity and to find out to what extent magnetometry might be an interesting study in itself for members unable properly to see aurorae due to geographic location, street lights or weather.

Will Ramsay, an engine-fitter of the old school, long-since deceased, once defined engineering to the writer as the art, not of making things, but of faking them out of nothing. The writer is also a firm believer in following first principles, especially along the historical path of their development. Put principles of science and a penchant for the chewing-gum-and-string approach together and ‘jam-jar’ magnetometry was born. To be fair, the writer acknowledges the fact that Dr David Gavine started to build his magnetometer before the one about to be described. 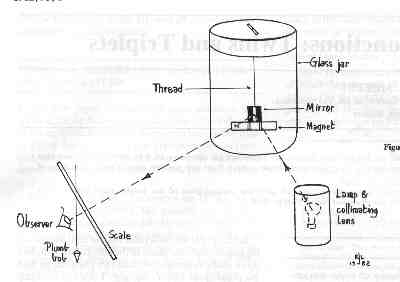 A small but powerful bar magnet 2 cm long was fitted into a copper wire cartier to which was glued a piece of glass mirror. The mirror surface was painted with matt black paint to leave only a thin vertical clear strip about 2 mm wide. The carrier was suspended by fine nylon monofilament thread inside an old glass jar, the thread being carried through a hole in the plastic screwtop, tied to a matchstick and glued to the top. Care was taken to ensure that the mirror was seen through the cylindrical barrel and not the curved bottom.

The whole assembly was rested on a wooden shelf glued to one side of the end wall in the garage. At a distance of 1.5m and at the same level, an electric bulb was installed in an old paint tin. A collimating lens was fitted over a hole in the side of the tin to shine a beam of light on the mirror. At the other end of the garage at a distance of 5 m, a horizontal metre-stick was supported on an old camera tripod. Care had to be taken when gluing the mirror into position on the magnet carrier that the direction of magnetic north was taken into account to enable the pencil of light from the lamp to be reflected correctly from the mirror towards the scale.

To read the instrument, the observer rests his head against the garage door. The head is moved from side to side and the eye centred to receive the pencil of light at its greatest brightness. This process is improved by wearing reading glasses so that the image forms the centre of a star of radial rays, which appear longest when the image is at its brightest. A plumb-bob is centred up with the light-image and is used to mark the point on the scale relative to the light-pencil. The apparatus can be read to 1 cm of accuracy. Because of the optical system the angular movement of the pencil of light is twice that of the magnet itself. Thus a movement of 17.5 cm in the location of the light-pencil represents a movement of 1 degree in the orientation of the magnet.

There is no zeroing of the scale required as the observer is noting relative movement only. The important factor is to record that a new series of readings has been started if some known source of interference has been identified, such as the movement of a car, lawnmower or other object. A lot of time is initially used up when commissioning the station in measuring the effects on the magnetometer of local ‘noise’; indeed, one becomes suddenly very conscious of the

location of every piece of ferrous metal within one’s own premises and to tend to make marks so that they may be returned exactly into position if removed. The behaviour pattern of the neighbour’s wife’s car, especially when she garages it at night, takes on a sudden importance when it turns out to be the biggest single piece of extra-domiciliary noise in the neighbourhood. Notwithstanding the problems of interference, under the right conditions the system actually works.

On a typical quiet day when there were no sunspots visible at the telescope nor discernible neighbourhood activity of a magnetic nature, the following readings were noted:

The following readings were taken on an active day when at Aberdeen there was an all-sky aurora and the local magnetometer ‘went wild’. The Sun exhibited a goodly rash of sunspots.

In the above observations rising scale figures indicate more westerly deflections. The magnet tends to swing westwards from the quiet position during a sudden commencement and eastwards during crochet, main-phase and substorm activities. Naturally enough, more frequent reading of the instrument would have produced more detail of the storm. Suffice it to say that, by becoming familiar with the dynamic magnetic pattern of the area, it is possible to pick out recordings which suggest that a magnetic storm is in progress and that a watch for auroral activity should be put in hand.

It is a feasible proposition for an amateur astronomer to attempt measurements of disturbances in the Earth’s magnetic field due to solar activity, as a study in itself or as a warning that auroral activity might take place. Apparatus need not be complex, but the observer must get to know by experience the pattern of magnetic noise in his or her own locality in order to be able to deduce which disturbances are due to movements in the neighbourhood and which are solar generated. More advanced apparatus of the selfrecording type adds detail to the observations.

The study of magnetic storms, it is proposed, would be, and in fact already is, a useful adjunct to the programme of the Aurora Section.