Your questions answered (well, some of them)

This started for me back in April 2016 when I was just about to take over the BAA Aurora Section. I was sent a photo of an aurora by Alan Clitherow. It was a panorama and showed the normal arc with a few short rays. However, off to the left was a beam of red light that went much higher, and by Alan’s account, was difficult to see with the naked eye. Neither of us new what it was or what was causing it but it was part of the aurora display.

It turned out that this was a new phenomena which was initially called “STEVE” after a cartoon character who calls anything he doesn’t know this name. It came from the Alberta Aurora Hunters, a facebook group in Canada who had also seen it but originally called it a proton arc. Proton aurora cannot be seen from earth, only from satellite, and Professor Donovan of Calgary University, began to look at this with the help of the AAH. By linking their observations and ESA swarm data, he noticed that one of the swarm satellites had passed through STEVE. The data indicated that it was a jet of gas heading westward at a height of 300 km, that the surrounding gas was doing 20mph and that the jet was doing 14,000mph, that it was 3,000c hotter and the whole display lasted no longer than an hour.

STEVE has now also changed colour. It is now a whitish purple and appears to flicker. It always lies to the west of the main aurora display, and usually occurs not long after the main display starts. My first sighting of it occurred on the 18th /19th March 2018 after a coronal hole strike. The aurora was not strong but the standard green arc with a few rays as we have seen many times from the Moray coast. Looking to the west I spotted STEVE rising above Knock hill, a whitish purple column about 15 degrees high. Taking lots of photos, I also noticed an almost like river flow of patches flowing from directly overhead down towards STEVE but ending up about 5 degrees north of the column. It lasted about an hour and at the end seemed to move across to the descending stream. 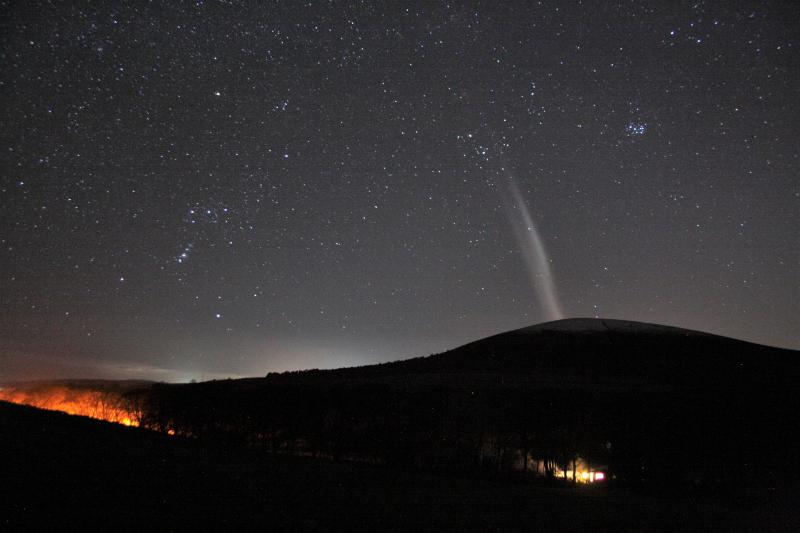 This is all something new and I, and my predecessors have seen nothing like it. There are still a lot of questions around what causes it, why it’s that colour and why has it become visible. Therefore any observations are extremely important in trying to understand this phenomena.

So, what do you look for and where? If you look to the north you will probably miss it, since it appears due west at 57.30N. You might not see the auroral arc, but in the west you may see a beam that looks like a car headlight, or a searchlight. You will have to look out every 15 mins since STEVE only lasts for an hour at most. There is however a good chance that this will be visible well into England even if the auroral arc isn’t, so if you spot something like it, please take lots of photos and send in a report.