I live in Kruibeke, Belgium and I was born in the year A.Einstein died, I have great respect for A.Einstein. In my younger years I was particularly interested in space, since I was 14 years old when the first moon landing took place, i sat glued to the TV. After the traditional family, cottage, garden, children (not in that respective order), there was no time left to me to keep working on it further. After the children grew came back more free time. With the eclipse of 1999, my interest was aroused again and now more specifically in the direction of astronomy, observing itself.

I began quickly with astrophotography, particularly with converting webcams, building an astro-CCD camera, specifically the Genesis camera. Honestly, I was quickly bored with that astrophotography and wanted something more to do what a contribution to science could mean. More about me: visit: http://www.astronomie.be/erik.bryssinck/aboutme.html
The BRIXIIS observatory is a privat astronomical observatory that you can find in Kruibeke, Belgium. About 10 km South of Antwerp near the river ‘De Schelde”. The observatory is running and operated by me (Erik Bryssinck).  What is BRIXIIS meaning ? BRIXIIS is the oldest spelling found of my surname (ca.1293).

BRIXIIS  was builded in 2005 and houses an Orion Optics 0.4-m diameter f/3.8 telescope initial on a 10Micron GM2000 Qci mount and upgraded to a ASA DDM85 standard mount in june 2013.  In june 2012 was the SBIG ST-10XME camera upgraded to a scientific SBIG STL-6303E camera.  The SBIG ST-10XME camera should be still used for narrowband photometry on bright comets and from june 2014 for spectroscopy on a additional C11 telescope. 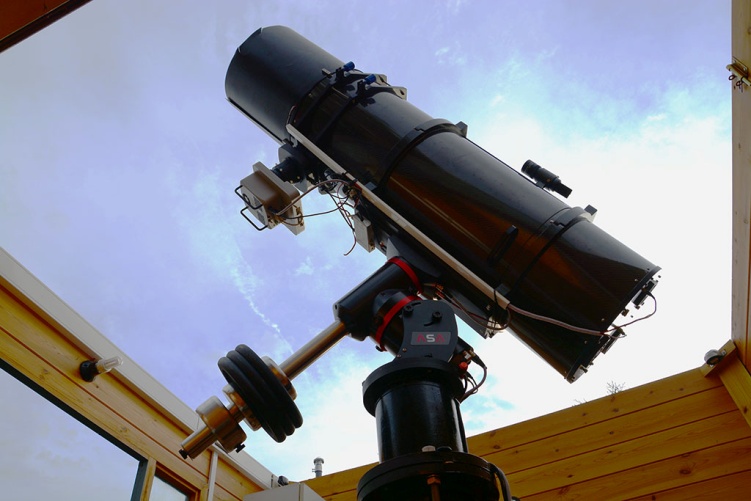 In the same year 2005, a couple of months before starting of building the observatory, I started with observing comets and do Af(rho)-measurements on comets in collaboration for CARA-team of Italy. http://cara.uai.it

The main work for BRIXIIS observatory is (in order of priority):
–    Afρ measurements in broadband and narrowband of comets in collaboration for CARA-project (since 2005)
–    Cometary astrometry (by use of Astrometrica software – since 2009)
–    Cometary photometry for the Spanish Cometas Observadores by use of the FOCAS-II software (since 2009)
–    Spectroscopy starting from sept. 2014
–    Occasionally observing objects mentioned on the NEOCP (Near Earth Object Confirmation Page of the Minor Planet Center – since 2010)
–    Occasionally sky-survey for search of NEO & comets (since 2010)

At the moment (mid 2014) , I observed nearly 190 different comets and have more than thousand of CCD-images of comets. But this is not the main goal to get ‘numbers’.  In collaboration with CARA-project, my observations and resulting Afρ parameter are used in scientific papers, which you can find a few on my website : http://www.astronomie.be/erik.bryssinck/publications.html Link to my website: http://www.astronomie.be/erik.bryssinck/