My interest in observing comets began in 1974 when Patrick Moore appeared on TV informing me that there was going to be a very bright comet visible in the western evening sky around Christmas and New Year. Possibly the “Comet of the Century”. I tried on many nights and though I never did see Comet  C/1973 E1 Kohoutek, it nonetheless set me on a path I still follow. The first comet I did observe was Periodic comet 6/P d’Arrest in 1976. I was determined to see this returning comet after I read a Comet Digest article in Sky and Telescope (July 1976) by John Bortle and Brian Marsden, which outlined the prospects for its upcoming apparition. A 6 inch F/8 Alt-Azimuth reflector was my only instrument at that time. I used a careful star-hopping method with that telescope until I reached the field containing my first comet. What an age away from the computerised GOTO telescopes I use today. That simpler age is long gone and my routine now, during a nights observing run, is to image more than a dozen comets, many so faint that visual observation of them would be impossible. 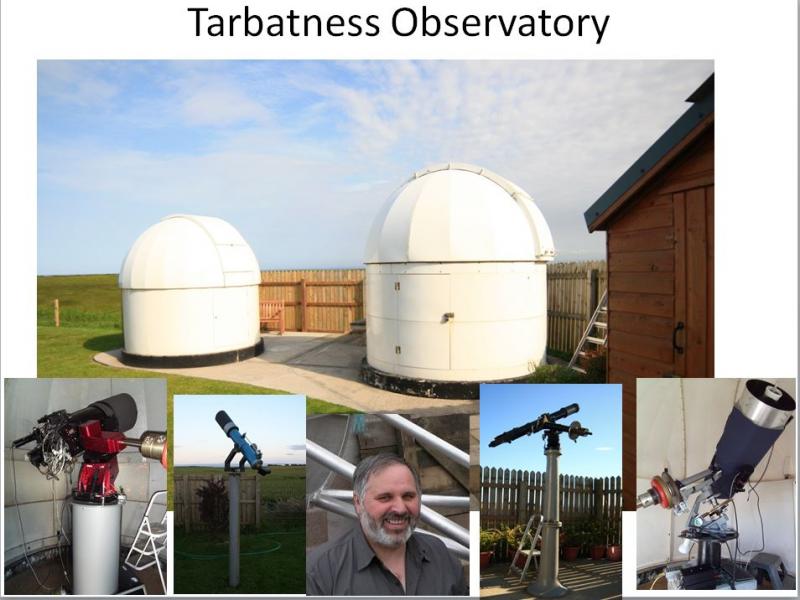 In 2010 I retired and moved to Highland Scotland and established a more modern observatory from which to observe comets. My main interest is still cometary astrometry and now I am freed from the constraints of earning a living I am able to persue this with a renewed vigour and in a more relaxed way. A nights’ observing now means stopping only when the conditions deteriorate or dawn arrives. All the comets above the horizon, bright and faint, are now available to me and my telescopes are set up and equipped for comet imaging without manual interference. The computers, CCD’s and the GOTO systems go about their business, only prompted by me to move to the next target. I am now producing more cometary astrometry in a month than I did over 10 years of photographic astrometry.

I have installed two observatory domes at my home at Portmahomack on the Tarbatness Peninsula. It lies between the Moray and Dornoch Firths, jutting out into the North Sea about 40 miles north of Inverness. Both domes are 2.7 metres in diameter and have more or less unobstructed horizons.  In one of the domes is a C14 and a wide field 80mm Apo on a Paramount ME. The CCD cameras used at present on this instrument are an SBIG ST9XE and a Starlight Xpress SXVH9.The other dome contains a 30cm f/4 Newtonian with a Baader MPCC and a BAA loan CCD, an SBIG ST10XE.  In addition to these comet imaging telescopes I have two visual instruments a 23cm f/4 Newtonian and a Victorian built 100mm Ross Apochromatic refractor (The George Alcock telescope). My observatory is also equipped with two automatic meteor detection cameras operating for the BAA NEMOTODE Network.

My aim is to continue to produce cometary astrometry and also to participate in the programme to obtain visual equivalent cometary photometry from the CCD images I take.