I live in Waterlooville in the county of  Hampshire on the south coast of England. As you might have guessed the name is associated with the battle of Waterloo – 2015 is the 200th anniversary of that event. The story goes that troops returning from the battle disembarked at Portsmouth and made their way north. By the time they had got this far they had drunk all their pay and so decided to settle here. I was born in Buckinghamshire so don’t hold any of that against me !!! 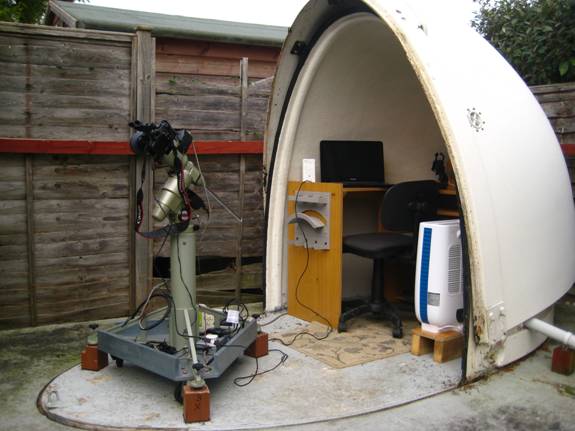 In recent years I have become somewhat of a fair–weather observer – late, cold nights are not for me. Most of my imaging is done with the Sierra Stars Optical Network (SSON) telescope and I am currently experimenting with iTelescope. I do own a 10” Orion Optics (UK) Newtonian reflector which is housed in a pod in my back garden. A wifi link enables me to monitor it from my study once it is set up and running. At present I am experimenting with a DSLR camera on the mount previously used by the reflector and have just purchased a samll refractor for wide-field imaging again with a DSLR

My interest in astronomy did not become serious until I took early retirement in 1996. A member of the BAA and RAS for many years I also belong to the Hampshire Astronomical Group which has an observatory with several telescopes located in Clanfield, Hampshire.

During my time with the BAA I have served on Council and been Asteroid and Remote Planets Section Director. Having written a book ‘Asteroids and Remote Planets and How to Observe Them’ I decided it was time for a change. Currently I am an active member of the Comet Section with a Mentoring and Outreach role. To that end I pulled together several existing pieces of software to allow visual equivalent magnitudes to be calculated from CCD images. This procedure and others to encourage observers to develope their comet imaging skills can be found on my Project Alcock website at http://www.britastro.org/projectalcock/index.htm Recently I have experimented with spectroscopy again using the SSON telescope. Unfortunately no really bright comets have appeared of late but imaging stars has allowed me to gain experience in both observing and image processing.

And now for something completely different. An interest in exoplanets has been developing of late. After reading several books and articles on interstellar travel I came to realize that there was a great deal said about starships but little or nothing about what spacefarers would do when they actually arrive at their destination. So that is another area of research for me and I am using as a basis a book by Lewis Dartnell ‘The Knowledge – How to rebuild our world from scratch’. Terry Pratchett’s and Stephen Baxter’s trilogy, ‘The Long Earth’, ‘The Long War’ and ‘The Long Mars’ also have some relevance.