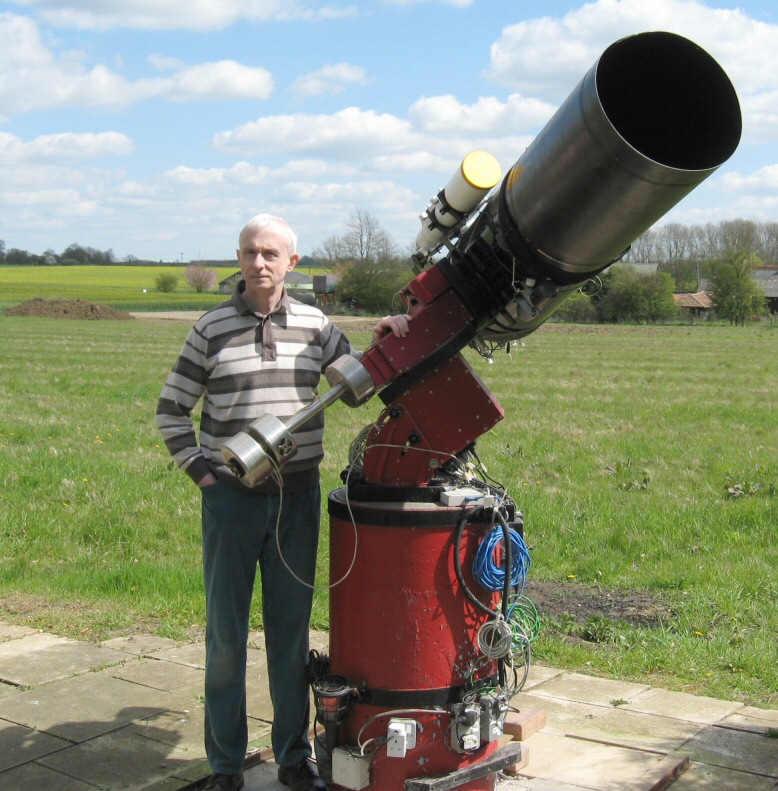 My main instrument here is the 0.35-m C14, used at f/7.7 with the ST9XE CCD, plus various other smaller instruments. The 12” f/5.3 Newt has been the most heavily used telescope since 2010, but purely for taking planetary images, mainly of Jupiter, but some of Mars. In recent years the majority of comet work has been done remotely due to the far superior skies, astrographs and CCDs on offer from itelescope.net, especially for fields of view wider than the 13’ of my C14 system. In addition the ability to take the bone-chilling pre-dawn UK cloud battle out of the equation and image pre-dawn comets at midday is very compatible with my ageing torso! The availability of systems of 17 and 20 inch apertures that can image 3/4 degreefields in a black sky is hard to beat without spending a fortune installing a similar system here, where it is usually cloudy when a really good comet comes along! It also enables imaging of southern hemisphere objects totally invisible from the UK.

Things have changed a lot since I battled with offset-guiding and film hypering, developing, fixing and printing in the 1980s. My best visual comet view was also from foreign skies. Seeing Hyakutake with a 60 degree tail visually from Tenerife in 1996. I do not believe I will ever match that sight. I am mainly interested in imaging comets these days, which I guess overlaps with monitoring them. I am certainly interested in historical cometary accounts, but that particular research field has pretty much been taken over by the Cometography project.  I was once a comet hunter and have even written a book about hunting and imaging comets, but the glorious era where the visual discoverers ruled the skies is long gone. I’m always fascinated to hear of amateur discoveries still being made and the psychology of the individuals involved is of great interest too. However, for me personally, I have no plans to do battle with Pan-STARRS, and enjoyed far more the era when the likes of Alcock, Bradfield, Honda, Machholz and the rest discovered comets the old way, rather than by using automated machines and software, like the pros. I originally started hunting for comets visually from 1980 to 1984, then photographing them from 1982, imaging them from the early 1990s and now imaging them remotely.

It’s just a hobby, that started for me in 1968 and, after various twists and turns, I’m still doing it. My childhood ambition was to own my own time and space machine, but I failed dismally in building one, so I do amateur astronomy instead and writeabout it now and again. Clearly the neural net that developed inside my head decided to wire itself up with some kind of astronomy addiction taking preference, for better or worse, and I’m lumbered with it, but there are worse addictions!

My comet images are online here. Most of my comet photographs from the 1980s and early 90s have not been scanned, but a few are at the bottom of that page.