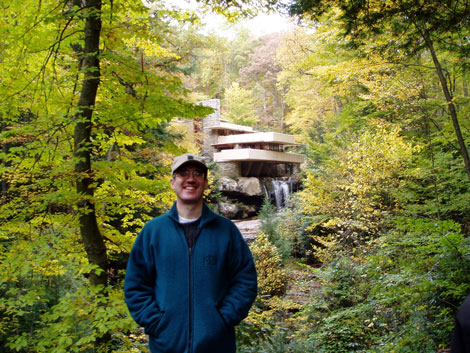 My name is Mike Frost and I’m the director of the BAA Historical Section. My day job is in systems engineering but astronomy has always been a major part of my life. I watched the Moon landing in 1969 and a few weeks later my dad took me to a relative’s observatory, where I was shown Jupiter and Saturn. I was hooked! At university I learned my observing skills on the Northumberland Telescope at the Institute of Astronomy, Cambridge. I went on to do an M.Sc in Astronomy at the University of Sussex and the “Great Astronomers of History” course offered by the University of Central Lancashire.

I am a past-chairman of Coventry and Warwickshire Astronomical Society, a member of the B.A.A. since 1995, a Fellow of the Royal Astronomical Society and a founder member of the Society for the History of Astronomy. When I first joined C&WAS, Halley’s Comet was due to return, and I attended a lecture on Edmund Halley by Dr. Allan Chapman of Oxford University. Dr Chapman brought Halley to life, and made me realise that the history of our subject offered a new way to illuminate our subject, and also a way to do original research without the need for telescope time! 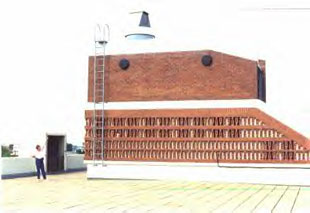 My research interests in the history of astronomy include the history and mythology of sky phenomena, eclipses and transits, especially transits of Venus. I have a long-standing interest in the camera obscura and have visited many around the country and abroad. On the right is the camera obscura in Pretoria, South Africa, which I visited in 1998.

The Society for the History of Astronomy

For the SHA, I have written about the lives of a number of astronomers born or active in Warwickshire, where I live. These include Sir Norman Lockyer, the solar astronomer who discovered helium, who was born in Sheep Street, Rugby. In conjunction with friends in the Rugby local history group, I have fleshed out detail of Lockyer’s childhood and adolescence in Rugby, Leicester and Kenilworth. We found, for example, that Lockyer’s father manufactured matches in Leicester. Perhaps one reason why Lockyer became a pioneer in the use of the spectroscope was because he intuitively understood that, even within the Sun, different elements burned with different colour flames. 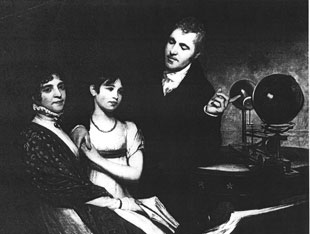 This portrait hangs in Burlington House, Piccadilly, the home of the British Astronomical Association and the Royal Astronomical Society. It features Revd. Doctor William Pearson, co-founder of the Royal Astronomical Society, and his wife and daughter (both named Frances). Pearson is demonstrating to his long-suffering family one of the orreries which he used to demonstrate the solar system in public lectures. After a lucrative career running a preparatory school in Surrey, and about the same time as he founded the Royal Astronomical Society, Pearson became rector of South Kilworth, Leicestershire, where he spent decades making careful positional measurements of stars as they crossed the meridian. Pearson’s presence is still felt in South Kilworth, where several of his buildings still stand, including his observatory.

Jeremiah Horrocks and his contemporaries 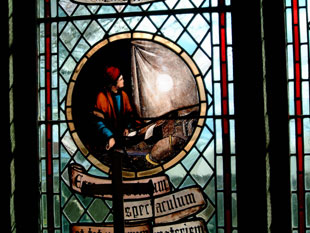 This is the stained glass window above the altar at St Michael’s Church, Much Hoole, Lancashire, and features Jeremiah Horrocks, who lived in the village, observing the Transit of Venus in November 1639 (we have no contemporary portrait of him, unfortunately). I have researched Horrocks’s life, and wrote about him in the June 2005 edition of the Journal (J.Br.Astron.Assoc. 115,3,2005). During the course of that research I found out that Horrocks was a correspondent of Samuel Foster of Coventry. Samuel Foster and his friends John Palmer and John Twysden left behind detailed records of years of observations from the Midlands, including a complete Metonic cycle of eclipses, and some of the first observations of the variable star Mira. 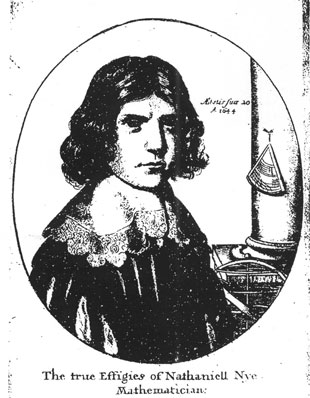 This floppy-haired chap is also widely regarded as a collaborator of Samuel Foster. His name is Nathaniel Nye and the portrait is by Wenceslaus Holler, a notable Bohemian artist from the seventeenth century. Nye, who is best known for his Civil War manual “The Art of Gunnery”, also described himself as a “mathematitian [sic] and astronomer” and wrote several almanacks for the “fair and populous city of Bermicham [Birmingham]” during the 1640s. These include several astronomical observations, including the 1639 solar eclipse, observed from Coventry. To my surprise I found that Nye also claimed to have seen the 1639 transit of Venus – unfortunately, his account is flawed and I don’t believe him (I think he had got wind of Horrocks’s at-that-time unpublished account, and was trying to pass it off as his own).

Hope you enjoyed the article. If you have any comments or information, I’d love to hear from you.

Click here to return to the Section home page. 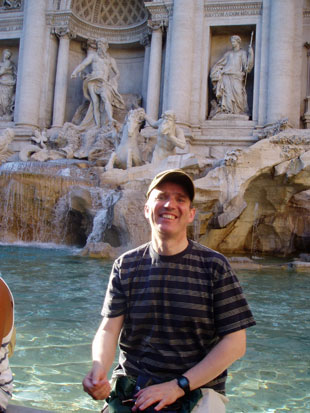