I. ALERT: Spots around the GRS this week:

It is worth keeping a close watch on the GRS and the SEB p. it over the coming week, for 2 reasons:

1) The SED is passing the GRS today; it is presently inconspicuous but it could re-appear as a major rift in SEBn p.the GRS in the next few days, as it did around Feb.29.

2) Some SEBs jetstream spots are arriving at the Red Spot Hollow (as pointed out by Maurice Valimberti), so they may be caught up in the rotation of the GRS in the next few days.

(Attached is a compilation of images over the last week.  Maurice particularly pointed out the white oval in STropZ on April 9.  I think this is not one of the little anticyclonic rings on the jetstream, but a white spot between them. Arrows indicate a tentative identification, but the spots seem to be rapidly changing and often indistinct, so more  v-hi-res images would be useful.)

II.  Pre-discovery passage of the South Equatorial Disturbance  past the GRS:

The new SED was discovered in late Feb. as it moved p. the GRS, and this is always the longitude where the SED is most evident.  The JUPOS chart by Hans-Joerg Mettig and colleagues implied that it had already been present for some months, so I have compiled images of the relevant longitude at the New Year, following its previous passage past the GRS.  The main focus of the SED can indeed be recognised as a bright white bay in SEBn/EZs (at L1 ~ 80), and there were numerous tiny projections p. it, and a light bluish tint f. it in EZ(S), as in late Feb.  However it did not produce a rift breaking through the SEBn; just a few white spots appeared within the SEB then faded again as the SED moved on.  We can conclude that the SED did exist in 2003 Dec./2004 Jan., but that it was more intense when discovered in late Feb.

White oval BA, and the S. Temperate region just f. it, attracted attention around the New Year.  Here is a short report and a compilation of the best images, describing and interpreting what occurred. Oval BA has been a well-defined white oval with a dark rim throughout the apparition.  Following it, there has been a rapid interconversion of different states of cyclonic structure in the STB. This year’s images are revealing small-scale phenomena that have not been clearly recorded since the Voyager imagery.

2003 Oct-Nov:  As shown by the JUPOS chart by Hans-Joerg and colleagues, oval BA was moving more slowly than other features in the S.Temp.R.  In particular a bright section (where both STZ and STB were white) was approaching it, and the short section of dark STZ/STB between them was rapidly shrinking.  This may be why oval BA suddenly accelerated around Dec.1.

Dec.2-17:  Following oval BA was a white sector of STB, 27 deg. long (labelled W on the images).  Although the resolution was insufficient to be sure, this may have been a closed cyclonic circulation, i.e. a small  ‘STB Fade’ sector.

Following this was a dark brown spot (labelled LBS), in the STZ, gradually fading. This may have been an anticyclonic ring like DS3 a few years ago.

Dec.29—Jan.4:  Following oval BA, v-hi-res images revealed that the white sector had turned into a turbulent patch (as pointed out by Isao Miyazaki and Jesus Sanchez).  The conversion is probably occurring on Dec.24 in Miyazaki’s image. This patch was a cyclonic ‘folded filamentary region’ in Voyager terminology (labelled FFR) – analogous to the post-GRS disturbance in the SEB, but not normally resolvable in the STB.  This was a short-lived state, marking the conversion of this cyclonic sector from a white oblong, through the turbulent FFR, to normal dark belt – again similar to phenomena witnessed in spacecraft movies.

Following this FFR, the LBS was still present in STZ, but faint.

The LBS in STZ had disappeared, but a different brown spot was visible from Feb.4-10 within the STB (labelled LBS2).  This was presumably a residual cyclonic circulation in the belt (a miniature barge); it was not detectable thereafter.  Conversely, just Sf. it on STBs, v-hi-res images from Feb.23 onwards (and especially March 6 onwards) revealed a tiny anticyclonic ring (labelled AWO).

IV.  A curious little spot in the S.S.Temperate Region:

A little S.S.Temp. spot, probably too small even to be noticed by traditional observers, seems to be another illustration of rapid interconversion of different states of cyclonic structure (although I await latitude measurements to confirm it is cyclonic).  In Dec-Jan. this was a small, very dark brown streak; but on Feb.10 it had become very red, and by Feb.27 it had disappeared.  (Perhaps careful tracking could show whether it turned into a white oval or other structure.)

It is shown in the attached image compilation. 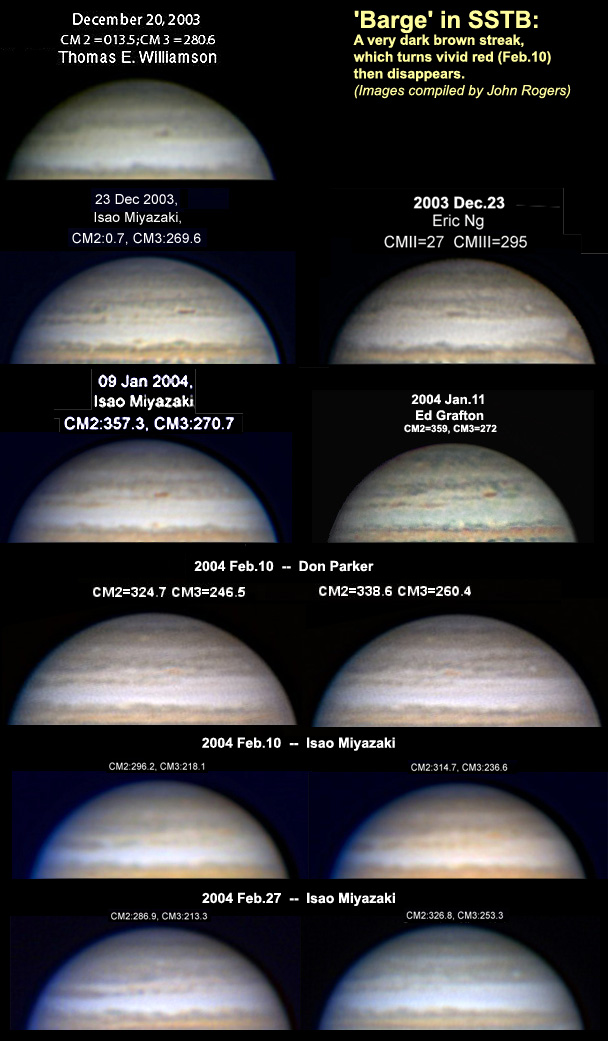