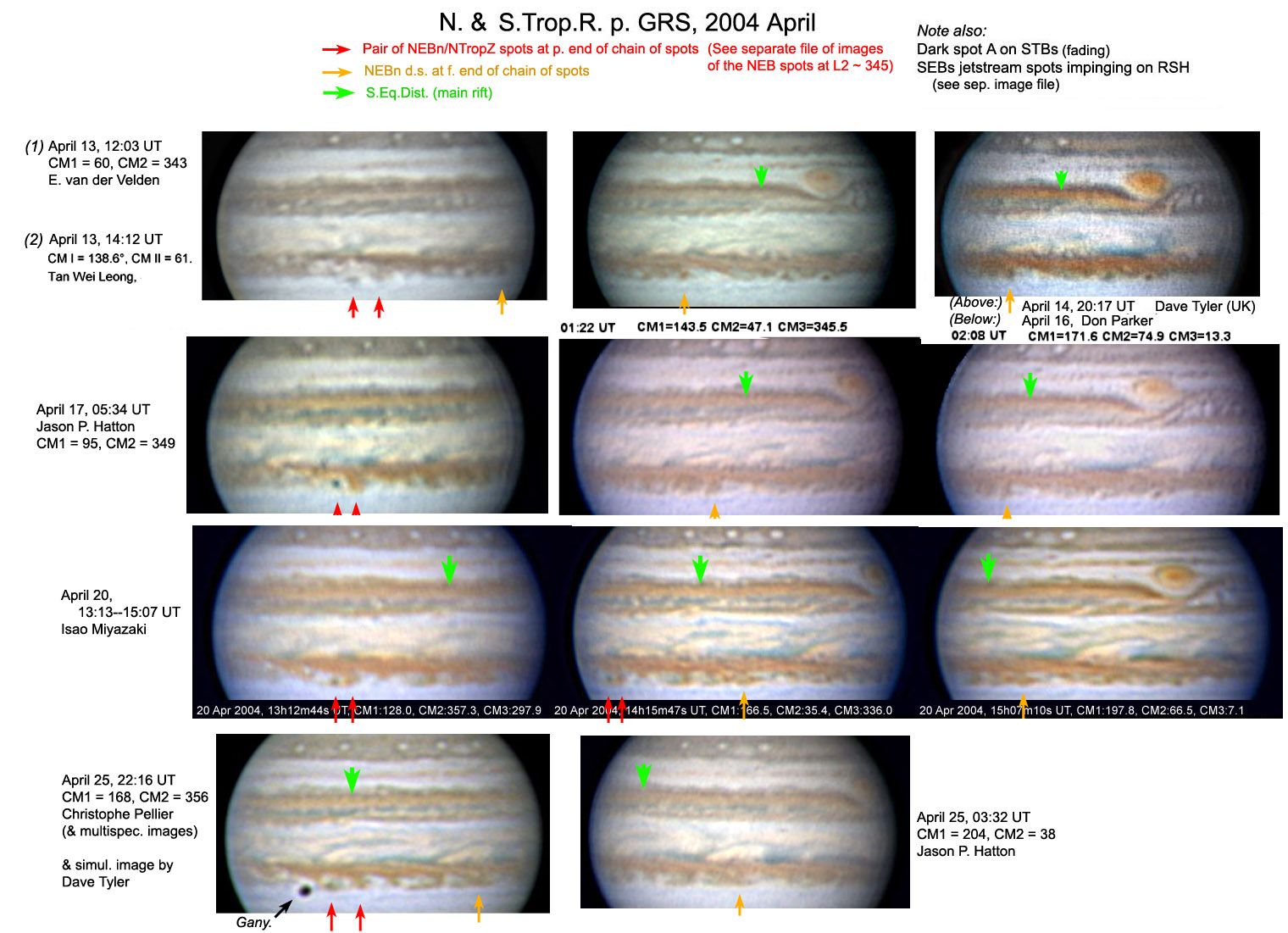 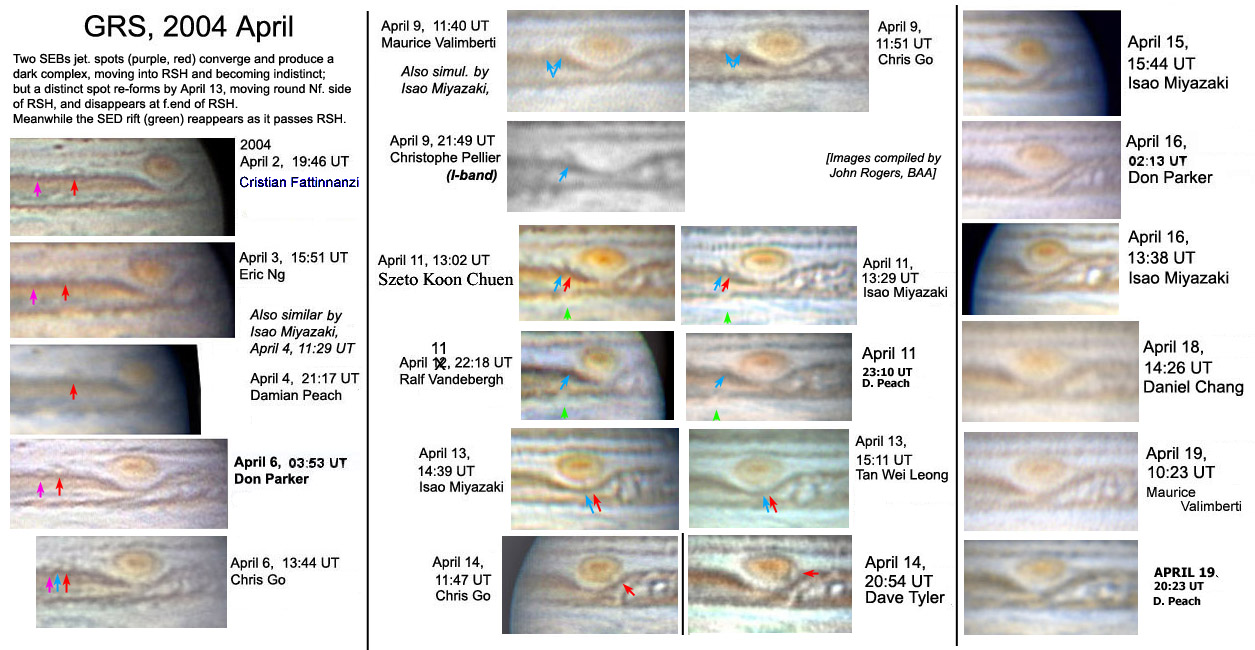 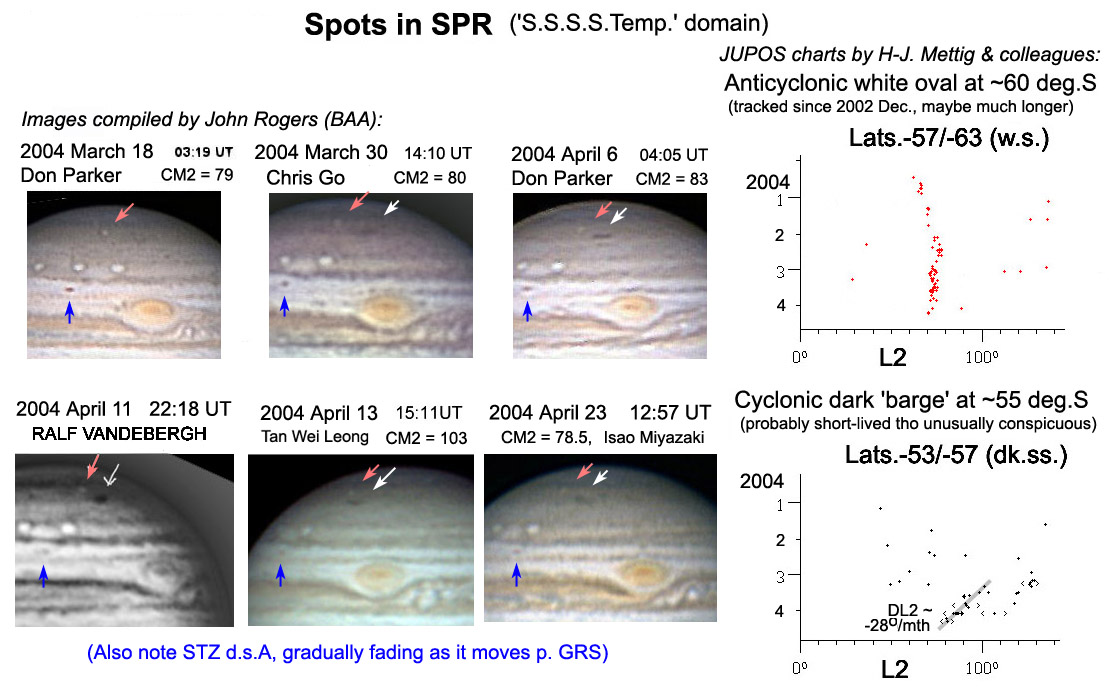 There has been a dramatic upsurge of activity from a source near L2 ~ 340, and it now looks very much as though a NEB expansion event is under way.  The attached compilation shows examples of the best images of this sector from April 13-25. (There are plenty of equally good images by these and other observers which are not included.)

In the first week of April, a bright new rift appeared in the NEB around L2 ~ 340, and a little dark spot appeared in NTropZ (at L2 = 344).  The new rift was at the f. end (and presumed source region) of the main rifted region, and the little dark spot was on the Np. edge of the small barge B9, which is the only one of the barges to have survived from the previous apparition. This little dark spot rapidly became reddish-brown; it is a typical little brown spot (LBS) of this latitude.

This apparition has been characterised by the appearance of the prominent rifted region, the disappearance of the long-lived barges, and the appearance of LBSs.  This is at least the fourth such LBS to form, all of them in the wake of the rifted region, just as its f. end passes a given L2. According to JUPOS charts, these LBSs do not move far in L2 but some of them oscillate to and fro.  This behaviour has been seen for several such LBSs from 1999 onwards, particularly during the early stages of the last NEB expansion event.

The new activity seems to form a focus for an expansion event. On April 13, another dark spot appeared at L2 = 336 in NTropZ, but this one is very dark grey. Meanwhile the chain of dark spots on NEBn f. this longitude, noted in previous e-mails, has become more extensive; the spots seem to be slow-moving but dark streaks are building up around them, and there is also expansion up to L2 ~ 95.

By comparison with previous expansion events in 1988, 1993, 1996, and 2000, it is likely that the NEB will broaden to the north at all longitudes over the coming months, either by local expansion (including LBSs), or by a wave of darkening spreading p. or f. around this latitude.  About a year from now, it is likely that a new set of dark barges and white ovals will develop in the expanded northern NEB, and the whole belt may become reddish.

After the SED passed the GRS, it did open up a rift in SEBn (green arrows on images) but it was small and short-lived.  The disturbance is still distinct, and it will pass the GRS again at the start of June.

On April 9, observers noted a prominent bright and dark spot just p. the GRS, and as expected, this did orbit around the N. side of the Red Spot Hollow (RSH) over the following few days.  The attached compilation of all the v-hi-res images shows what happened.  This was not a single SEBs jetstream spot entering the RSH; rather, two such spots converged and interacted around April 6, producing an unresolved complex which entered the RSH on April 9-10.  On April 11 it was very indistinct, but a distinct white spot with dark f. rim re-formed by April 13, moving rapidly round the Nf. side of the RSH and reaching the f. end on April 14/15.  Then it disappeared.

Observers have noticed a pair of spots high in the SPR, which are unusually prominent for these latitudes, at least in v-hi-res images.  One is a tiny anticyclonic white oval at ~60 deg.S, almost stationary at L2 ~ 73 [in March, but now accelerated]; this has been tracked since 2002 Dec. and maybe for much longer with very variable speed.  The other spot is a very dark oblong at ~55 deg.S, which is probably a cyclonic dark ‘barge’, and much more short-lived; it only developed in late March and already seems to be fading in late April.  It is moving with DL2 ~ -28 deg/mth, which is very fast but not unprecedented for these latitudes.  There seems to be a previously undefined domain from ~53 to 61 deg.S, which should be called the S.S.S.S. Temperate (S4T) domain, and these spots belong to it.

These image compilations also show that STZ dark spot A is fading now that it has moved p. the GRS.