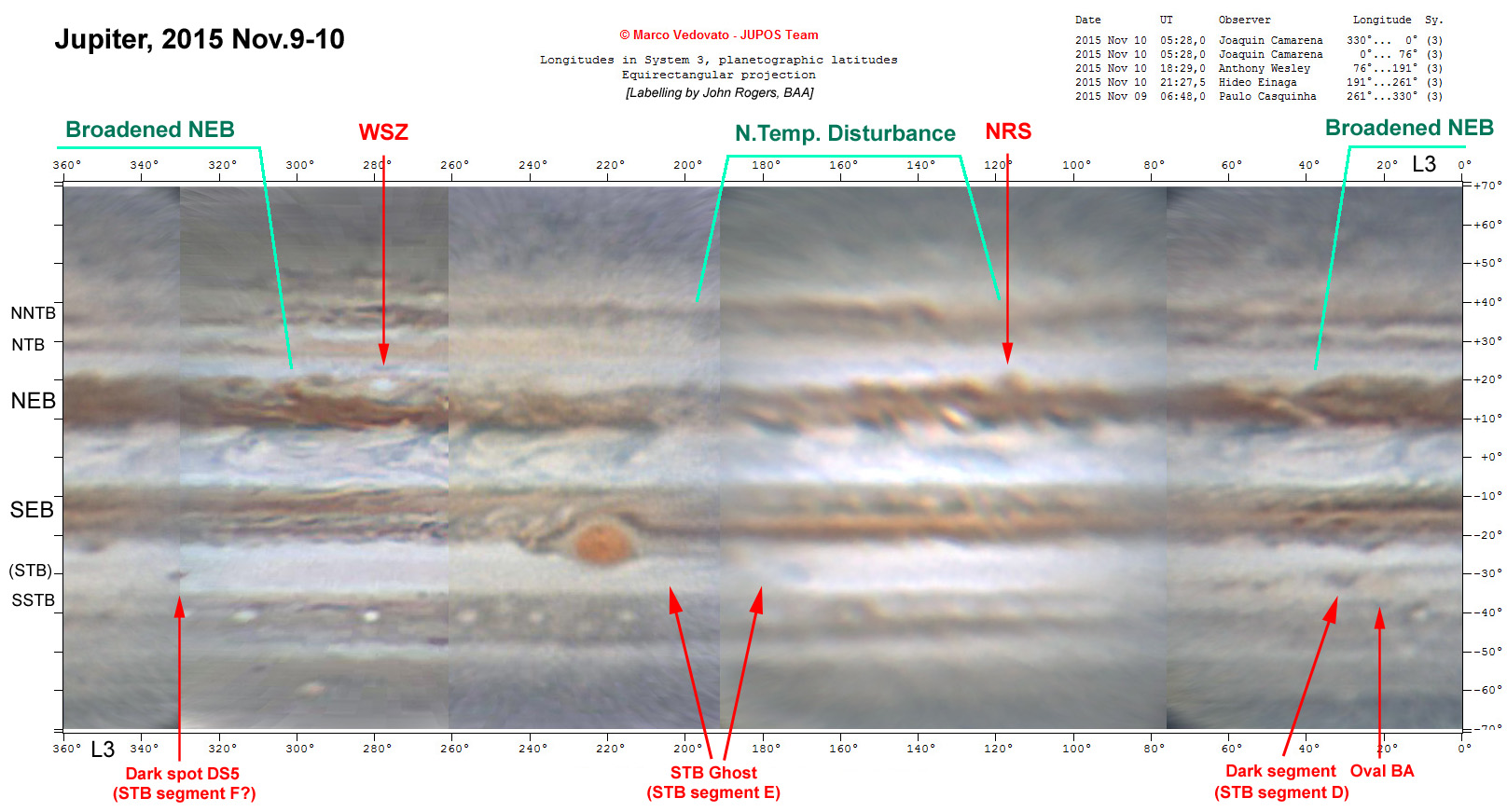 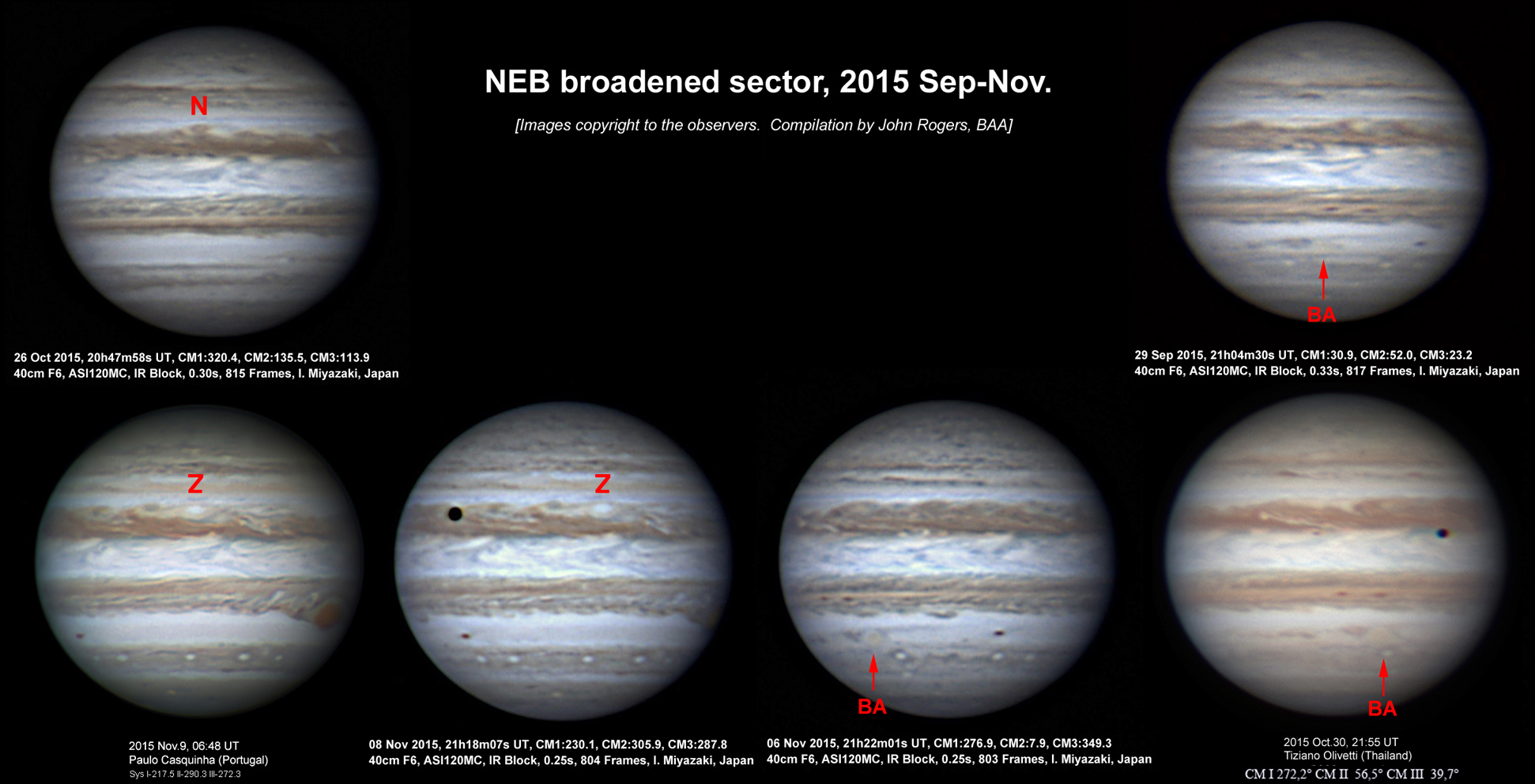 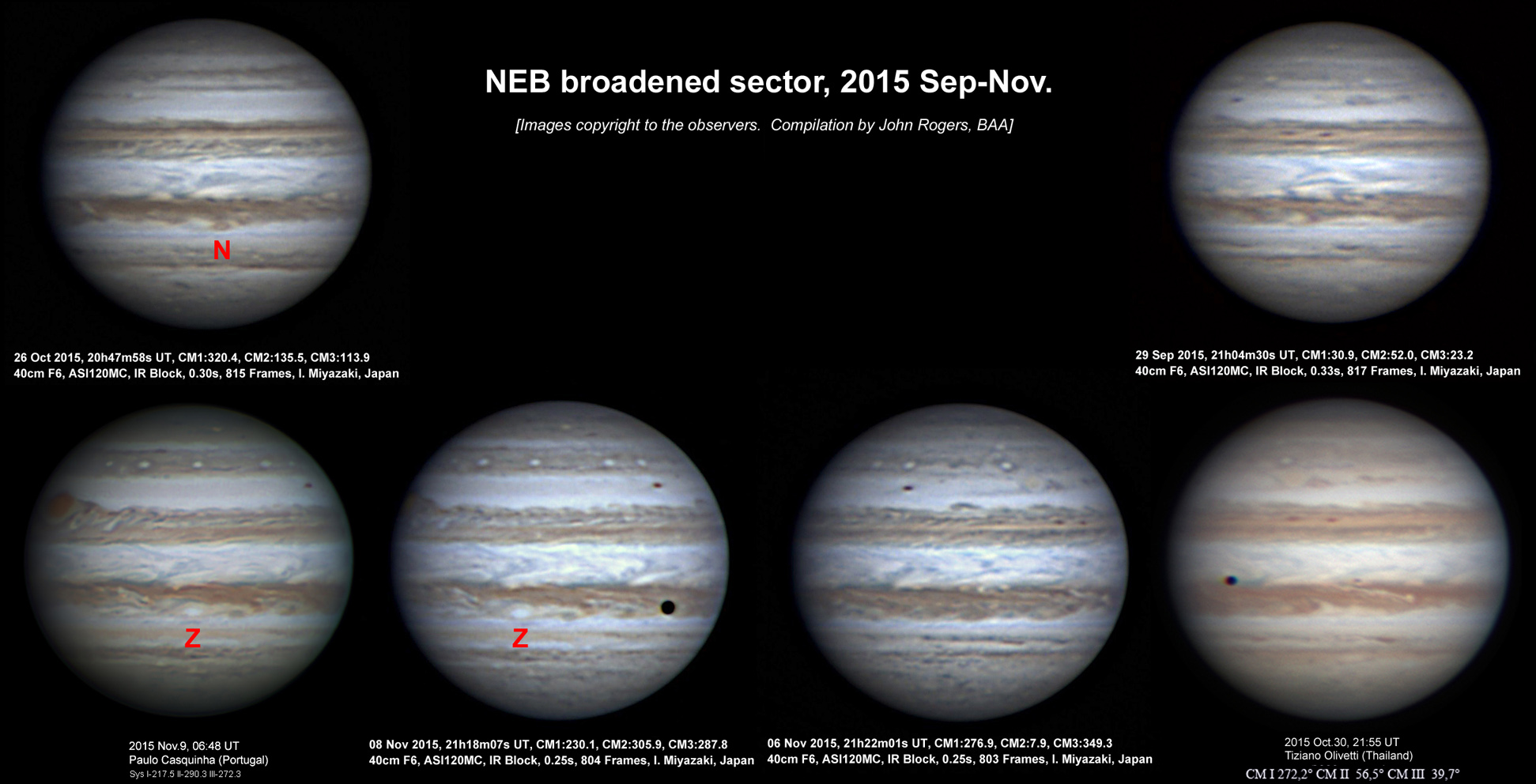 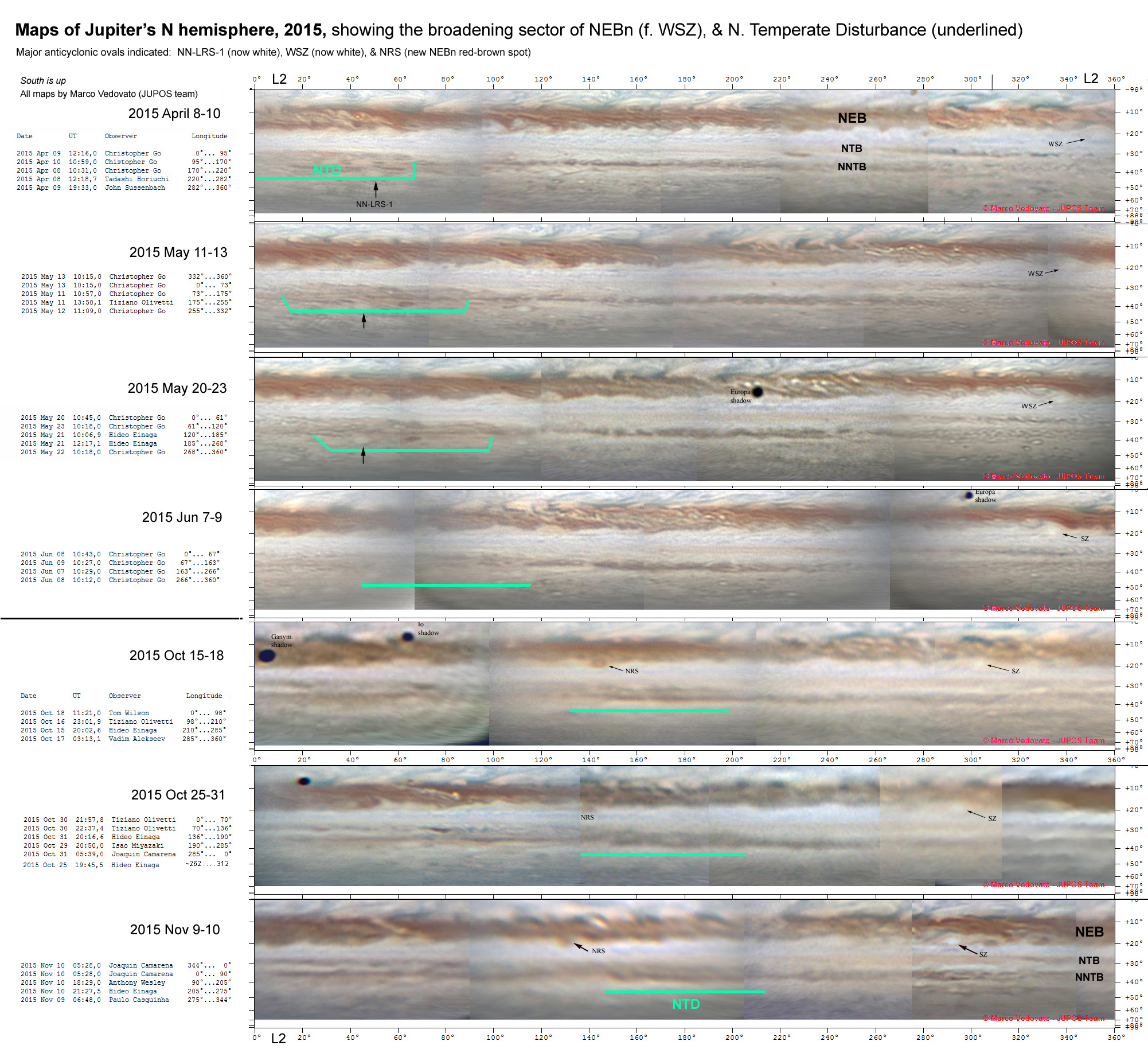 A NEB expansion event appears to  be underway, i.e., broadening of the NEB northwards into the N. Tropical Zone.  Such an event had been predicted to occur in 2015 [ref.1], and during the first half of the year, there were signs of increased emission of dark material northwards from the NEB, which Christopher Go and Christophe Pellier both suggested might be the early stages of the expansion event, but it did not develop convincingly.  Now, according to the latest maps produced by Marco Vedovato, there is a distinct broadened sector f. White Spot Z (WSZ), from L2 ~ 315-50 (L3 ~ 300-35).  The recent maps suggest that it is beginning to spread around White Spot Z.  Another notable feature is the dark spot at L2 = 291 (L3 = 277), named ‘Northern Red Spot’ (NRS) by Vedovato; such dark reddish-brown anticyclonic spots are often produced before or during NEB expansion events. (I have sometimes called them ‘little brown spots’, but this one is obviously redder than the adjacent NEB.)

This sector of NEBn f. WSZ had shown some transient broadening in 2014 Oct-Nov. (when a new slowly prograding rift developed p. WSZ), and it remained disturbed thereafter, sometimes with undulations, especially after the major rift passed it in late March.  This same sector has now broadened fully during solar conjunction.

In view of its very slow build-up, the present event looks similar to that in 2000 [ref.3], which likewise got under way during solar conjunction.  An especially interesting phenomenon in 2000 was a large-scale wave pattern seen in methane-band images as the expansion became complete; the methane-dark waves likely arose from the visible circulations along the NEBn, and coincided with thermal waves recorded by Cassini [refs.4 & 5].  However, this phenomenon has not been observed again at subsequent expansion events (except for a short sector in 2009).  One possible explanation is that in 2000, an array of barges still existed from the previous cycle and induced the prominent waves, whereas usually (as this year) all the previous barges have disappeared.

If this is really the start of a NEB expansion event, it is likely to spread around the planet over the next few months, and observations will be of great interest.  Will it spread steadily westwards, or will broadening develop irregularly at other longitudes, possibly with one or more secondary sources of expansion?  Will there be interactions with mid-NEB rifts, and effects on the NEBs dark formations?  Methane-band images, especially when the expansion nears completion, could show whether the wave phenomenon of 2000 is repeated. (More selective filters will probably be more sensitive for this purpose.)  About a year from now, when the belt is fully expanded, a new array of barges and AWOs should start to emerge.

Jupiter in 2000/2001: Part I:  Visible wavelengths: Jupiter during the Cassini encounter.

A review of multispectral imaging of the jovian atmosphere.

[Refs. 3 & 4 are available as PDFs:]  http://www.britastro.org/jupiter/publications_index.htm

Here are reduced-size versions of figures with north up: An annotated map of the planet, and a selection of the best recent images.  Larger versions, and alternative versions with soth up, will be posted in the following links.  In addition to the broadened sector of NEB, a darkened sector of N. Temperate Zone called a N. Temperate Disturbance is also marked. 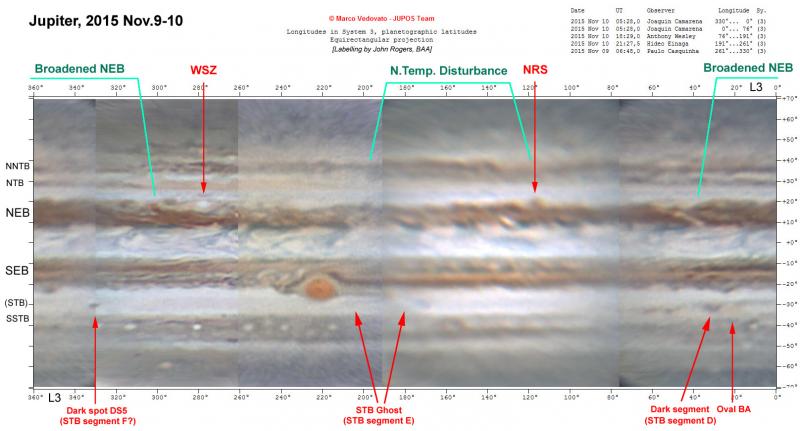 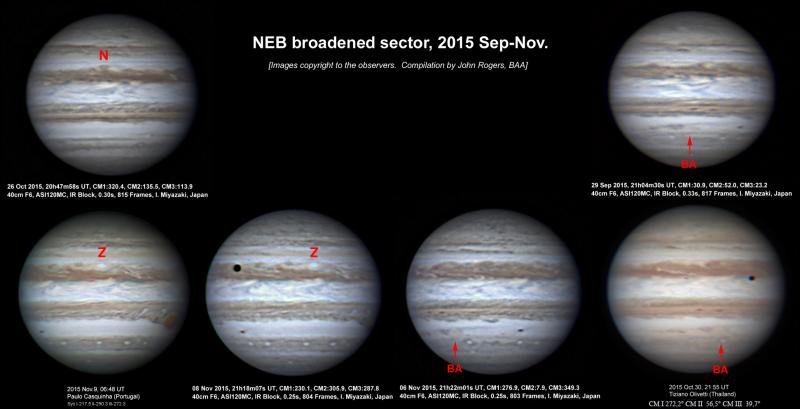