Internal rotation of the GRS.

With large telescopes, the new sensitive cameras, good seeing, and image derotation, several observers are now recording much detail within the GRS – especially Christopher Go (in the Philippines) and Tiziano Olivetti (in Thailand).  Go’s image on March 10 shows the detail particularly well.  Their images on March 5 covered 2 hours and showed the circulation very clearly. (The images were as follows:  Go, 15:46 & 16:45 UT; Olivetti, 16:46 & 17:11 & 17:53 UT.)

These images have been map-projected by Michel Jacquesson and animations of those projections are shown here – one of them stretched to make the GRS circular, thus allowing measurements of the rotation rate.  Despite the short interval, I measured position angles on this image set and found a rotation rate of 4.0 (±0.3) deg/hr, implying a period of 3.73 (±0.26) days.  This is the same period that we have obtained on many occasions throughout 2014 and 2015 (see previous interim reports).

Please scroll below the following images for an update with new animations from March 10-12 & April 6. 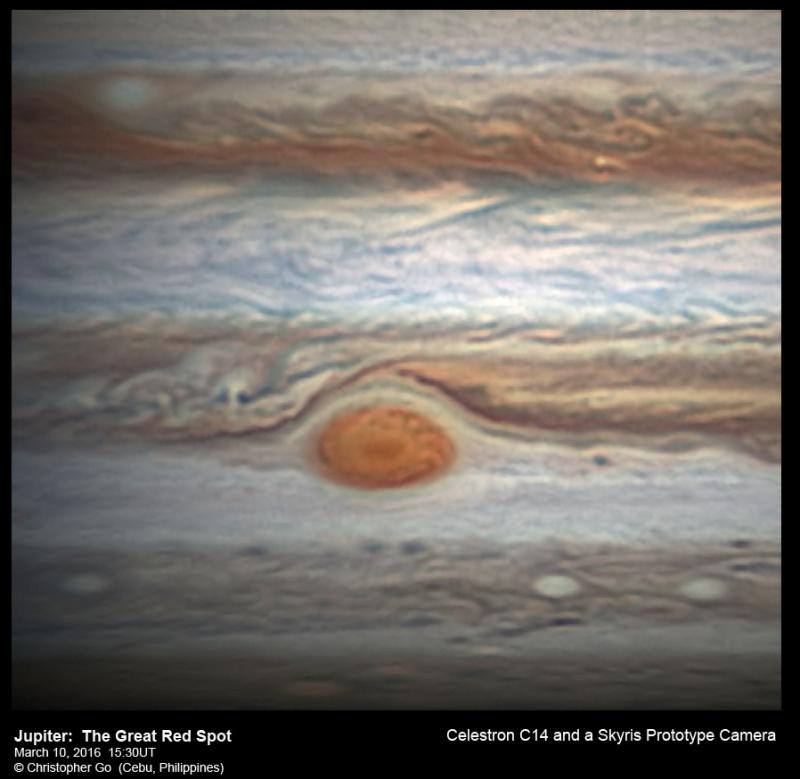 Another beautiful animation has been made by Kevin Quin from his own images taken on 2016 April 6, posted here:

Here too are animations of the GRS rotation on March 10 (two images by C. Go, 27 min apart) and March 12 (two images by T. Olivetti, 62 min apart).  The images were again map-projected by M. Jacquesson.