Juno’s perijove-7 will be on 2017 July 11.  Attached is a predictive map, showing how I expect the planet to look, and below I offer some recommendations for targets worth voting for.

This time there is one obviously favoured candidate: Juno will fly directly over the centre of the Great Red Spot (GRS)!  The JunoCam team say that one close-up of the GRS will definitely be taken, “but the rest is up to you!”.   To determine which targets will be imaged, everyone is invited to vote (from Tuesday June 27 to July 3) at:  https://www.missionjuno.swri.edu/junocam     So please go there and vote for your favoured 3  ‘Points of Interest’ (POIs).

In addition to the centre of the GRS, I would certainly recommend images to be taken over its north and south edges (POIs “Spot turbulence” and “Lower GRS atmospheric flow”).

But the map also suggests that Juno will also fly over two other important anticyclonic ovals: WS-b in the NEBn (POI: “White spot b”), and NN-LRS-1 in the NNTZ. (POI: “White tempest”).  These have less predictable motions than the GRS, so catching them is not 100% certain, but it is well worth saving one of your votes for one of them. In more detail:

WS-b in the NEBn is one of several anticyclonic white ovals (AWOs) which have formed this year, and now seem to be consolidating themselves into a typical array; WS-b merged with WS-c  on about May 20 (see our Report no.11, just posted at:  https://britastro.org/node/10609       JunoCam fortuitously caught a smaller new anticyclonic vortex at PJ6.  Now we have a unique chance to view a newly formed AWO during this dynamic phase.

NN-LRS-1 is a large oval which has been tracked for several decades, its colour varying between red and (as now) off-white.  It was imaged well at PJ3, but now the image quality is better and the altitude will be lower, so it is well worth imaging again.

Finally, it is always worth imaging the NEBs in case Juno passes over a dark formation (‘hot spot’) (POI: “Hotspot”).  As of mid-June, this seems possible, or Juno could again catch the ‘festoon’ structure just west of the dark formation. 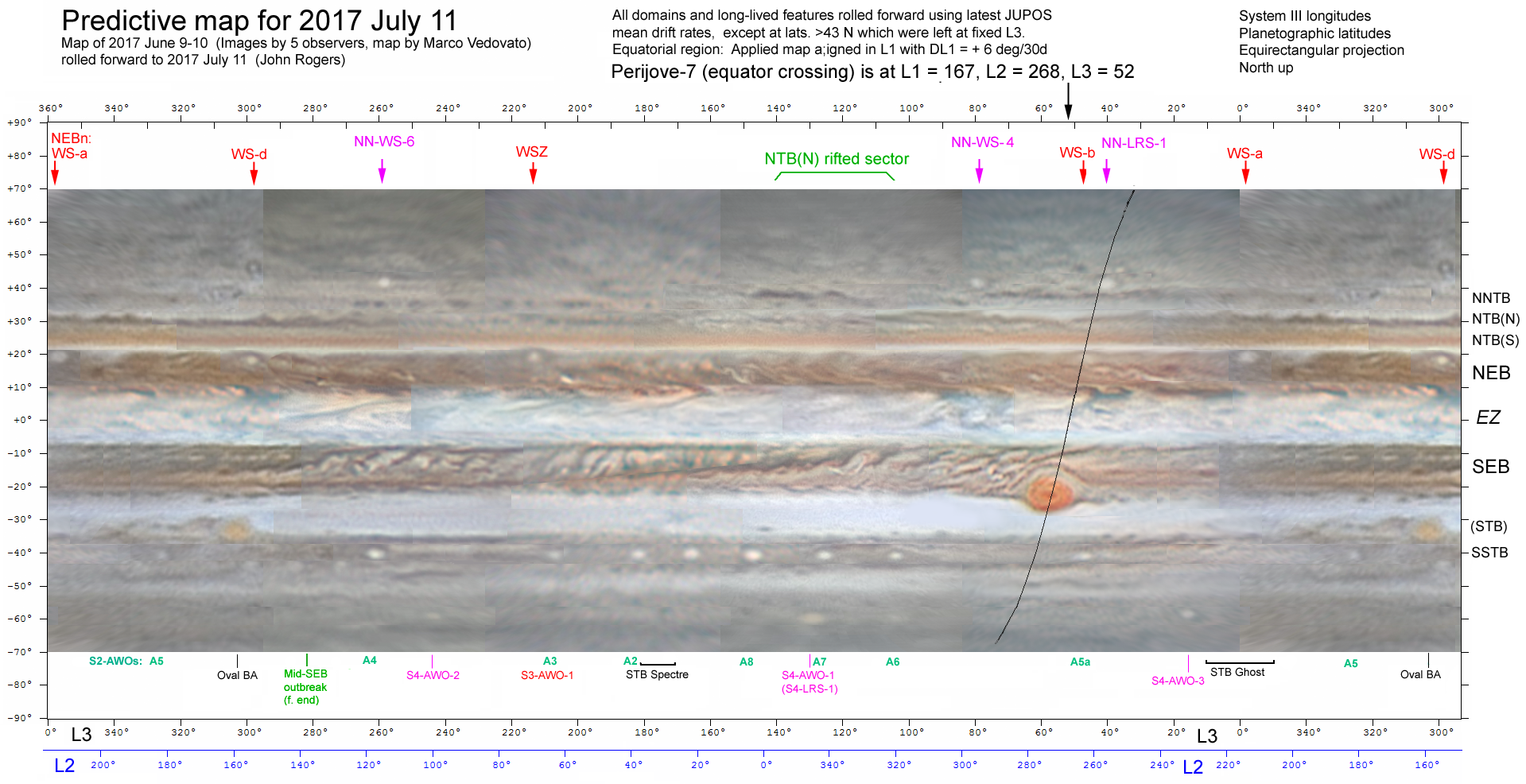