This is a summary of the main phenomena observed so far this year, up to Feb.25, with an annotated map from Feb.18-19 (Figure 1).

The full report plus miniature figures is posted as a PDF here:  Report-no-6_2017mar3.pdf

The full-size figures are posted as a ZIP file here:  Jup-report-no-6_2017mar3_FIGURES.zip

The text and map are copied below.

This follows on from Report no.4. It is due to the efforts of many imagers, whose work is gratefully acknowledged.  (Some sets of images are shown as Figures 3-5.)  It is also informed by the latest JUPOS data, which gives drift rates for many features.  As usual, speeds are given as DL2 (degrees per 30 days in System II) unless otherwise stated.  DL3 = DL2 + 8.0 deg/month [not -8.0 deg/month as it says in the PDF report]. 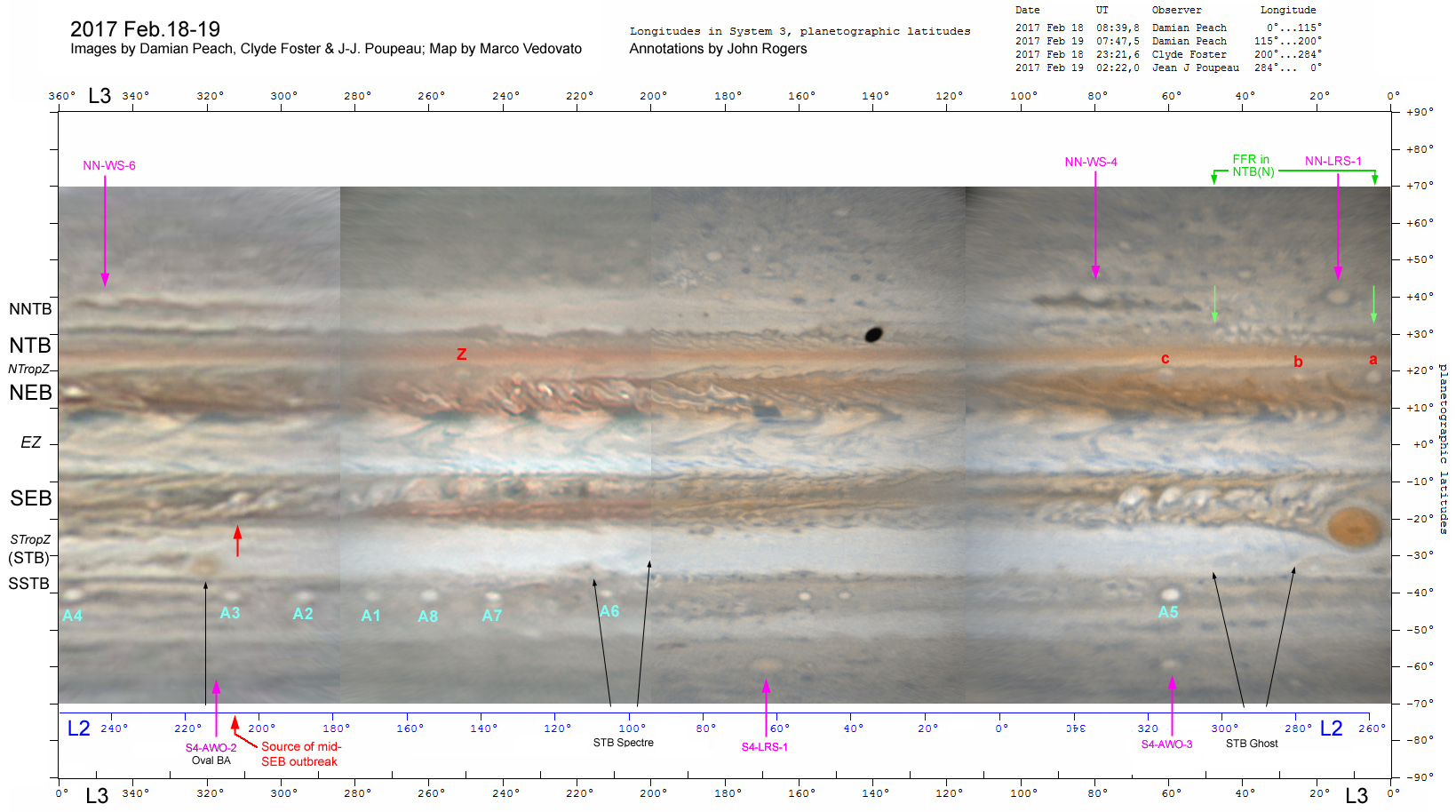 Three long-lived anticyclonic ovals (AWOs) in the NNTZ are tracked; all three are now methane-bright.  LRS-1 has reappeared impressively as it has developed a dark grey collar, although internally it is still pale. It is currently near-stationary (DL2 = -1 deg/month). WS-4 and WS-6 are both bright white, moving faster.

The NNTB, which up to 2016 Dec. was present all around the planet and carried many dark spots in the NNTBs (N2) jet, is now absent over >190º longitude (2017 Jan. & Feb.; Figure 2).  Activity on the NNTBs jet has not completely stopped since the great NTBs outbreak, as the JUPOS chart still shows at least 4 dark spots have been moving on it at any one time, but both the density and size of spots seem to be much less than in mid-2016.  I think that the NTBs outbreak has probably whitened much of the NNTB and diminished the visible activity on the NNTBs, as in most previous such outbreaks, even though modern hi-res images still reveal some residual activity.

The revived NTB continues to mature.  The orange NTB(S) is still outstanding, and almost featureless.  The NTB(N) was all turbulent in Dec., then became a well-defined, very dark grey belt at most longitudes in Jan., which is even more regular in Feb.  The latest v-hi-res images (Feb.23-25) show a notable wave-train along its north edge at L2 ~ 225-275, with wavelength 5-6º.  In one sector there is a turbulent (‘rifted’) region (labelled FFR in Figs.1 & 2), drifting with DL2 ~ +17 deg/month, i.e. the usual N. Temperate Current A.  Remarkably, its track suggests that it is the same rifted region that was present in mid-2016, which thus seems to have survived the NTBs jet outbreak!  Since Jan., several individual spots have also been tracked in the NTC-A, and there are hints of some on the retrograde jet.

Juno took close-up images of the NTB at perijoves 3 and 4 (Dec.11 and Feb.2), dramatically showing the complex texture of the reviving belt. (They did not cover the rifted region.)

The highly disturbed NTropZ has now resolved into a narrow, bright, yellowish-white strip alongside the diffuse orange NTB(S), and a much more disturbed grey strip alongside the NEB.  Spot Z, which disappeared into a dark grey mass in Jan., is now reappearing as a white spot within that mass (Figure 3, & more clearly on Feb.17-24).  It gradually accelerated in Dec. to DL2 = -23 deg/month, and has moved at DL2 = -20 deg/month from mid-Jan. to mid-Feb.  Also, three other off-white ovals have appeared in the same latitude (19-20ºN) with similar rapid drifts (labelled a,b,c on Fig.1).

These AWOs are all embedded in long stretches of dark grey material, as if the NEBn is again expanded northwards to ~21ºN in these sectors. At other longitudes, the NTropZ south of 21ºN is still very disturbed with streaks aligned with the NEB.  As discussed in Report no.4, the NEBn has been greatly disrupted both by the NTBs outbreak and by the new rifts in the northern NEB.  It is  not clear whether this behaviour fits into known patterns of activity.

The new rift systems in the NEB, which appeared in late 2016, have continued to develop. For example, on Jan.15-21, rifts brightened and proliferated within the expanded rift system A while passing the (then obscure) spot Z (Fig.3). By Feb.18-19 (Fig.1), all this amounted to a continuous rifted sector from L2 ~ 60-250; the p. half was an elaborate rift system derived from rift A, while the f. end was a new rift D.  Rift D first appeared as a brilliant white point on Feb.10 at L2 = 255 (Fig.5), which rapidly expanded over the next few days, then another such point appeared within its remains on Feb.17.  Its drift up to Feb.25 was unusually slow, ~-0.8 deg/day, like rift B before it.  Rift D appeared just Sp. the new AWO ‘a’, yet again suggesting that rifts tend to appear or revive where the zonal flow is perturbed by these circulations.

Methane-band images by Chris Go and others show prominent methane-dark waves over sectors of the NEB, as in early 2016 (e.g. on Jan.31 in Fig.4).

There are 10-11 major NEBs dark formations, irregular but actually persistent throughout Jan-Feb., according to the JUPOS chart and Marco Vedovato’s maps.  Most have DL1 ~ +5 to +6 deg/month.  Some are large with prominent festoons in the EZ(N) and sometimes bright plume cores.  There have been several examples where they appear to be disrupted by passing rifts.

The EZ is normal, with only a faint equatorial band, and a narrow bright EZ(S).

The mid-SEB outbreak, which started on Dec.29 at L2 = 208, continues to produce new white spots at the source (within a few degrees of the same L2), and these have expanded northwards and prograded as usual to produce increasingly extensive rifts (Figs.3 & 4).  A full accounting of the white spots that have appeared at the source remains to be done, but examples can be seen appearing on Jan.14 and 22 in Fig.3.  Most of these white spots are methane-bright. The JUPOS chart indicates DL2 ~ -22 for the leading edge, probably a succession of short-lived white spots travelling rather faster.

On the SEBs, v-hi-res images show small-scale wave-trains with wavelength ~ 4.3º to 5.4º, p. the mid-SEB outbreak.  No features on this retrograding jet have been tracked yet this year.

Oval BA is still strongly orange with a whitish core, and only a faint grey collar. Its speed continues to vary; it has decelerated again to DL2 = -10.8 (±0.3) deg/month (Jan-Feb.), but this may be temporary as it has been oscillating with period ~2 months since early 2016.

Following oval BA, since it passed the GRS, the small dark spot has enlarged again, and minor streaks and faint shading have developed from here to the STB Ghost.  Could this sector, which is now passing the GRS, be about to turn dark and restore a segment of the missing dark STB?

The STB Ghost and Spectre are unchanged and drifting with DL2 = -17 and -15.5 respectively.