The full-size figures can be downloaded as a ZIP file:   Report_2018-no-1_Figures.zip

This report has 3 sections:

I.  The present state of Jupiter’s atmosphere

Summary:  There have been important changes in several belts on Jupiter during solar conjunction, which presage exciting events to view in 2018.  The main changes are the evolution of the wave pattern in the NEB into a chain of new circulations; the appearance of a new S. Tropical Disturbance; very recent resumption in rifting in the SEB; and the approach of the STB Ghost to oval BA. 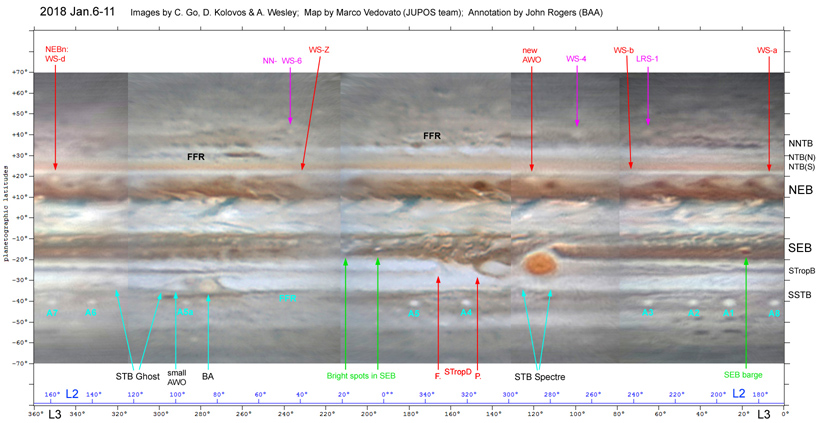 –with predictive map, and notes on promising targets for imaging.

In 2015 March, I posted a 3-year weather forecast for Jupiter:  http://www.britastro.org/jupiter/2014_15reports.htm [go to Report no.5].  All the large-scale events predicted in it have occurred or (in the STB) are about to occur, although the predicted timings were not accurate, some being out by more than a year.  I don’t think that a definite new forecast is possible at present, because in each of the major domains there are no clear indications as to whether a new cycle will start soon or not.  So here I outline the possible scenarios for this year.

The NTB will continue to settle down after the 2016-17 Revival. It could generate impressive waves and dark spots on its N edge, though perhaps not, as the NTB(N) is currently fading.  If the rifted region persists, it could generate a dark sector of NTZ (N. Temperate Disturbance) f. it.

The northern NEB is currently fading and  receding after the NEB expansion event of 2017, creating an impressive array of many barges and some AWOs on its N edge.  This may produce an NEB of normal width for the next 2 years or more.

However,  in Wesley’s image on Jan.16, the N edge of the dark brown NEB has receded so far southwards that I begin to wonder whether it will become as narrow as in 2011-12, leaving the barges very dark and detached; this could set the stage for a vigorous Revival in 2019-20.

The STropD will interact with the GRS in the next few months; the dark p-STropD structure could flow around the S edge of the GRS and re-form p. the GRS.

The big question is whether the SEB will become completely quiet and then proceed to fade , or whether it is now returning to normal activity with the perennial rifting f. the GRS.  The quiescence of the SEB in the autumn, along with the appearance of the STropD [see Appendix below], suggested that the SEB might be due to fade in 2018; this would set the stage for a Revival, which would not begin before late 2018.  But the recent upsurge in rifting activity suggests otherwise: if it persists, maintaining the usual rifted region f. the GRS, the SEB will not fade.

The STB Ghost will soon collide with the dark spot f. BA; on present courses this would happen in late April, but interaction could begin at any time in the next six months.  Spectacular effects could occur suddenly, as happened on 2010 June 17 when an identical feature, the STB Remnant, underwent an identical collision. Whatever the short-term events, I expect the overall effect to be as in previous such events, esp. in 2010 [see references in Appendix]: the STB Ghost will convert into a dark turbulent STB sector f. oval BA, oval BA will accelerate, and dark spots will be emitted p. on the STBn jet and f. in the STZ.

It is likely that a new structured sector will appear in the next year or two, probably starting off as a small dark cyclonic spot tens of degrees p. oval BA [see refs in Appendix].  The S. Temperate domain may be due for even more dramatic change, viz., a revival of the now-absent STB, as last happened in 1993 [see Appendix].