There has been great interest in the convergence of two anticyclonic ovals in the S4 domain, LRS-1 and AWO-2.  They were converging so rapidly that it seemed likely that they would be merging at the time of Juno’s PJ15.  However, in the few days leading up to PJ15 they suddenly stopped converging and rebounded without merging.  They were tracked particularly by Andy Casely and Clyde Foster. Here is Andy Casely’s summary, and his final charts of them are shown below:

“They spent much of the season approaching each other, with LRS-1  1.5deg N of AWO-2, and in different steering currents. Near to PJ15, LRS-1 moved south by 2 degrees or so, and moved away once it was further south. The possible collision didn’t happen. But closest approach was about PJ15, just as they crossed in latitude. LRS-1 is now back slightly to the north of AWO-2 in mine and Clyde’s latest frames up to 30th Sept… will they approach again?”

The following comments are re-posted from my report on Juno at PJ15:

At PJ15 they came across the dawn terminator shortly after south pole crossing, as expected, so they were well imaged (Figure 12). They were visibly interacting and still had almost minimum separation, which was less than the radius of either.

I suspect the reason they did not merge is that the adjacent large FFR confined them in latitude so they could not swing round each other.  In contrast, when AWO-2 was imaged at PJ11 just after it apparently merged with AWO-3, there was no FFR alongside it.  I suspect that many of the speed changes shown by AWOs in the high-latitude domains are due to interactions with FFRs which often cannot be resolved by amateur images: specifically, that high-latitude AWOs naturally drift fast, but can be blocked by encounters with slow-moving FFRs [see our recent long-term report on the N3-N6 domains, https://www.britastro.org/node/11328].  This encounter may have been a variation on this theme..

In the methane band (PJ15 image 66, not shown here), it is again notable that LRS-1 is methane-bright while AWO-2 is barely detectable. 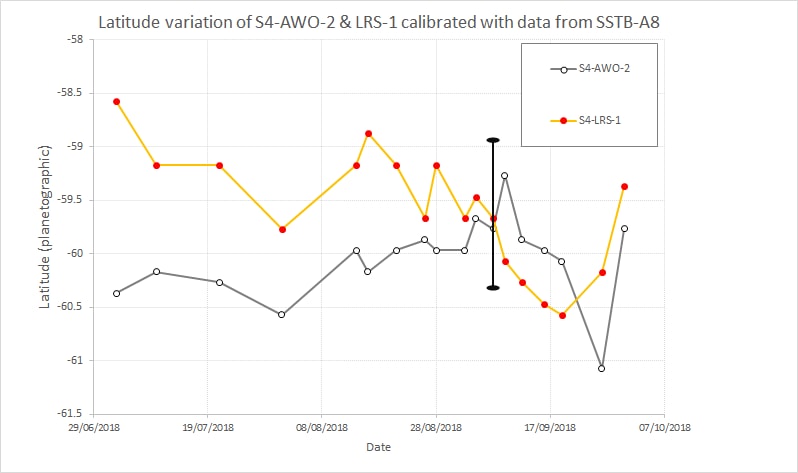 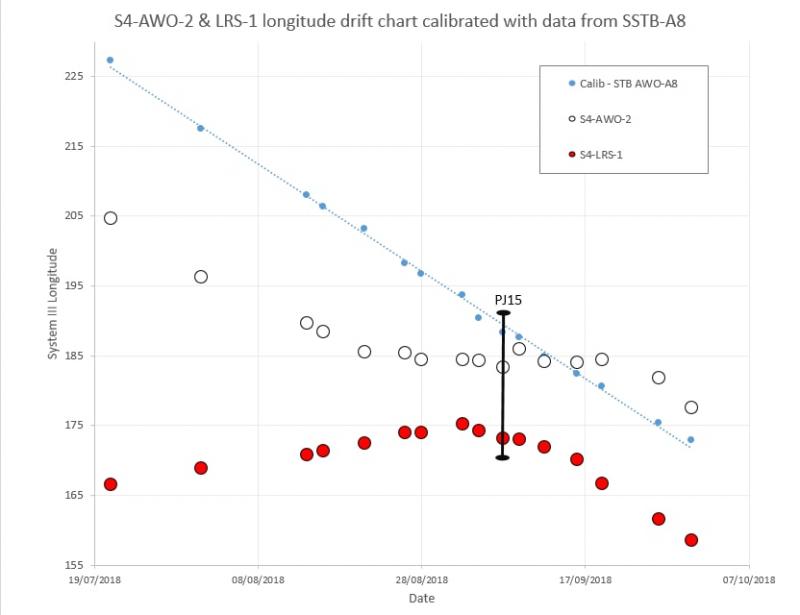