Jupiter in 2019, Report no.10: The GRS in 2019 and its interaction with retrograding vortices

The 2019 observing apparition of Jupiter was notable for the apparent shedding of red strips from the periphery of the Great Red Spot (GRS), which would become generally known as the GRS flaking events. This report records and describes the amateur ground-based observations of these events.  The intent is to provide a comprehensive record of the amateur observations covering not only the GRS flaking events, but also the associated events and features that were observed. Where relevant, images from the JunoCam instrument on the NASA Juno orbiter are included for comparison.

Early in the apparition, images both from amateurs and from JunoCam repeatedly revealed red strips described as ‘blades’ or ‘flakes’ which appeared to be drawn out from the west side of the GRS.  They were bright in the methane absorption band (‘methane-bright’) like the GRS itself. This phenomenon had rarely been recorded before, but became frequent and increasingly prominent during 2019.  The flakes appeared to be induced by rings (anticyclonic vortices) which travel along the retrograding jet on the southern edge of the South Equatorial Belt (SEBs) until they enter the Red Spot Hollow (RSH).  We realised that the flakes typically appear several days after the entry of  a ring into the RSH; the ring is deformed until it is no longer recognisable but we propose that, during this process, it draws red, methane-bright material out from the GRS.  From 2019 April to June, some of the resulting flakes were very large, and appeared at the east as well as the west end of the GRS, apparently due to material or disturbance circulating round the periphery of the GRS.

Several other notable phenomena occurred in association with the flaking events.  A large dark ‘Hook’ grew out of the SEBs on the west side of the GRS in March-April, resulting in easterly recirculation of dark material past the GRS and the development of a new South Tropical Band east of the GRS.  The S. Tropical Band was complicated by transient wave-like patterns prograding on its south edge, and by the formation of two rings prograding along it, all of which were apparently related to the emergence of red flakes on the east side of the GRS.  After the major flaking events, some later retrograding rings failed to penetrate to the west end of the GRS, one possibly because it was diverted north out of the RSH, and two because they drifted south in the S. Tropical Zone before reaching the RSH.  But from 2019 September onwards, more SEBs rings entered the RSH and again induced red flakes.  The GRS itself shrank considerably during the main flaking period, from 14⁰ long to 12⁰ long, but recovered later in the year.

This is Part I, containing our full observational account.  Part II (to be posted subsequently), will include an expanded discussion with consideration of previous records of SEBs rings entering the RSH and of flakes from the GRS, which will be presented in Appendix 1.  Appendix 2 will describe the ‘pro-am’ interactions that developed in relation to these topics, particularly involving the Juno mission.

Part I miniature figures are in this PDF:  GRS-2019-report_PartI (2020june)-Figures.pdf

Part I full-size figures are in this ZIP file:  GRS-2019-report_PartI_Figures.zip

The list of observers is on our ‘Jupiter in 2019’ page along with this report, and the list of those who contributed to the ALPO-Japan coverage is here: Table-of-observers-2019-GRS_ALPOJ.pdf

This is Fig.6 which summarises the flaking phenomenon: 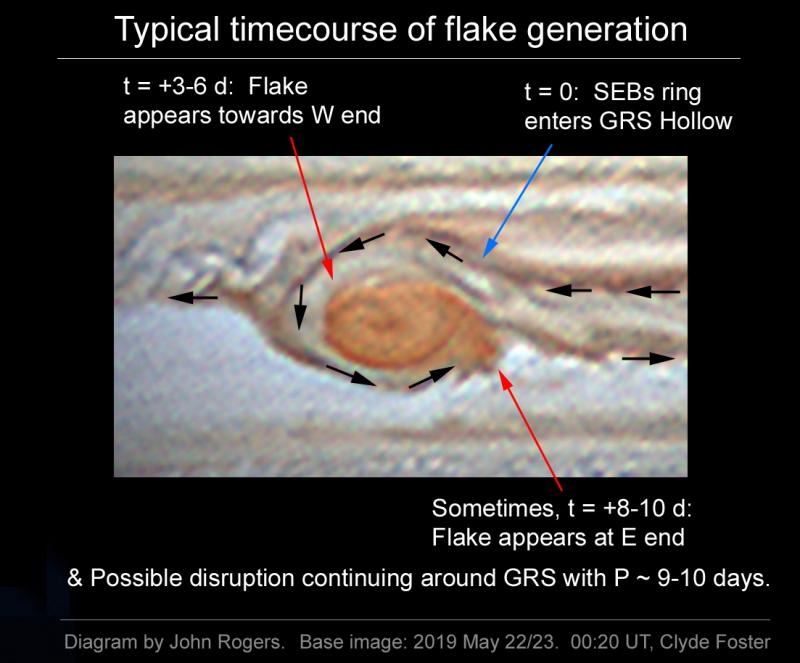