Juno flew past the following (f.) end of the GRS at Perijove-18 on 2019 Feb.12, so it was important to get a series of ground-based images to follow the time-course of transient features in the region. Here is a compilation of those images from Feb.6-21, following on from the set shown in our Report no.1.  Congratulations to Clyde Foster, Phil Miles, Trevor Barry, Andy Casely, Michael Wong, and David Carlish, for their perseverance in obtaining these morning images.  There are two features of special interest as seen in the JunoCam images:

1) The red streak or ‘bridge’ that appears to be streaming out of the f. end of the GRS – as also shown in the PJ17 images, and again in amateur images from Jan.25 to Feb.2 (see Report no.1).  (Clyde Foster says it “almost looks like the GRS is shedding repeated ‘turbine blades’.”) On Feb.12, Foster’s RGB image did not clearly show the ‘blade’ as red but it was just resolved (bright) in Miles’ IR and CH4 images.  Observers were not able to get v-hi-res images until Feb.18-21, when a reddish streak could be seen from the GRS to the SEBs (apparently bright in CH4) – possibly the same one seen at PJ18, now extended.

In the ground-based images alone, the streak was so small that one would not have noticed anything unusual.  Nevertheless, PJ18 confirms that this has recently become a frequent phenomenon, as though such streaks are being shredded off the periphery the GRS near its f. end.  Looking back through some maps from Hubble, no such feature was recorded in 2014, 2015 or 2016; but the paired maps of 2017 Feb.2 showed a similar red ‘blade’, and gave an excellent display of its dynamics over 10 hours.  The GRS periphery has also appeared ragged in subsequent Hubble images: on 2017 April 3 and July 11 there was a smaller or weaker reddish streak near the f. end, then on 2018 April 1 and 17, with the S. Tropical Disturbance streaming past the GRS, there was the large ‘blade’ at the p. end that was imaged at PJ12.

2) The convective ‘rifted region’ of SEB f. the GRS, where activity has been sputtering on at a low level in recent months.  On Feb.6 and 9, there were just one or two tiny bright white spots here. On Feb.12, Juno’s PJ18 images showed three such spots to be small brilliant plumes within a larger rifted region, even though the spots were small and not very bright in amateur images on that day.  Only the v-hi-res amateur images on Feb.18-21 had the resolution and frequency to allow these rapidly changing small features to be tracked: there were up to four such spots, changing their relative brightness over the 3 days. Evidently the convective activity is indeed ongoing. Indeed, subsequent images (T. Olivetti and Paul Maxson, Feb.23) show the activity has increased to a respectable level.

An edited stack of the best images is shown below.

The full set, with full-size images and data, can be downloaded here:  Set_2019feb_GRS&PJ18-track.jpg 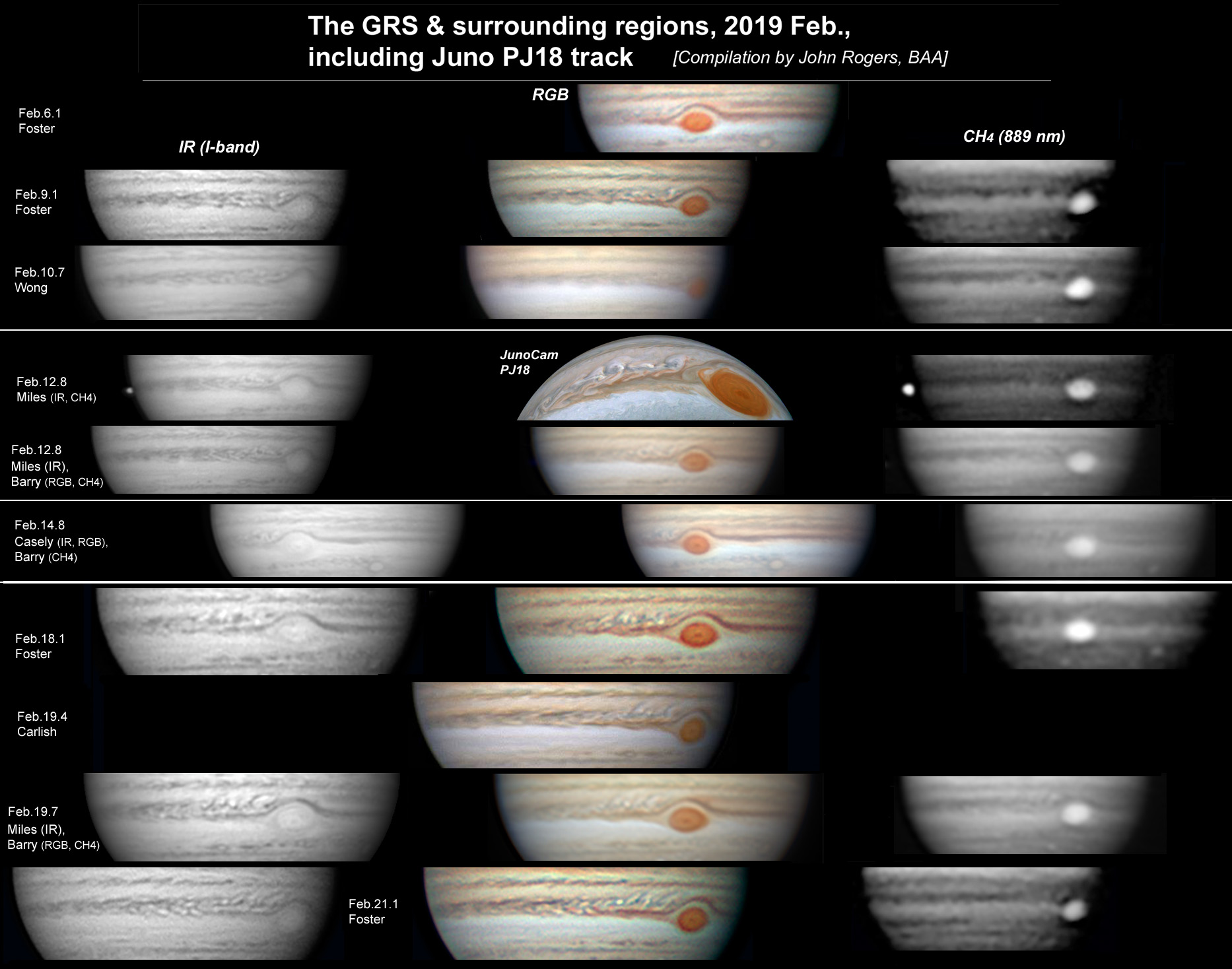