Jupiter in 2019, Report no.5: Continuing disruption of the GRS

Activity around the GRS is particularly interesting and rapidly changing at present, as described in Report no.4.  This supplement gives some updates (text and figures below) and additional links.

Here are links to other recent summaries of the activity:

An abstract for the European Planetary Science Congress by Clyde Foster and colleagues:

EPSC-DPS2019_Foster_submitted.pdf   [posted with this report]

Links to news items about it on Spaceweather.com and Sky&Telescope:

Shinji Mizumoto continues to produce a detailed series of maps showing the events, in both RGB and CH4. And in addition to the animations linked in Report no.4, Shinji has updated his animations, at:  http://alpo-j.asahikawa-med.ac.jp/Latest/j_Cylindrical_Maps/j19_Maps_Animation_GRS.htm

Marco Vedovato is also producing regular maps and his latest animation (soon to be updated) is at:  http://pianeti.uai.it/images/J_Map_L2_2019_GIF.gif

Another animation of recent activity (May 5-19) has been posted by Andy Casely:   https://photos.app.goo.gl/NKD1gQ2nbBjXSYHo6

Also attached (below) is an animation of three images taken at 10-hour intervals on May 22-23, by Jose Luis Pereira (Brazil), Anthony Wesley (Australia), and Clyde Foster (S. Africa).  Blinking these images shows the red blades moving around the GRS – and also the SEBs wave-train and ring, retrograding towards the GRS, as well as activity in the post-GRS rifted region, and many other winds. (Someone may be able to do better with some derotation).  (Other observers who produced good images on these two dates included Barry Adcock, Trevor Barry, David Carlish, Fabio Carvalho, Joaquin Camarena, Andy Casely, Chris Go, John Kazanas, Niall MacNeill, Darryl P. Milika, & Isao Miyazaki.)

TEXT OF THIS REPORT:

Incoming ring-shaped vortices on the SEBs jet are causing red ‘blades’ or ‘flakes’ to detach from the f. end of the GRS, and now also from its p. end.  Recently a strikingly dark grey collar also formed around the GRS, and extended p. it as a dark South Tropical Band (STropB). Since Report no.4, the latest activity has been as follows.

On May 13, a  large SEBs ring entered the Red Spot Hollow (RSH) on May 13.  As it orbited round the RSH, a flake began to separate from the GRS N edge on May 15, and on May 17 this emerged at the f. end as a large red methane-bright ‘blade’, as predicted.  It became very conspicuous on May 19-20 as its f. (west) part retrograded on the SEBs away from the GRS, while its leading end remained attached to the GRS and continued to orbit around it.  The leading end probably squeezed around the S edge of the GRS on May 20, and I believe it then became the large red blade that emerged from the p. end of the GRS on May 21-23 (as the previous one had done on May 6-7; see Report no.4).  The appearance on May 22 & 23 has been extraordinary!  Also, traces of disturbance may now be circulating completely around the perimeter of the GRS, so the erosion or splitting on its N side, which observers pointed out on May 22, could be due to one of the earlier disruptions.  An extra complication is the STB Spectre, whose p. end is passing the GRS although not clearly visible.

The attached two compilations show RGB images (unprojected) from May 12 to 22 (Figures 1&2).  Figure 1 shows representative images with an hypothesis as to how the vortex from the SEBs, or (more likely) a less organised remnant of it, drew the red material out of the GRS.  Figure 2 shows the subsequent distribution of the red material.

These original images have higher resolution than most posted maps. The methane images show the red flake at higher contrast though lower resolution; they are not included here as they are fully represented in Shinji Mizumoto’s maps.

The activity could extend beyond the vicinity of the GRS.  Andy Casely points out that as the big SEBs ring approached the GRS on May 10-11, it interacted with the material returning on the dark STropB, spinning up and enlarging. He suggests there might even be a feedback, with the ripples running south of the GRS triggered by the flakes, then occasionally being big enough to interact with retrograding SEBs rings.  Indeed, although the SEBs rings do not appear to survive passage around the RSH, plenty of turbulence streams around the S side of the GRS on that dark stream and into the STropB — very reminiscent of last year’s S. Tropical Disturbance passing the GRS.  It is conceivable that these interactions p. the GRS could generate a new S. Tropical Disturbance there soon, as happened in the Voyager 2 approach sequence.

On the other hand, since mid-May, the SEBs p. the GRS seems to have quietened down a lot.  There is one more retrograding ring there (about 30 deg p. the p. end of the GRS on May 22), but that’s all.  On the actual SEBs edge, there is now a beautiful long train of waves, such as we reported a few years ago.  So it is possible that the activity will die down for a while – but there are plenty more SEBs rings further upstream.

Although this activity is certainly new and increasing as compared with the last 5 years or so, perhaps we should be cautious about its long-term significance. Much of it would have been below the resolution of most historical observations.  As Andy C. says, these disruptions could be quite superficial, only drawing material out from the red upper cloud deck of the GRS while not affecting its underyling circulation.

Nevertheless, the obvious and exciting possibility is that this is the beginning of the end of the GRS.  Following its long-term shrinkage, for the last five years it has been only ~14 deg. long, so we are all wondering whether it is now so small that incoming vortices are able to tear it apart.   It would be wonderfully exciting if we were able to witness the disintegration of the GRS!  However, I suppose this is more likely to be a rather superficial phenomenon, and that the GRS itself will survive for decades longer.

Many thanks to Shinji Mizumoto, Clyde Foster, Andy Casely, Anthony Wesley, and Marco Vedovato, for their contributions to analysis and discussion, and to other observers for their hi-res images.

This report including mini-figures is available as a PDF here:   Report-no5_GRS-disruption-cont.pdf

The full-size figures are in a ZIP file here:   Report-no5_GRS_Figures.zip

Miniature copies of Figures 1-5 are below: 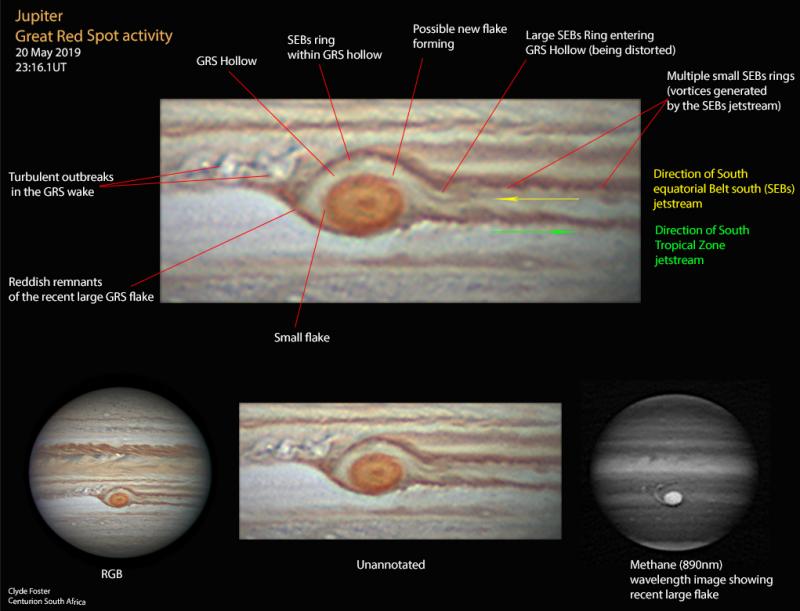 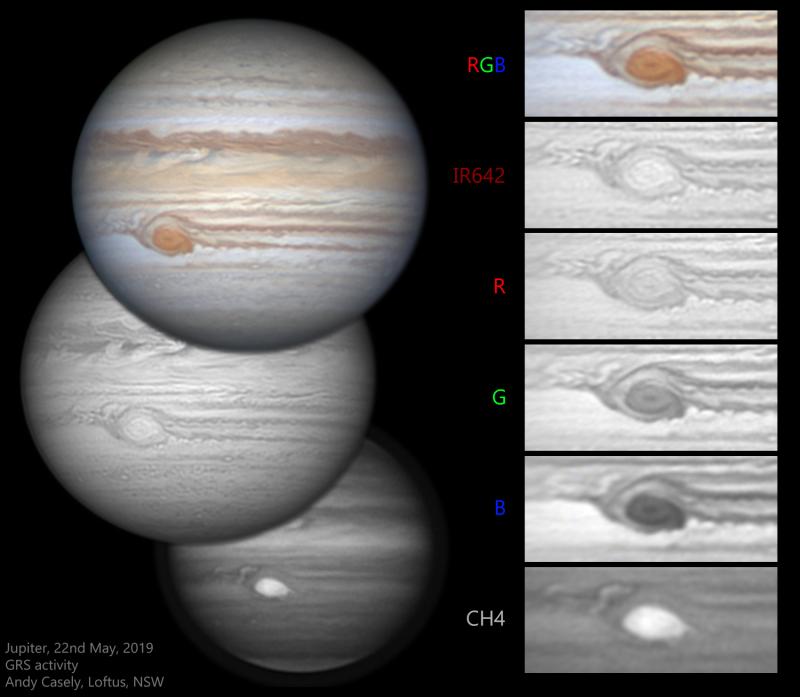 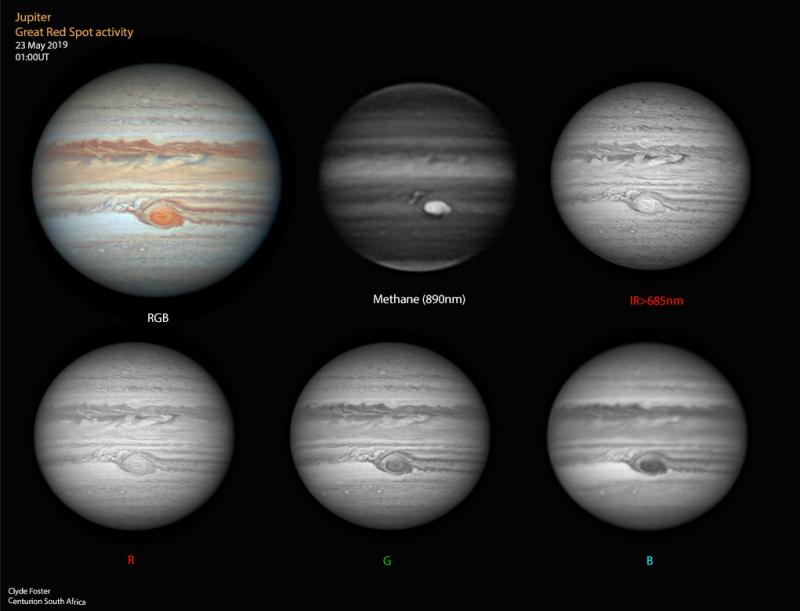