Jupiter’s opposition was on July 14, so this is a detailed report on Jupiter’s atmospheric features in the first half of the 2020 apparition, from February to June — with some additions up to July 25.

Part I is an extended summary (already posted in early July: posted as a PDF, and as plain text displayed below).

Part II is the main report, with a lot of details and illustrations; all the main features are covered in Parts I & III.

Part III reports the most surprising discovery of the year:  a series of waves in the EZ that move with System III longitude, not System I.

Another surprising discovery was ‘Clyde’s spot’, a bright plume outbreak in a South Temperate vortex, as described in Appendix 2.

Appendix 1 is a set of annotated JUPOS charts showing the detailed motions of atmospheric spots.  (As usual, these charts are oriented with longitudes increasing to the right, for alignment with maps with south up, and thus inverted relative to the illustrations in the main report, which all have north up.)

Supplementary Figures A & B (galleries of methane images) – included in the ZIP file above with main figures. 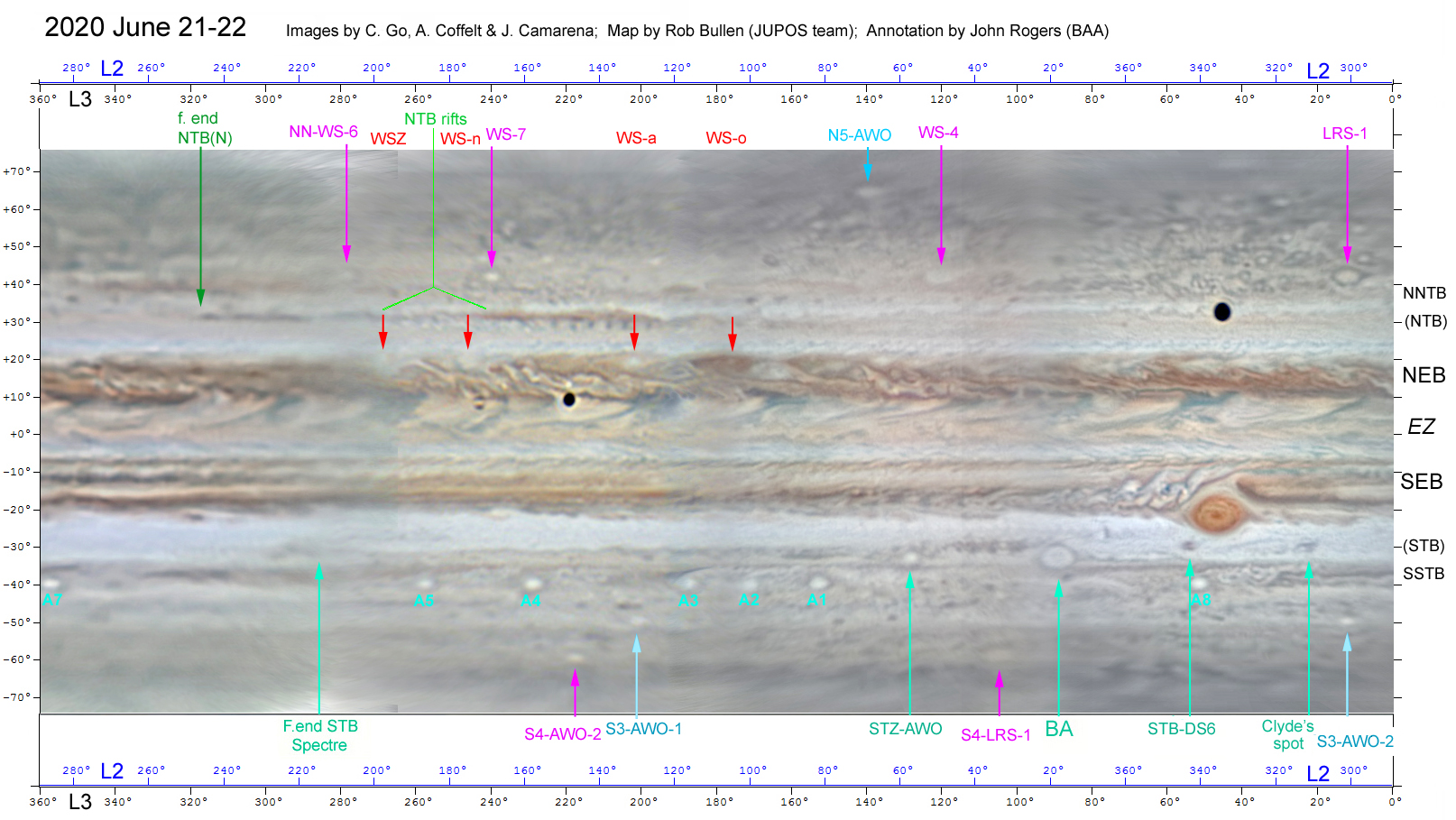 Below:  Anim-A.  Blink of two images 20 hours apart on May 12-13 (E.Sussenbach & C.Foster, animated by JHR).  This is the quiet side of Jupiter, though it includes WSZ and the f. end of the STB Spectre.

Below:  Anim-D.  Blinking of RGB images with CH4 images that have been rotated in Photoshop for approximate alignment. All images by Chris Go, aligned by JHR. Note that the dark red-brown strip in the NEB and the pale ochre strip in the EZ are methane-bright.  In RGB, arrows indicate  AWOs and cyclonic ‘ovals’ in the NEB.  In CH4, in the southern EZ, the dark blue arrow indicates a methane-bright spot fixed in L1, and cyan dots indicate the waves stationary in L3.

Four NNTZ ovals are tracked.  NN-LRS-1  was strongly red from Feb. to April but lost some of its colour during May.  NN-WS-4  had been quite reddish in 2019, but was white in Feb., then largely invisible thereafter due to low contrast with its surroundings.  JunoCam got a good view of it at PJ25 (Feb.17), and it can still be tracked in methane images  NN-WS-6  had apparently merged with a smaller AWO in 2019 Nov., but in 2020 there are two rather small, bright white AWOs near the extrapolated track, so it is not certain which is WS-6.  I have labelled them arbitrarily WS-6 & WS-7.

Several dark sectors of NNTB have faded away in the past year, though some can still be made out as pale oblongs.  The sector f. NN-LRS-1 is remarkable, with dark disturbance spanning the NNTZ and a large FFR (imaged by JunoCam at PJ26).

On the NNTBs jet, the outbreak of dark spots continues at all longitudes.

The rifted sector of NTB still exists, consisting of tiny white spots, now narrow with a long narrow dark NTB(N) along its N edge.  F. the rifted sector, there was a dark band in NTZ known as the N. Temperate Disturbance (NTD) up to mid-April, and a shorter version has reappeared in June.

The NEB is still impressively disturbed; it looks as though a NEB Expansion Event (NEE) is taking place.  As described in Report no.3, this started in mid-February when a bright spot at ~14ºN began to expand into a complex rift system. In late March, some sectors of NEB p. White Spot Z (WSZ) were inflated northward to 20ºN with this turbulence, and stabilised as expanded sectors of NEB while new ones were appearing further p.

Since April, the NEE has made some progress, but it is also fading in parts.  The big rifted region (which spans the full width of the belt) has come round to its original longitude again and  may be disrupting the expanded sector.  So we have to wait and see whether the expansion will indeed go to completion.

P. WSZ, there are several white ovals which appear to be fairly stable AWOs.  At least one (WS-a) has persisted since 2019, but others have appeared recently. As of mid-June there are three pairs of them, here designated as WSZ & WS-n; WS-a & WS-o;  & two new ones.  But WS-o has shrunk to a tiny spot, embedded in a large dark brown patch of expanded NEB.  Unusual large cyclonic white ovals have also developed along this sector. JunoCam imaged one at PJ25 (Feb.17; between WS-a and WS-o), and showed it to be a well-formed cyclone, rarely seen in the NEB.

Methane-dark waves:  In mid-May, a series of large diffuse methane-dark waves developed in the expanded sector of NEB.  There were five such waves, with a spacing of ~25-30º.  But they were short-lived, fading in mid-June as the rifted region began to disrupt this sector.

There is still an array of prominent NEBs dark formations all around the planet, with complex festoons and whitish areas in the northern EZ.  The dark formations are drifting at DL1 =  +5 to +8 deg/mth, as is typical.

The central EZ still has a pale ochre colour, and is also very methane-bright.  In some longitudes, the southern edge of the methane-bright strip has interesting undulations in latitude.  The southern strip is white but methane-dark.

The SEB is generally similar to last year, with minor variations.  Just f. the GRS, there is still a short sector of convective disturbance, which dwindles to almost nothing then revives.

The SEBs appears messy along much of its length and (since March) there are few SEBs rings or other features travelling with full jet speed. Instead, there are many dark streaks in northern STropZ with more modest retrograding speeds.

The GRS and flaking events:  The GRS remains small and dark red.  Its mean drift rate is unchanged at DL2 = +1.9 deg/mth.  Remarkably, it has been shrinking since Feb., even though no large flakes are being shed.  By mid-June it was only 12.3º long, the same as its minimum a year earlier. (Detailed data on the SEBs and GRS are largely from Shinji Mizumoto of the ALPO-Japan.)

In 2019, many SEBs rings entered the Red Spot Hollow and induced red, methane-bright flakes to split off the f. end of the GRS.  In 2020, with only a few SEBs rings entering the RSH, we have only recorded five flaking events from March to June inclusive, mostly minor with no large ones.

A dark  S. Tropical Band  has extended p. the GRS since June 1.

This domain is undergoing some interesting transitions as part of its long-term cycles of STB structured sectors, as described up to April in Report no.2 and in our PJ26 report. Since then:

F. oval BA, the dark STB Segment A continued to grow longer until it reached a maximum of ~25º around mid-May, when it also seemed to have more vigorous turbulence.  In June it was ~20º long.  F. Segment A, dark spots and streaks have extended west in an expanding ‘Sf. tail’ which by early June had reached the f. end of the STB Spectre, forming a dark band all along the STBs retrograding jet.

Oval BA suddenly accelerated when the STB Spectre arrived in Feb., and this very fast speed has been maintained (DL2 = -17.4 deg/mth).  BA is still white with a dark rim.  However, there have been no significant dark streaks on the STB(N) p. BA since March.

The f. end of the STB Spectre has not changed much since April. An adjacent dark mass is suspected of being an anticyclonic recirculation loop, and observed motions of tiny spots are consistent with this picture although recirculation has not been directly observed.

P. oval BA:  New cyclonic spots.  As noted in Report no.2, a new STB cyclonic structured sector is expected to arise p. oval BA, and there were two candidates in early 2020:  a very dark spot ~42º p. BA, and a pale oblique streak with a tiny white spot embedded in it, ~80º p. BA.

The first feature persists as a compact dark spot (which I’ve labelled ‘DS6’), which was imaged close-up at PJ26, and is now passing the GRS.

The main development has been the eruption of a methane-bright plume within the second feature.  This was discovered by Clyde Foster on May 31 and was known as ‘Clyde’s spot’, and by great good fortune, it was imaged close-up by JunoCam on June 2 at PJ27, showing that it was a methane-bright cloud with evidence of expansion, within a strong cyclonic vortex.  (A summary has been posted with our PJ26 report, and as a NASA press release.) The methane-bright plume was was short-lived, and was never conspicuous in visible light, but images still showed variable tiny spots at the same site, increasingly dominated by a dark spot which has grown more conspicuous until at the end of June it rivals DS6.