Here we post some maps of the planet around the time of Juno’s PJ28 (July 25), and some compilations of methane-band images which give updates on wave phenomena in the equatorial region and a flake from the GRS.

As a reference for other observations during late July, cylindrical map projections in System III have been produced by Rob Bullen, Shinji Mizumoto, and Andy Casely, from various observers images, in colour and near-IR and the methane band.  Seven of these maps are provided in the ZIP file.  The first is labelled and was also posted in Report no.4; another (covering PJ28 on July 25) is Figure 1 below.  We also have polar projection maps and System I maps, if needed.

1.  Stationary waves in the EZ(S) (continued from Part III of Report no.4)

These waves were still present, in the same L3 sector, in late July, during Juno’s PJ28 and concurrent professional observations.  Figure 2 is a compilation of images with the wave-crests marked, and Figure 3 is a pair of charts of their longitudes, in Systems I and III.  Clearly, the waves are near-stationary in L3 (or, even closer, L2).  In particular there was one near L3~220 throughout this period, and one near L3~200 for part of it.  There were other waves p. and f. with similar spacing but they changed more quickly.  In a few cases they may have ended by accelerating into System I but the images are unclear about such changes.

Similar wave-like features are sometimes seen near the GRS but are less regular (Figure 4).

Figure 4, esp. the first row with 3 images taken at almost the same time, shows that the visibility of these features varies according to the observer. This could in part be due to different methane filters; as the 889 nm absorption band is so deep and narrow, slightly broader filters can be noticeably less selective.  (T. Barry, A. Casely and C. Foster use a filter with 20 nm width from ZWO; C. Go and N. MacNeill, 18 nm width from Chroma; P. Miles occasionally uses a filter with 8 nm width.)  But there are some differences even between observers with the same filter, which might be due to resolution, processing, or unknown factors.

Figure 4 also shows the most substantial flake to have emerged from the GRS recently.  It was initiated by a retrograding SEBs ring that entered the RSH on July 19. The red, methane-bright flake began developing towards the f. end on July 22.  (Go’s images seem to show traces of smaller earlier ones as well.)  It split off on July 23 and was extending f. on the SEBs on July 25.  JunoCam also showed it then (as well as a sliver of an earlier flake on the p. side). Thereafter (not shown here), methane images did not show any persisting flake.  But it probably did travel round to the p. end, as on July 27-29, hi-res RGB images showed a brown bulge at the p. end of the GRS (Dauvergne, Foster, Carlish), which was detaching by August 1 (Barry, Wong) – probably material from the same flake.  But it was not methane-bright, and had less red colour on Aug.3-4 as it elongated northwards.

Several observers have recently drawn attention to a very methane-dark patch on the NEB (Figure 5).  It coincides with an intensely brown patch at L3 ~ 240, which may have a tiny AWO within it.  Several images show that the methane-dark patch is more conspicuous when near the limb, i.e. it shows more than the usual limb-darkening, consistent with it being a clearing in the upper hazes. There is also a dark brown, methane-dark barge on the f. edge of the dark patch. Some time between August 3 and 8, a brilliant white point erupted on the S edge of this barge. Outbreaks adjacent to barges have been observed before, and this one occurred as an elaborate rift system was moving through that region.

The methane-dark patch is similar to the earlier prominent brown patches around tiny AWOs at L3 = 176 in June (this was also very methane-dark) and L3 = 158 in July.  These are all features of the newly expanded NEB. 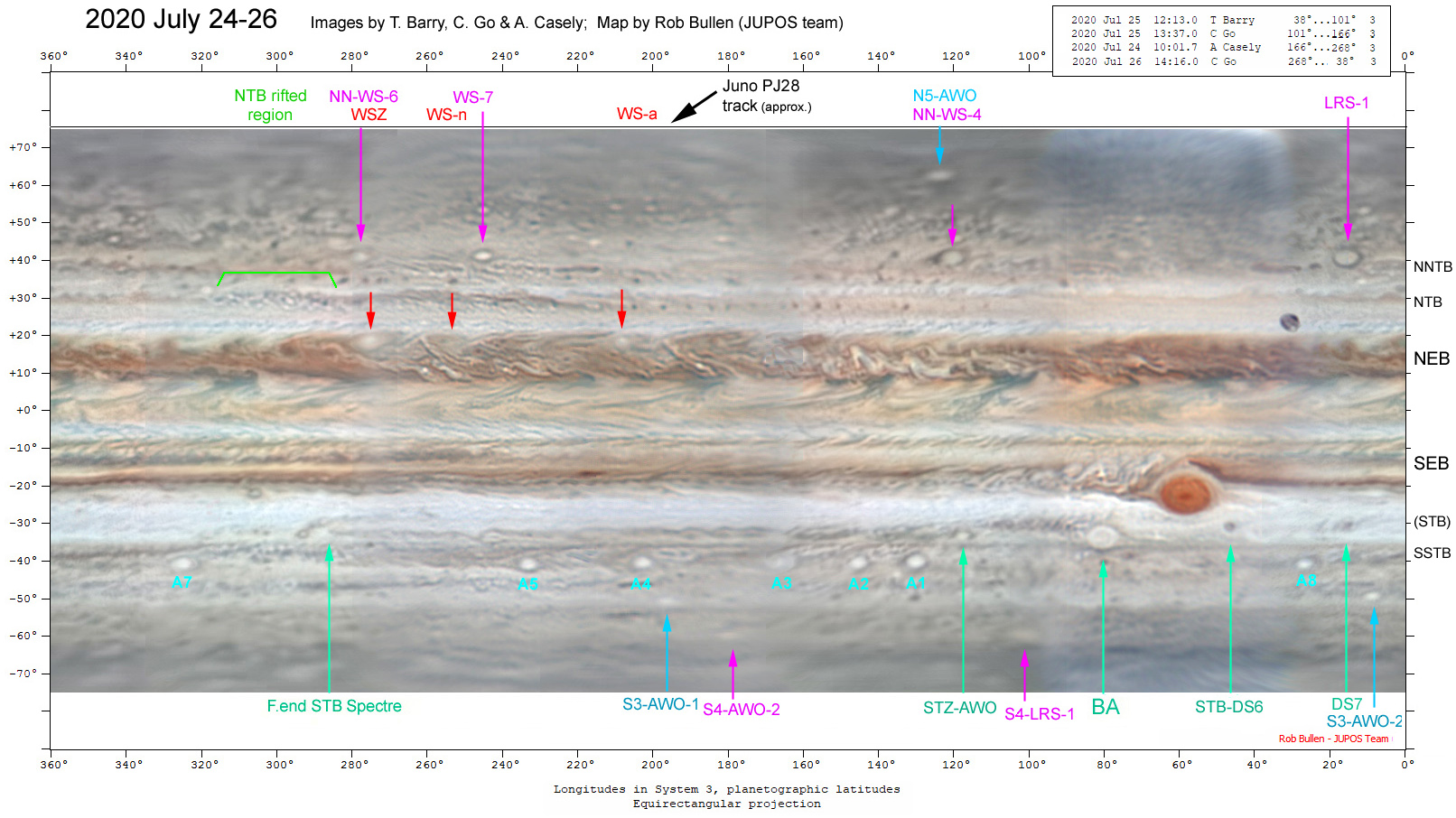