This completes our account of the atmospheric phenomena on Jupiter during the 2021/22 apparition.  The previous interim reports covered many regions and the most interesting phenomena [2021 Reports nos.5-9].  Here we fill in the gaps, and add speeds and latitudes for spots.

The Extended Summary covers all regions of the planet, including material in previous reports, to give a general overview of the apparition. The full report with new material comprises Appendix 1 (10 pages and 19 figures), along with a brief review of the speeds of the fastest jets for comparison with the present results (Appendix 2).   The list of observers is posted separately [Report no.11].

Overall, the planet was rather quiet; none of the belts underwent major upheavals, and the only circumglobal disturbance was the ongoing (and reintensified) ochre coloration of the EZ.  The NEB, though, drew much attention as it quietened, faded and narrowed to an extreme degree, leaving only a narrow dark brown NEB(S), and setting the scene for a future NEB Revival.  The other region of great interest was the South Temperate domain, where several cyclonic features evolved in ways that have led to a widespread restoration of the dark STB.  Streams of prograding spots continued on the STBn, SEBs and NNTBs jets.

The full report (Appendices) is in this PDF:Report_2021-22_no10_Full(Appendices)

Miniatures of the figures are in this PDF:  Report_2021-22_no10_Minifigures

The full-size figures are in this ZIP file:Report-2021-no-10_Figures

Figures 1 & 2 (maps of the planet) are shown below at reduced scale: 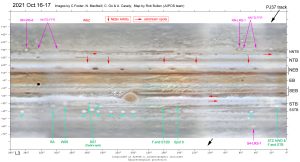 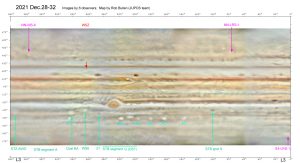