This report describes the behaviour of the high-latitude northern domains in 2021-22, in unprecedented detail.  We are very grateful to all the observers, to the JUPOS team, and to the JunoCam team.  To download the report and its illustrations, click on the links below the ‘Summary & Conclusions’.

Movements of spots in the N6, N5, N4 & N3 domains are analysed from amateur images and JunoCam images. The JUPOS team have been able to track more spots in these domains than ever before, including several in the N6 domain.

The drift rates and latitudes all lie close to the zonal wind profiles known from spacecraft, and confirm that in both the N5 and N4 domains the broad retrograde flow represents the bulk motion of the FFRs (folded filamentary regions) as well as AWOs (anticyclonic white ovals). All spots in N6 domain are rapidly prograding.

There were several notable interactions of AWOs. Two N5-AWOs (a & b) approached each other but then rebounded and exchanged their drifts and latitudes.  The largest N5-AWO (e) suddenly reversed its drift when it approached a smaller white spot further north.

Most remarkably, we have one or (very likely) two examples of AWOs crossing prograde jets.  N4-AWO-A swung rapidly southwards after it approached N4-AWO-B, and was last seen straddling the N4 jet and split into two lobes; the third time that this has been observed.  Likewise, a N3-AWO swung southwards and crossed the N3 jet into the NNTZ – the first time that a spot has been seen to cross a prograde jet other than the N4 jet.

Both in N5 and in N4, AWOs can last for months or even years – in spite of many sudden shifts of latitude and drift rate – just as in the N2, S3 & S4 domains. V-hi-res tracking is needed to resolve these shifts, which can occur within less than a week.  The largest N5-AWO (e) has probably lasted for years; some N4-AWOs may also have done (four of them lasted throughout this apparition) but cannot be identified from year to year because there were several of them with unpredictable track shifts.  On the other hand, small AWOs in N5 and N4 have more rapid turnover than in lower-latitude domains.  Within the timespan of our 2021 observations, some anticyclones in the N5 domain appeared and disappeared. Likewise, several in N4 probably lasted for only a few weeks or months.

Cyclonic features (FFRs or smaller cyclones) are evidently less stable than AWOs. Their JUPOS tracks are shorter, and may end because the features changed, or disappeared, or were unresolved after opposition. Many of the short-lived retrograding tracks that we measured from the JUPOS chart are probably FFRs in the body of the N5 and N4 domains, but most FFRs seen in JunoCam and Hubble maps are too ill-defined to be tracked in amateur images.   However, almost all those from the N5 chart that we could identify at PJ36 were cyclones either at the northern edge of N5 or fully within the N6 domain. These tended to be isolated bright compact cyclones, rather than extended FFRs.

Here are miniature copies of the figures:  Report_2021_N3-N6_Minifigs

Here are samples from the figures that show the quality of images used: 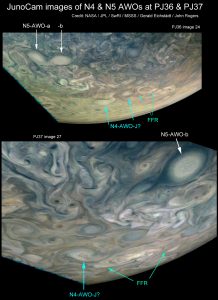