This is a brief update on Jupiter’s weather patterns as of mid-June, 2021, together with a recent map made just before Juno’s PJ34.  Thanks are due to the many observers, who are producing excellent coverage now.

There is still a very small but bright AWO (anticyclonic white oval) in the NTZ, which marks a boundary between different sectors of the NTB(N), although there is no longer any rifted region here.  Following the AWO, the NTB(N) is very dark grey with a prominent series of waves on its N edge. Preceding the AWO, there are several dark bars or ‘barges’ in the same latitude.  The NTB(S) is still reddish and featureless.

The most notable recent change is the strong fading of the NEB, leaving only a narrow, very dark brown NEB(S).  The AWOs and barges, which developed after last year’s NEB expansion event, are still present (now 8 of each), and the barges are becoming extremely dark and conspicuous.  There is no rift activity except for a few short-lived bright spots near the N and S edges.  All this resembles the situation in 2011, which led to the NEB Revival in 2012.  So it is possible that the fading will continue, leading to a NEB Revival which could be a vigorous and spectacular affair – although we cannot confidently predict what will happen, as no such event has occurred for over a century, except that of 2012 which mostly happened during solar conjunction.  Given the 3-year periodicity of such events and of recent NEB expansion events, it will probably be in 2023.

As the NEB rifting activity declined, most of the NEBs dark formations have become less conspicuous, and more ill-defined and elongated.  We should watch to see if they are replaced by smaller, very rapidly moving features, as happened in 2011-12.

The EZ still has strong orange or ochre coloration, mainly in a broad Equatorial Band (EB) but also more weakly over the EZ(N).  The EB is still very bright in methane-band images.

Last year we discovered a series of waves along the S edge of the EB in methane images, stationary in System 3 longitude.  This year, a few similar waves have also been recorded.  Most remarkably, since mid-May there has been a methane-bright formation spanning the whole EZ, mainly remaining near L3 ~240, with its S side being one of the quasi-stationary waves although its N side gradually stretched to lower longitudes as a methane-bright streak.  It is not clear whether it will persist beyond mid-June, but this region still deserves frequent imaging in the methane band.

The SEB is not much changed.  There is still some convective activity just f. the GRS, and there are now numerous dark rings retrograding on the SEBs jet towards the GRS.

The GRS and its surroundings have been highly disturbed throughout the apparition, as much as they were two years ago.  Although some red flakes have been reported, the main disturbance appears to be in a dark, turbulent ‘Hook’ on the f. edge of the GRS (similar to the Hook in 2019 or the STropD in 2018).  Dark material streams from it around the S side of the GRS and has formed a massive dark S.Tropical Band on its p. side, which extends about half way round the planet. All these features have been present ever since Feb.

The GRS is encircled by narrow streaks and is very small.  During the 2019 events, it transiently shrank to a length of ~12.4°, its smallest size ever.  Then it recovered, but it shrank again in spring, 2020, and has remained at an average length of ~12.4° for the past 12 months (figures from Shinji Mizumoto’s charts) – sometimes being even smaller.

These phenomena are being thoroughly documented by Shinji Mizumoto, with charts and maps posted on the ALPO-Japan web site:

Interesting changes are continuing in this region. JunoCam at PJ33 showed us what had happened to the two cyclonic dark spots p. oval BA during solar conjunction.  DS6 had turned into a white oval adjacent to oval BA, so we now call it WS6 (bright white in amateur images although largely orange in JunoCam images).  DS7 (“Clyde’s spot”) was revealed as a small FFR (turbulent cyclonic region) – and it seems to be growing, and emitting disturbance around it.  The area around it is darkened and disturbed, from BA down to a discontinuity which I’ve labelled “F-Spectre?” on the map.  This may be the cyclonic hemi-circulation that used to be the f. end of the STB Spectre, but we still need v-hi-res images to determine this.  It will be very interesting to keep an eye on this sector, to see whether a new dark STB segment will eventually develop from the sector as a whole, or from continuing expansion of Clyde’s spot.  (There is already a dark turbulent STB sector f. BA, ~45° long.)  This could all lead to a widespread revival of the STB, as last happened in 1993. 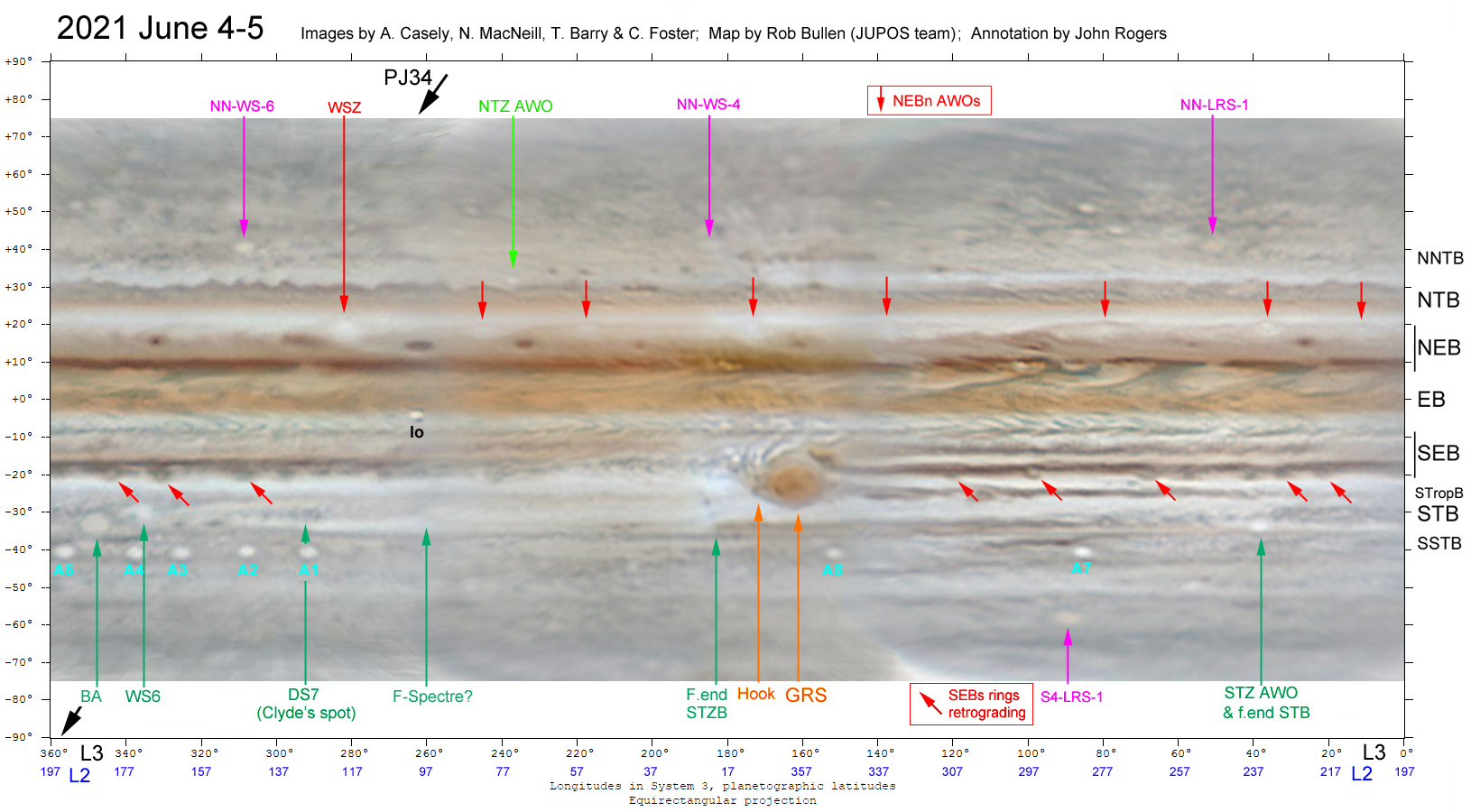