During the 2021 apparition, two impact flashes have been recorded on Jupiter by amateur observers; these were the 7th and 8th such fireballs since the first was observed in 2010.  Hi-res observations soon after each impact put tight limits on the persistence of any visible traces of these events.  The site of the second one was imaged just 28 hours later by JunoCam!

(For a summary of these impacts up to 2019, see Ricardo Hueso’s page at:  http://pvol2.ehu.eus/psws/jovian_impacts/science_background.html)

It was discovered and reported by Jose Luis Pereira in Brazil (an image made from his video is at the bottom of this page).  This detection was obtained with the DeTeCt software that Marc Delcroix has made available for this purpose.

Apart from the discovery by Jose Luis Pereira, it was also discovered or recorded by eight independent observers in Europe (France, Germany, Italy, Romania).  Two noticed it visually (at eyepiece or on screen) but without recordings; two others noticed it on their recordings and alerted other observers locally; four others found it in their recordings afterwards.

This could be the brightest such fireball observed so far (apart from the larger SL9 impacts in 1994), and the most prolonged.  While some observers recorded a duration of ~2 sec, which is typical, the most sensitive videos recorded it for ~3.6 sec according to Marc Delcroix. It was also recorded by more observers than any previous one.

An excellent RGB image of the area was obtained by Damian Peach and Enrico Enzmann just one hour after the impact, and did not show an impact scar. Nor did any subsequent images. Several European observers got methane-band images on the same rotation but again there was no obvious remnant.

(Tragically, Enzmann’s house and observatory on La Palma, Canary Is., were destroyed by the volcanic eruption just two weeks later.)

Full details of this impact flash, with all the images, are on Marc Delcroix’s web site:

The second event was on 2021 Oct.15, at 13:24 UT.  It was discovered and reported by Ko Arimatsu, from Kwasan Observatory, Kyoto University, Japan.  He is the leader of a professional team using a dual imaging system called PONCOTS on a Celestron C11 (280 mm Schmidt-Cassegrain). They obtain CH4 (889 nm) and visual (505-650 nm) images simultaneously with two CMOS cameras attached to the single C11 optical tube through dichroic mirrors.  PONCOTS is a specific survey for impact flashes on Jupiter, which just started in September this year. This was an offshoot of their OASES (Organized Autotelescopes for Serendipitous Event Survey) program, which monitors stars for occultations by trans-Neptunian objects, but was suspended in 2021 because of the Covid pandemic.

This was the first such flash detected by methane imaging, but it was also clearly visible in visible light; it lasted about 2 sec, which is typical.

It was also recorded by another telescope in Japan, 100 km away, and by Victor Ang in Singapore (see image attached).

Unfortunately most of the regular observers in the Far East and Australia were not able to observe at the time for various reasons.  Isao Miyazaki took RGB and methane images just 17-21 minutes after the impact but there was no detectable remnant.  A few rotations later, on Oct.16/17, Glenn Orton and colleagues were taking near-infrared images using NASA’s Infrared Telescope Facility using SpeX in support of Juno’s PJ37, but saw no signs of debris.

The images did not show any obvious traces of the impact, which is perhaps not surprising, but very useful to know as this was a rare and fortuitous opportunity to see such a fresh impact site close up.  The images are presented in our report on PJ37, on the “Results from Juno (2021)” page on this web site.

If you suspect you have an observation of these events, do not hesitate to contact Marc Delcroix and/or Ricardo Hueso, your video could prove to be of high scientific value!

And if you observe Jupiter or Saturn for pleasure, do not hesitate to use the DeTeCt software (even on archived videos!) and participate in the DeTeCt project which could allow you to retrieve an impact flash you would have missed while observing, or even if this is not the case just contribute to an exciting collaborative professional – amateur project to estimate the frequency of impacts on the giant planets! 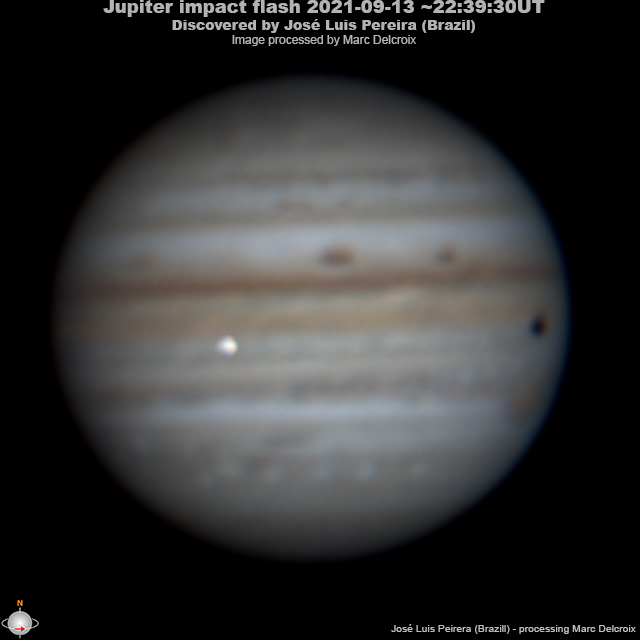 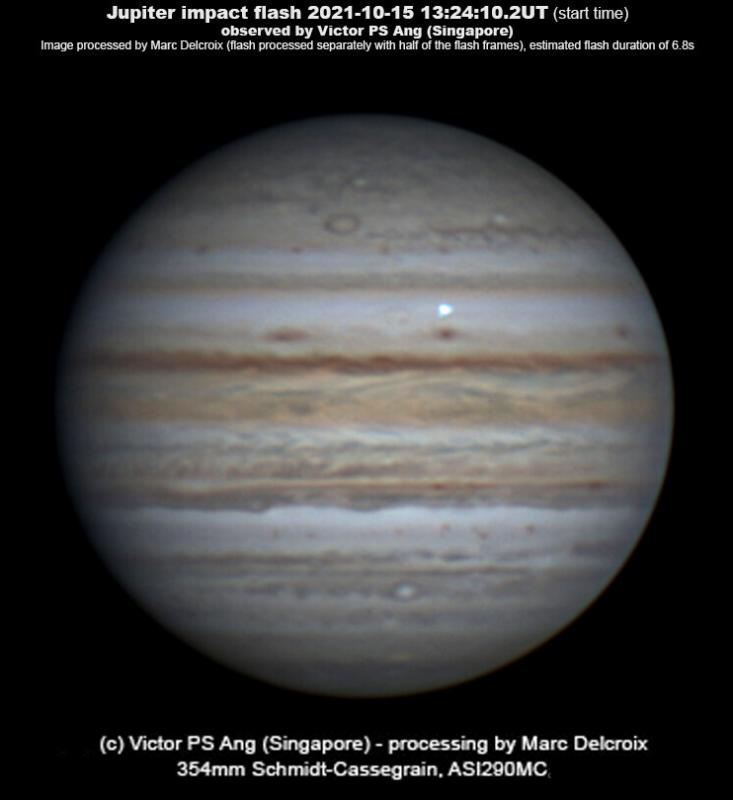