Here we give a brief overview of all the major domains on the planet in 2022-23, followed by an update on the NEB, GRS, and STB, continuing on from Reports nos. 3 & 4.  As always, we are very grateful to all the observers who contributed images, whether shown here or not.

The full-size figures are in this ZIP file:   Report-no-5_Figures

The overview of major domains is copied below (plain text followed by Figures 1 & 2).

Figure 1 gives an overview of the major changes in belts and zones during 2021 and 2022, and Figure 2 is a recent map of the whole planet.

The NNTBs (N2) jet has carried numerous dark spots (vortices) throughout the year, and this activity still continues.

The NTB continued to fade throughout 2022 until it has been reduced to a narrow faint featureless line at 25°N.

The NEB has been the most interesting region, as it started the year with the north and central parts very pale and quiescent; there were very dark brown ‘barges’ but early in 2022 they faded. Only the narrow brown NEB(S) was dark, and the usual NEBs dark formations (‘hot spots’) were replaced by small ‘super-fast’ features.  In autumn 2021, the only activity had been small bright white spots appearing occasionally in a slow-moving sector of the NEB(S).  In 2022 these convective plumes became more and more frequent and widespread, and they generated disturbance both to the south (where the usual features have reappeared most of the way round the NEBs) and to the north (where diffuse brown material wrapped around the faded barges).  The result is that the NEB has largely revived in width and darkness, but slowly and mostly quietly: unlike comparable revivals of the SEB and NTB, and NEB expansion events, this revival has not been driven by prominent convective ‘rifts’ in the main part of the belt.  In 2022 Aug. and Oct., a small bright ‘rift’ from NEB(S) extended into the mid-NEB, and in 2022 Dec., two bright outbreaks occurred within the mid-NEB for the first time in over a year (as described below), apparently confirming that the belt is returning to normal. Nevertheless, the barges are still faint.

The EZ had strong colour at the start of 2022 but it rapidly faded during spring and summer. Since Sep., only a faint dull yellowish tint remains across the zone, along with typical blue-grey festoons.

The SEB has not changed greatly for several years.  Since late Nov., the convective activity f. the GRS has been more extensive than in previous months.  The GRS shrank to its smallest ever size in June, and has only fluctuated slightly since then.

The S. Temperate domain is the other region where interesting changes are occurring, as described further below.  A number of structured sectors and local spots have evolved and converged to the extent that a dark STB now exists around more than half of the circumference, while a strong outbreak of dark spots continues on the STBn jet. 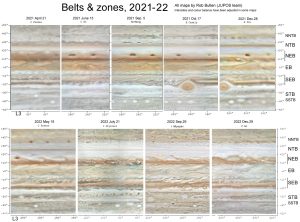 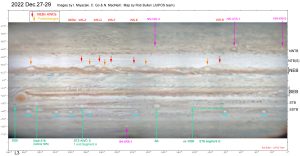