Perijove-40, on 2022 Feb.25, came just 8 days before geocentric solar conjunction, so these pictures provided the only view of the planet over this period. The views of lower latitudes showed quiescent sectors without major features, and did not reveal any major expansion of the NEB(S) disturbances. This report deals mainly with the detailed views of the polar regions,, which were valuable in combination with those from other recent perijoves, completing the longitude coverage and confirming interesting aspects. A visual highlight was the enormous elongated shadow of Ganymede coming onto the disk on the S. Tropical Zone.

Here is the text of the report:   Report-on-PJ40

Here is a PDF with small copies of the figures: Report-on-PJ40_Minifigs

Here is a ZIP file with the full-size figures: PJ40-report_Figures

Below are three figures adapted from the report: 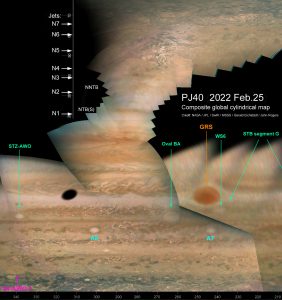 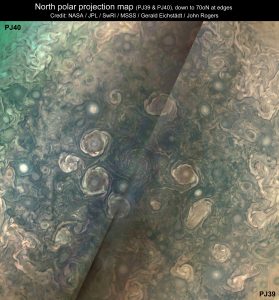