These images are put into context by our predictive map for Dec.11 at:  https://britastro.org/node/8411

and by an actual map for Dec.9-10 (Figure 1). On the latter map, I have approximately marked the sub-spacecraft track of Juno and the ‘footprints’ of the images. (The full map without overlay is posted on our ‘Jupiter in 2016-17’ web pages, along with a series of images of the relevant side of Jupiter from Dec.9-14.  Hopefully a hi-res map will also be assembled eventually from JunoCam’s inbound and outbound images.)  JunoCam covered almost all latitudes at this flyby.  [Footnote on latitudes:  Because Jupiter is flattened, not spherical, there are two alternative definitions of latitude. We always use planetographic (zenographic), but the Juno project has decided to use planetocentric. Both scales are given on the attached map.] 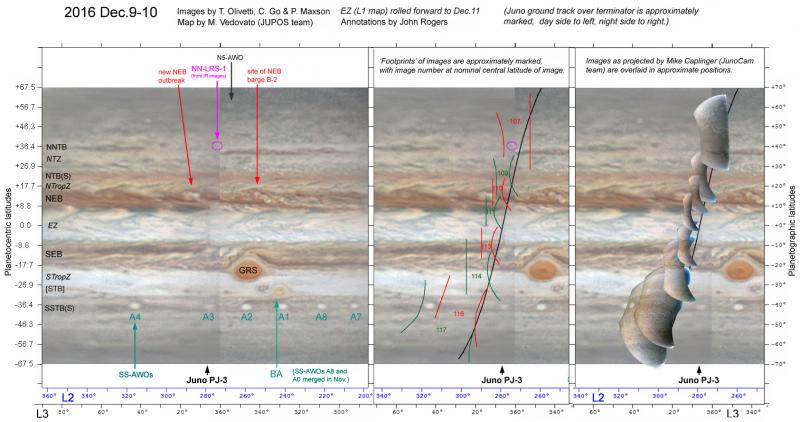 The JunoCam views are not like typical flyby images, as they are scans taken from low altitudes, effectively taking in a wide-angle view from the nadir to the horizon – and also distorted by the rapid motion of the spacecraft during the scan.  And they are taken shortly before local sunset. So there are strong gradients of illumination, darkening towards the terminator, and brightening with blue sky and haze towards the horizon.  There are also issues with artefactual colour bands, as noted in the previous post.  For high-latitude images I use versions of the original scans from which these bands have been cleanly removed by Gerald Eichstädt.  For low-latitude images I use the less distorted versions released as ‘map projections’ by the JunoCam team, which appear to be reprojected as views of the scene from higher than the true altitude; I have partially reduced the colour banding in these by ad-hoc blending in Photoshop.

The figures shown are reduced copies; full-size originals can be downloaded in a ZIP file via the link at the bottom of this item.

[Figure 2 = Image 107]  This stunning view of the high north temperate latitudes fortuitously shows NN-LRS-1, the third largest anticyclonic reddish oval on the planet, which we have tracked for the last 23 years.  It shows very little colour, just a pale brown smudge in the centre.  Consistent with this, it was invisible in all but the highest-resolution RGB images all last apparition and so far this apparition, i.e. it is the same colour as its surroundings.  But it always stands out nicely in methane-band images.  In fact, when the predictive map for PJ-3 was produced we had no record of it this apparition, but then it was identified in methane-band images and turned out to be precisely in the JunoCam image track.

Figure 3 shows NN-LRS-1 in three successive colour images, from the southern to the northern horizon, and a methane image, where it is bright.  (The latter image will enable the distribution of methane-bright cloud within it to be mapped for the first time.)

Also in these images, note a narrow diffuse band of white haze lying across the NNTB, whch seems to cast a short shadow in image 105, and a much longer shadow 12 minutes later in image 107.

[Report continues below these figures] 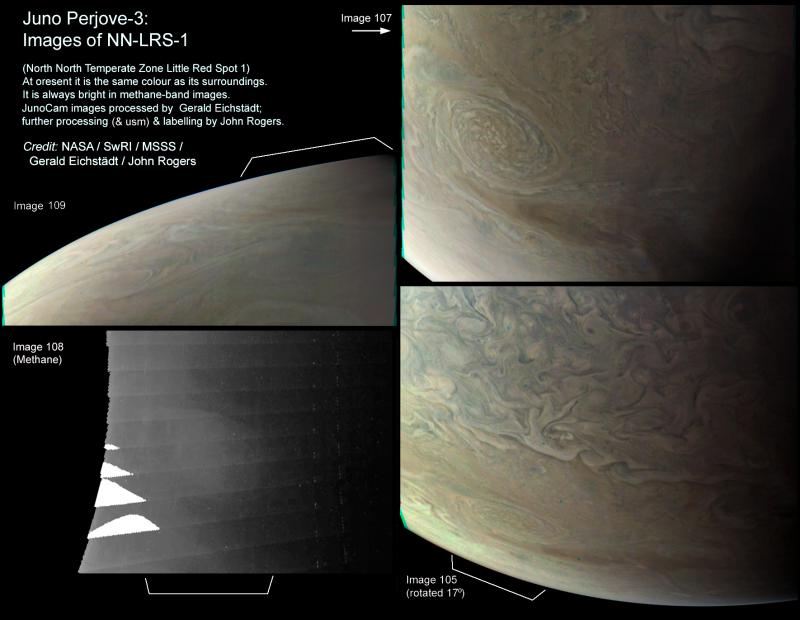 [Figure 4 = Images 109-111]  These 3 overlapping images show the intricate cloud textures and colours across the newly reviving NTB and the highly disturbed NEB.  Many colour closeups of these belts were of course obtained by Voyager and Galileo, but these images capture a unique transient stage in the great NTB jet outbreak which probably started in September and was discovered at Perijove-2 in October.

In the NTB (image 109), the main feature is the orange NTB(S) which developed in recent weeks as observed from Earth, plus turbulent streaks N and S of it.  Two tiny dark spots within the orange belt are notable (one also visible in image 110).

The N. Tropical Zone, in ground-based images, is currently filled with grey streaks and orange-yellow shading, an intense disturbance resulting from the NTBs outbreak. In the Juno images all this is nicely resolved, including one of the dark grey streaks which appears like a multicoloured caterpillar. A conspicuous loop at right looks like an anticyclonic (clockwise) circulation, but is not so distinctive in ground-based images just before and after. I suspect that a NEBn projection has connected to a passing NTropZ streak to produce a transient circulation here, but it could develop further.

JunoCam targeted the northern NEB because people had voted for a spot which was actually barge B-2 from last apparition; but B-2 was not in the field of view and was also obscured by a bright ‘rift’.  However, the day before perijove-3, a new white spot was discovered much closer to JunoCam’s target field (Chris Go on Dec.10; he showed its origin as a small spot on Dec.5). This very bright outbreak developed rapidly (Figure 5); exceptionally, it was in the northern NEB and so extended mainly to the west.  JunoCam just caught it on the horizon at the edge of image 111 (see inset in Fig.4).  It could develop further so ground-based observers will follow it closely.

Image 111 was taken at closest approach from an altitude of only 4147 km, so in the central region is the highest-resolution image ever taken of Jupiter. According to the map (Fig.1), a NEBs dark formation (infrared ‘hot spot’) is shown, which appears as a swathe of grey streaks. On its south edge there are two wave-trains in the clouds (see inset in Fig.4), similar to wave-trains of ~200 km wavelength which have been imaged by previous spacecraft.

[Footnote:  Although this inset also shows widespread narrower vertical striations, probably due to the strong gradient and enhancement applied, the wave-trains are real as they are localised in latitude and also visible on Gerald’s original. This image is of much better quality than the perijove-1 test view from 4149 km. ] 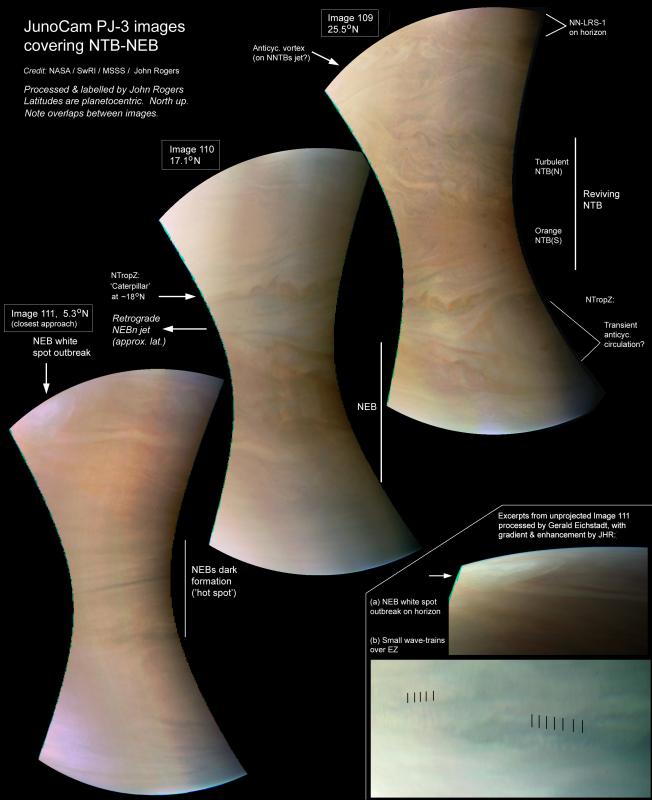 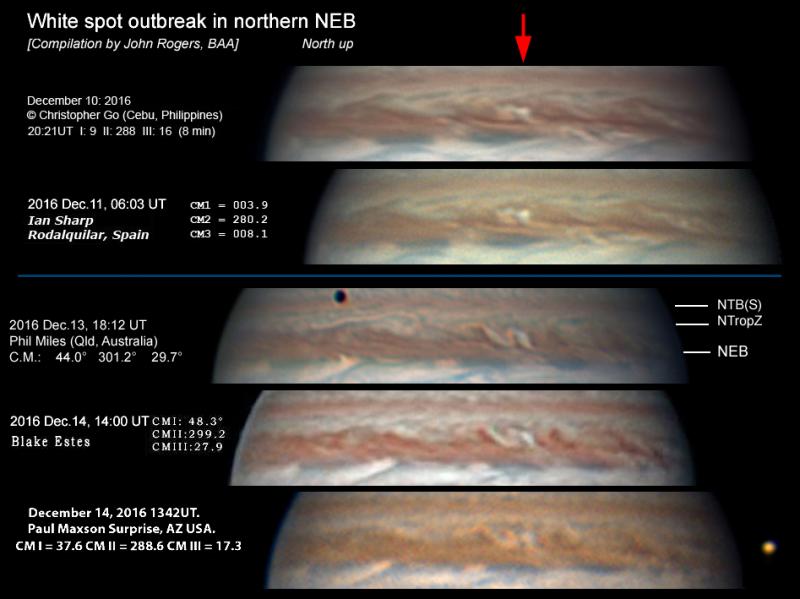