This is the first of a series of posts pointing out features of interest in Juno’s images taken at perijove-3 on 2016 Dec.11. The originals have been released on the JunoCam Image Processing web page.  There are 21 colour images, 12 methane-band images, and 5 long-exposure red-light images of the poles.

These images, especially the closeup ones, are clearly better than the test shots at PJ-1.  This is partly due to improved exposures, and partly due to better illumination. (The camera was viewing with higher sun angles this time, both because of the planet’s orbital motion, and because the spin axis was oriented to Earth rather than to the horizontal.)  The images as posted still have artefactual colour bands parallel to the terminator, but Gerald Eichstädt has shown how these arose from the compression/re-expanding procedure used, and has devised an algorithm that completely removes the bands.  Mike Caplinger in the JunoCam team has also developed a technique for the same purpose.

In the images to be posted here, I have sometimes started from versions processed by Gerald Eichstädt, and sometimes from the originals.  I then applied gradients and further adjustments to improve the visibility of features.

Images on screen are small copies; full-size images can be downloaded as a ZIP file (from link at the end of this item)

Images of the north and south poles confirm and extend the discoveries made by JunoCam at PJ-1: clusters of circumpolar cyclones (CPCs), ubiquitous folded filamentary regions (FFRs), and high-altitude haze streaks.

(Image 126)  This image was taken directly above the south pole, which is in sunlight.  It beautifully confirms and extends the discoveries made by JunoCam at PJ-1, most notably the cluster of circumpolar cyclones (CPCs).  Five CPCs are visible, 4 surrounding a fifth which is distinguished by being largely dark, and the latter may well overlap the south pole (whose position is approximate).  Similarly at PJ-1 there were 3 or 4 CPCs visible surrounding a darker fifth, with the S.Pole estimated to be on the edge of this dark central CPC.

The rest of the south polar region is, again, largely filled with turbulent cyclonic folded filamentary regions (FFRs), plus a scattering of small white ovals which are probably all anticyclonic. A loose ring of them again suggests the presence of a retrograde jet at ~72 deg.S.

Also marked are some anticyclonic white ovals (AWOs) which we have tracked from Earth.  S4-AWO-1 is also known as the South Polar Little Red Spot.

Many short diffuse white streaks can be seen which are relatively bright up to the terminator, although they do not project significantly beyond it, so they are presumably streaks of haze just slightly above the main clouds. Some seem to coincide with bright cloud lanes in FFRs, while others do not.

At right is a methane-band image for comparison.  Bright areas are high-altitude haze, notably the extensive South Polar Hood, and AWOs, and small bright lanes in FFRs.

The second figure show two images taken directly over the south pole, from PJ-1 and PJ-3. 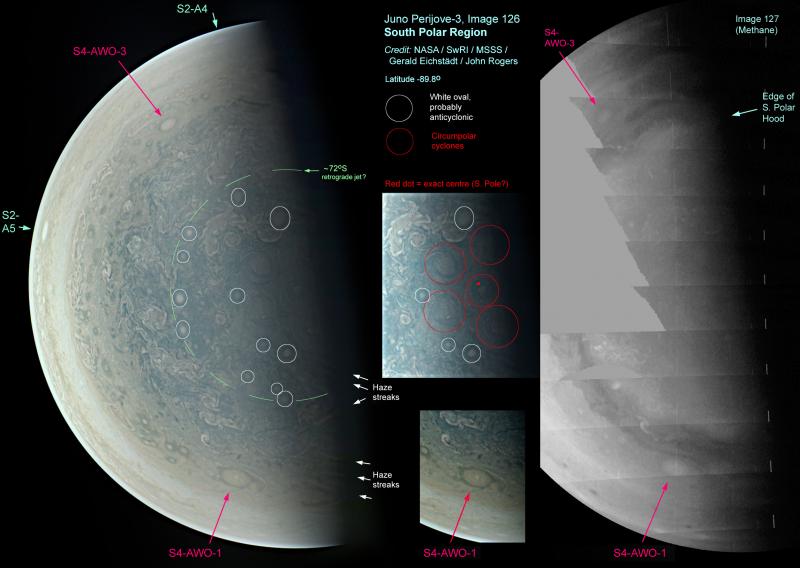 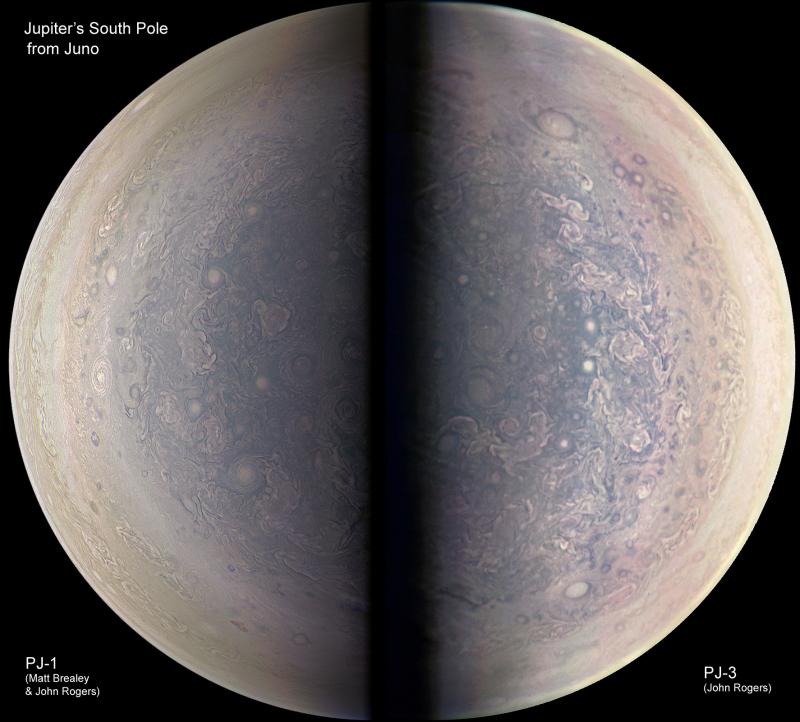 (Images 094-098)  JunoCam took a series of images of the north polar region, some with long exposures to search for lightning or aurora on the dark side.  Here we see a possible lightning flash on one image, and a possible auroral streak on all 3 images. (However the JunoCam team warn that they still need to exclude cosmic ray hits and scattered light.)

Around the pole itself, one can see a cluster of three circumpolar cyclones (CPCs), as at PJ-1. The pole itself is in darkness so we cannot see if the cluster has a central CPC as at the south pole.

(Image 099 & 100) This is the image taken directly above the north pole – plus a methane-band image for comparison.

(Images 092 & 104)  These two images show the north polar region from opposite sides as Juno flew over the pole.  They confirm features shown at PJ-1, including bright streaks of high-altitude haze near the terminator, and ubiquitous cyclonic folded filamentary regions (FFRs), interrupted by a bland zone at ~64-68 deg.N (planetographic latitudes; i.e., approximately bounded by the N6 and N7 prograde jets), within which is a narrow dark line.

This dark line in the bland zone is not continuous and not fixed in latitude, and it appears brown; in the methane image (separate post) it is dark. It is adjacent to some of the high-altitude haze streaks, which are methane-bright. Haze streaks at other latitudes also seem to have ‘shadows’, but I suspect all these features may actually be bands of thinner and thicker haze, perhaps due to vertical waves in the upper atmosphere (as we sometimes see on Earth).  The brown colour may be due to contrast with the surrounding haze which is actually bluish, and/or to viewing deep brown clouds through the gap in the haze.

Several AWOs are marked at lower latitudes.  Whereas most AWOs are methane-bright (e.g. those in the S4 domain), one AWO in the N5 domain is only weakly so and another is not methane-bright at all. 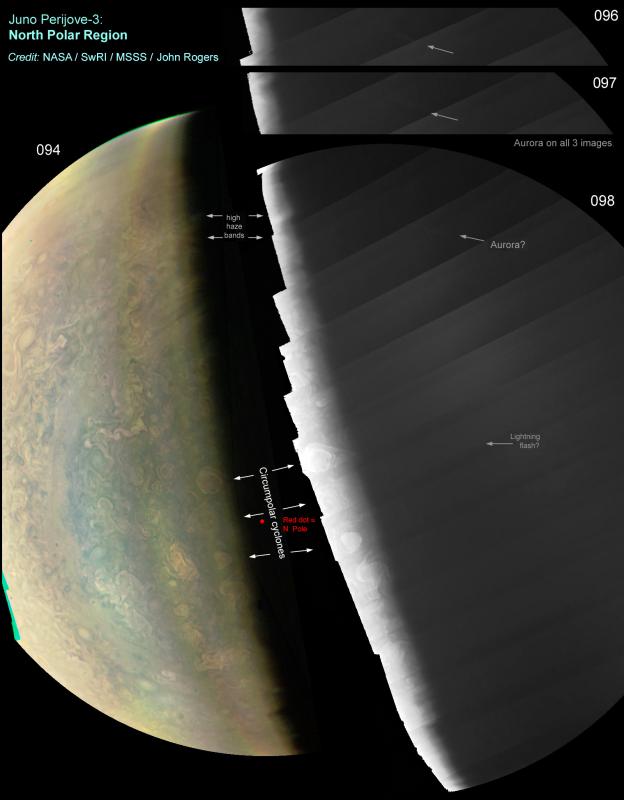 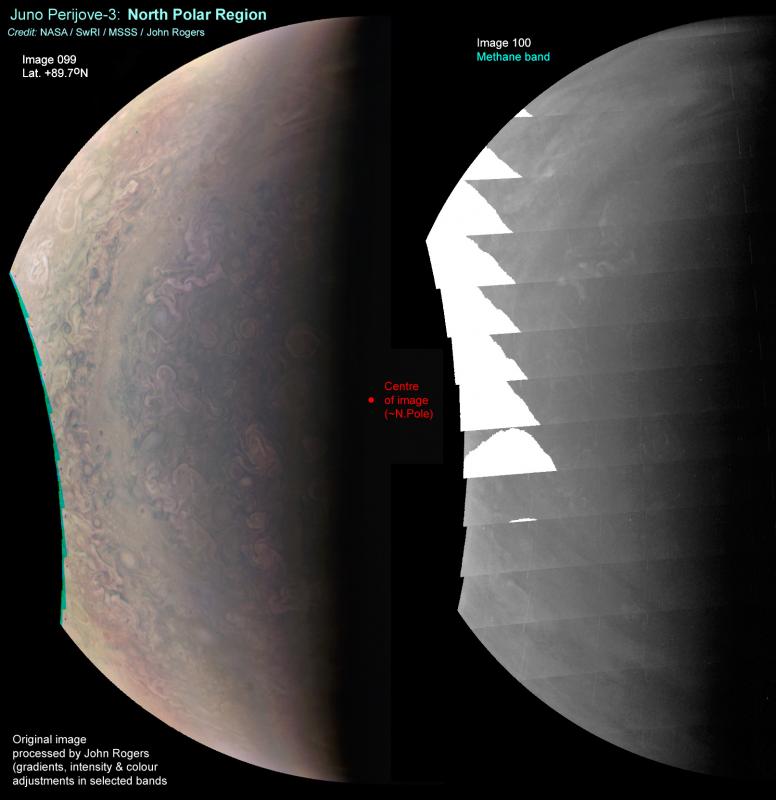 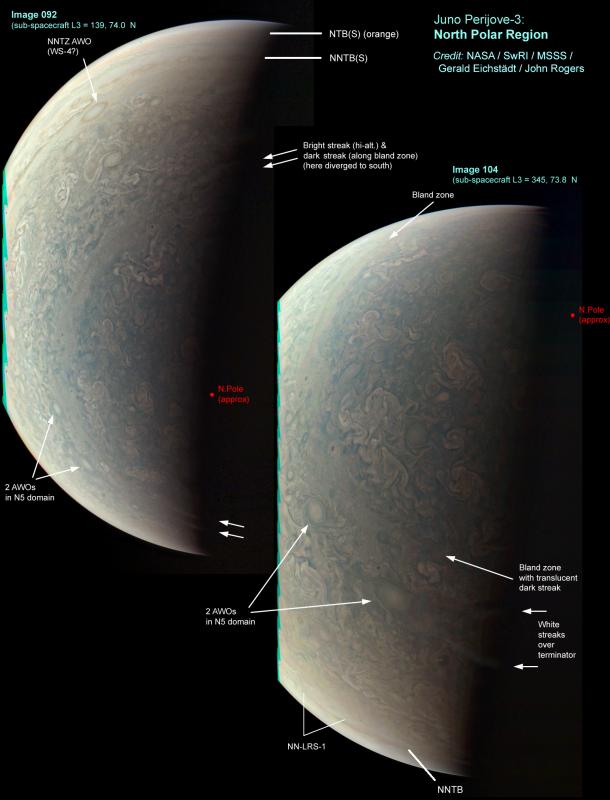