Juno had another successful pass over Jupiter at its fifth perijove on 2017 March 27.

JunoCam took another fine set of images, which are presented here with annotations.

As this was close to Jupiter’s opposition, there were many high-quality amateur images and maps to provide context for the JunoCam images, and these are included in Figures 1 and 2 of the report. These can be compared with the predictive map on this web site under ‘Jupiter in 2016-17 / Report no.7: Preview of Juno’s perijove-5’.

This time, the majority of images were reserved for the polar regions, so that time-lapse animations of the circulations there are being produced by the JunoCam team. The images confirm many new features that were observed at previous perijoves. Gerald Eichstädt is now producing true maps from all the images, in both polar and cylindrical projections, so this report includes accurate  latitudes for features of interest.  A table of the mean latitudes of jets is included.

As usual, features recognisable from ground-based tracking are annotated.  These include white ovals at extremely high latitudes: one at ~72ºS which has now been tracked for over a year, and a pair at ~60ºN which are now interacting.  [An extra figure has been added below, showing these ovals on ground-based polar maps from April 9-10.]

Five images were close-ups of the lower latitudes, as selected by the public, and fortunately they included our recommendations of the NTB (‘Big Red Stripe’) and the STB Spectre, both of which were nicely imaged.

Below are small copies of Figure 2 (context maps) and Figure 6 (the closest image ever taken), both with concurrent amateur images or maps for comparison, and Figure 7 (the STB Spectre).

The report is presented as a PDF with miniature copies of the figures.  Full-size versions of all the figures are in a ZIP file (links below). 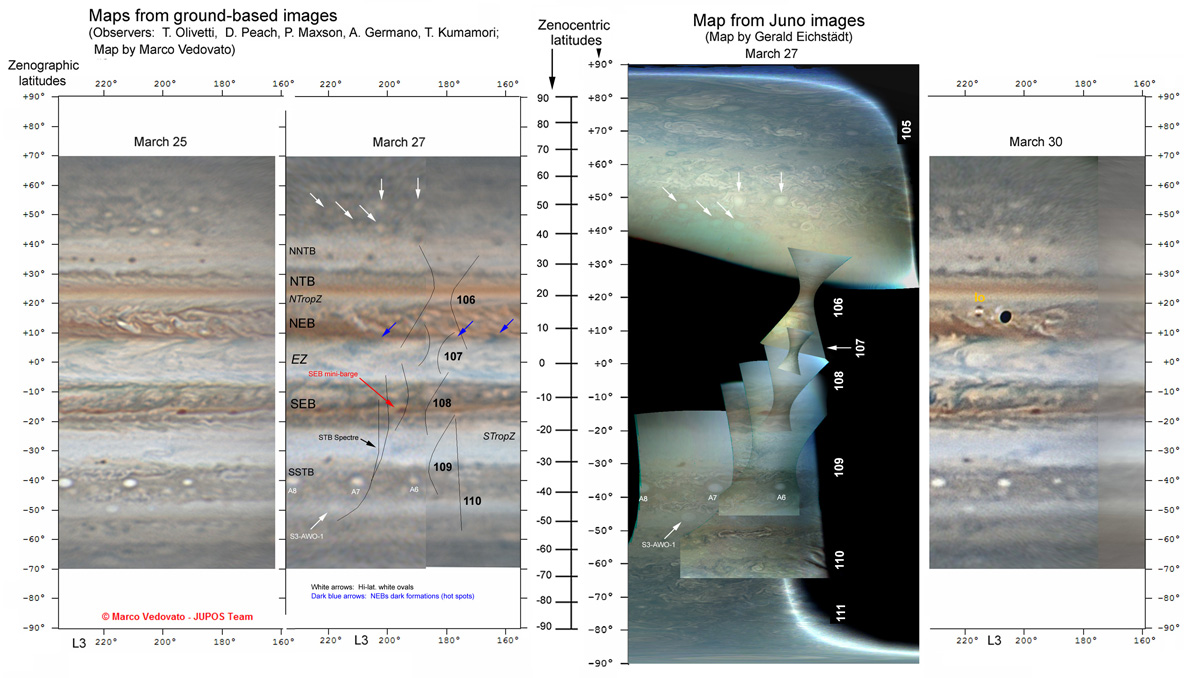 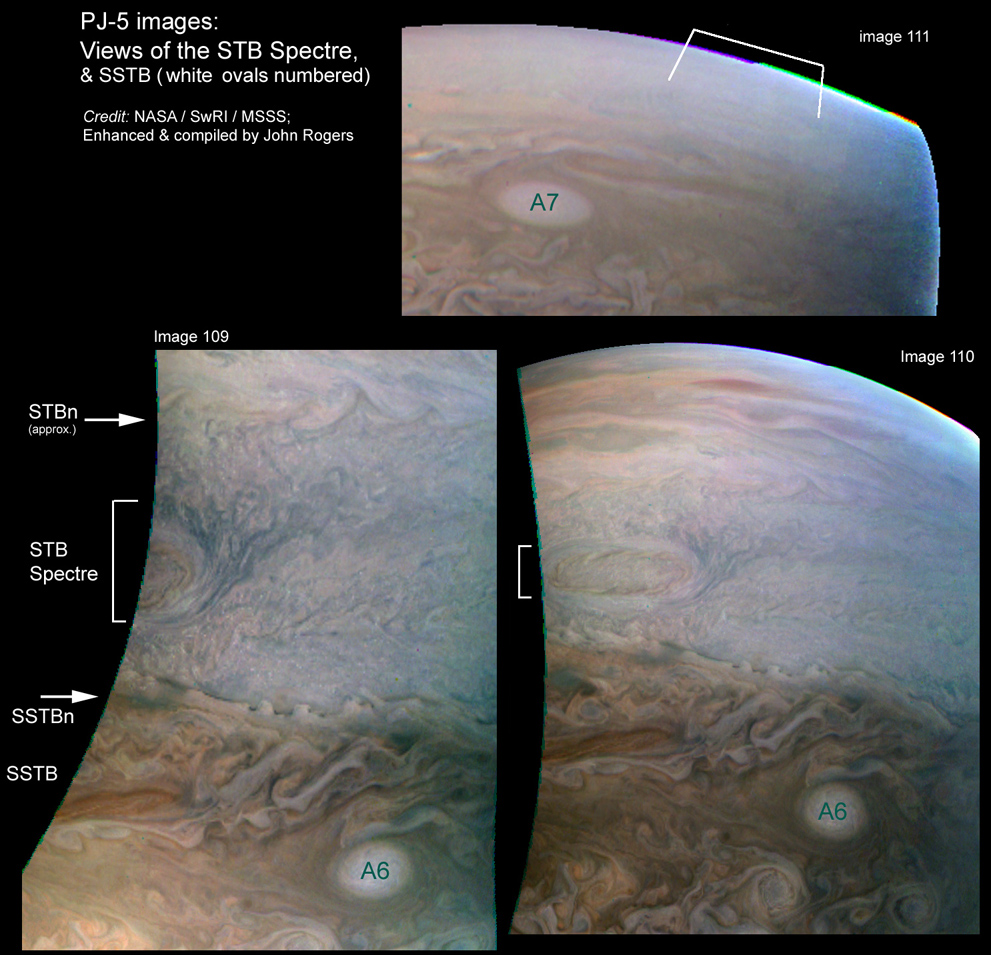 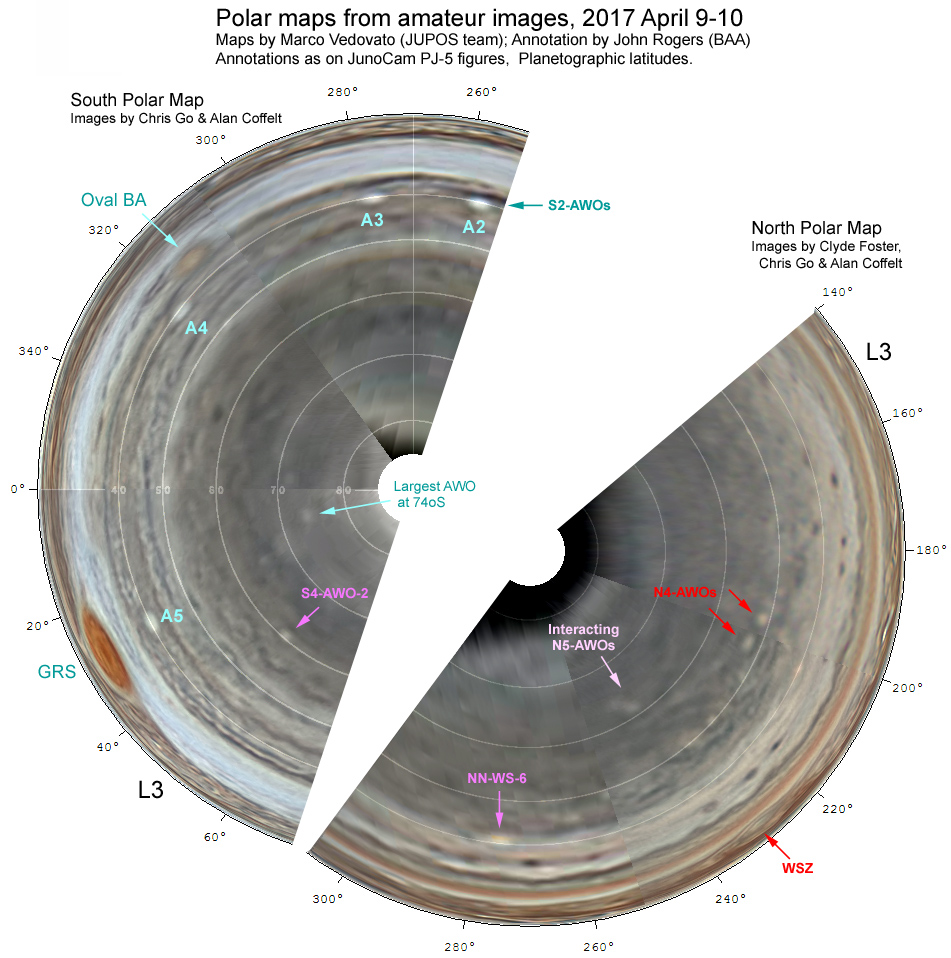