The JunoCam team have posted the images from Perijove-7 (PJ7), including the much-anticipated closeups of the Great Red Spot.  The images also captured two other notable anticyclonic ovals (NN-LRS-1 and WS-b), just as we had anticipated (https://www.britastro.org/node/10610), as well a vigorous rift in the NEB and (at last) a dark formation  (‘hot spot’) on the NEBs.  They also included fine views of the recently revived NTB and the recently expanded NEB, for comparison with the views from previous perijoves.

Figure 1 shows the best two ground-based images taken shortly before and after the flyby, along with a composite prepared to show the configuration during the flyby.  Figure 2 is a compilation of the Junocam images from the northern hemisphere, using the projected versions from the JunoCam web site, which do not have full resolution.

Full-res versions have been prepared, as usual, by Gerald Eichstädt, and can be obtained from the JunoCam web site: on the ‘Image Processing’ page (https://www.missionjuno.swri.edu/junocam/processing), select ‘Submitted by > Maquet-80’ to see only his products.

NN-LRS-1, a long-lived oval in the NNTZ, is shown in Figure 3, in parts of two full-res images.  The oval is filled with highly contrasted clouds surging around it: strongly sheared white clouds in the outer part, and  more puffy, pale brown clouds in its inner part.  The pattern suggests that the most rapid winds are around the edge of the inner (‘reddish’) part, just as in oval BA.  This oval was also imaged at PJ3, and it looks very similar now, except that the PJ7 images have much better quality and resolution.

Small bright shadow-casting clouds are seen in many places, as at PJ6.  Bright white ones are prominent in WS-b, and the SEB due south of the GRS, and the STB-STZ.  Some are also present in the orange NTB(S) and in the GRS, but they appear orange, presumably because they lie below the orange haze in these formations.

Figures 4 & 5 are the images taken almost directly above the north and south poles (at 87.9ºN & S, as the orbit is gradually tilting).  Known features are labelled as usual. The images again the features that we have described at previous perijoves and will be vital for tracking their long-term behaviour.

Miniature versions of these figures are shown below, and the full-size versions can be downloaded here. 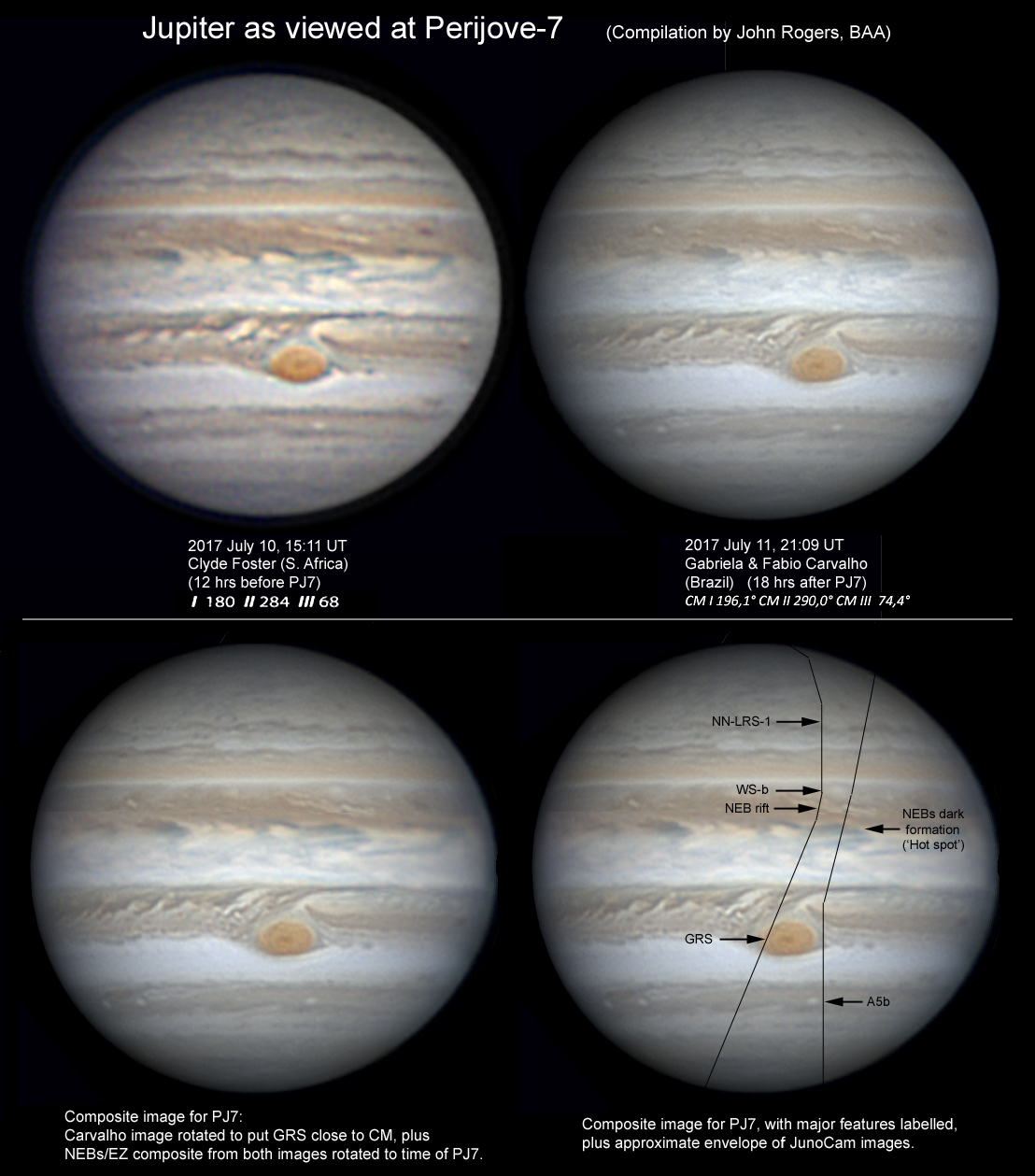 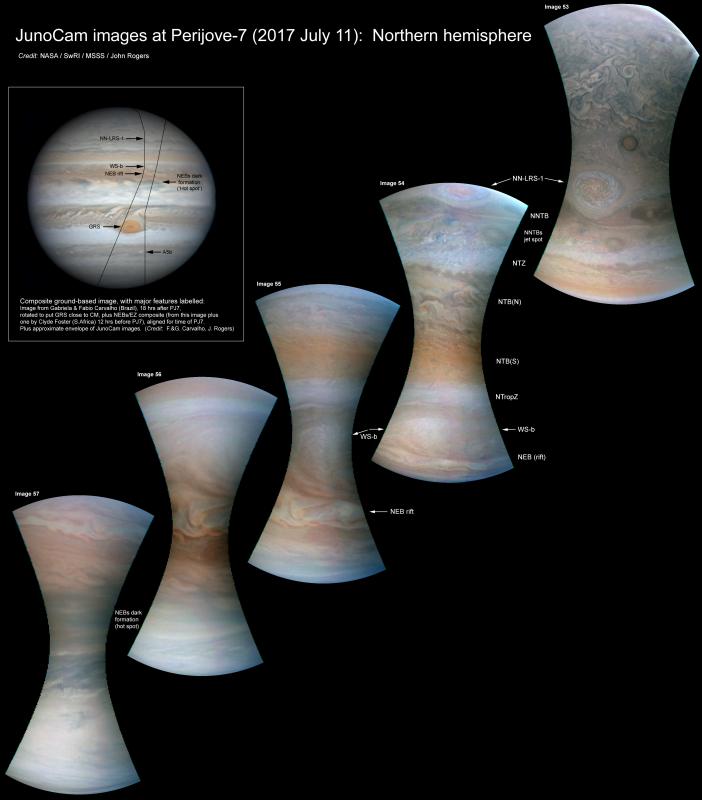 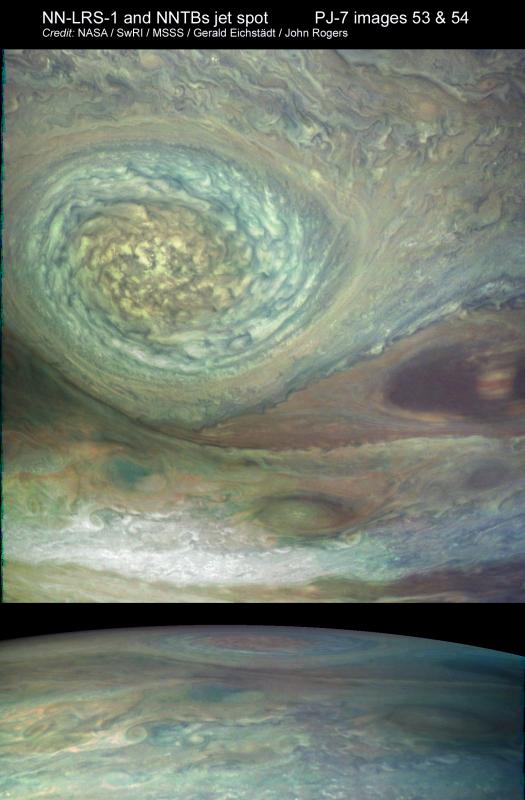 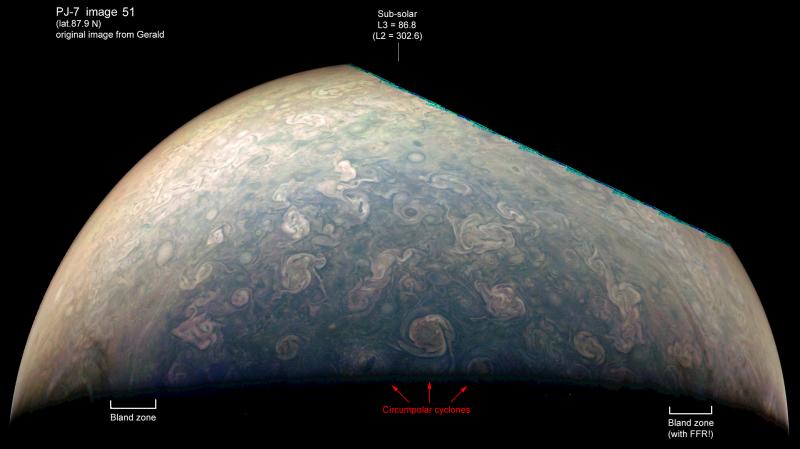 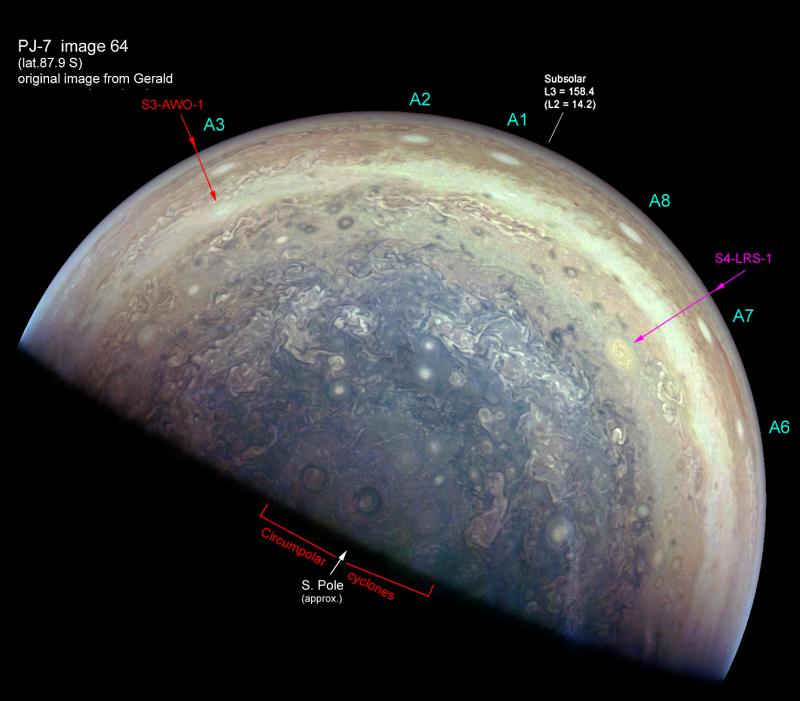