JunoCam at perijove-1: a global survey of Jupiter

Before and after its first perijove on Aug.27, Juno’s camera was taking frequent shots of the whole planet, nicknamed ‘marble movies’.  Within a day or so either side of perijove, the planet was close enough to show many details, covering the northern hemisphere for a whole rotation in the day before perijove, and the southern hemisphere for a whole rotation in the day after. The resolution was comparable to the best ground-based images (better at high latitudes), and much better than ground-based images at that time.  Gerald Eichstädt has kindly provided processed versions of all the raw images. In the attached compilations, I have further enhanced a selection of them, and identified the features which we were following in amateur images, so that we can give an update on the development of these atmospheric features.

When maps are made of these images, it will also be possible to improve our tracking of these features; and if similar maps can be made at perijoves 2 and 3, when the planet will still be very difficult to observe from Earth, they will enable firm predictions for the nature and location of features when Juno’s regular mission starts in November.

Here follows a summary of the features that are labelled in these two image sets. The most unexpected is at the end: two long-lived white ovals appear likely to merge.

(More background on these features can be found in our reports on the BAA Jupiter Section web site:  https://www.britastro.org/node/6809

–and particularly Report no.9.)

Here there have been no substantial changes over the past half-year.

There are still many little round spots (vortices) on the prograding NNTBs jet. They may be induced by a large turbulent sector (‘FFR’) in the NNTB.

There is also still a large turbulent (‘rifted’) sector in the NTB, which gives rise to a darkened sector of the zone following [west of] it, the North Temperate Disturbance (NTD).  Both these sectors are now of considerable length.

The principal spots along the NEB north edge are also unchanged: four small ‘barges’ (labelled B-1 to B-4 on the image set), and the very bright oval, White Spot Z.

In the SEB following the GRS, there are now large bright ‘rifts’, confirming the view from Phil Miles’ ground-based infrared images at the time.  I.e. the convective activity there has returned to normal, and the SEB will not fade in the next few months.

Oval BA (strongly reddish) is approaching the GRS. The small dark patch following it seems, at last, to have rounded up to form a quiescent small dark brown barge.

There is an unusually dense outbreak of small dark spots on the prograding SSTBn jet, between a large turbulent sector in the SSTB (‘FFR’; this may be inducing them), and the cyclonic ‘STB Ghost’, where we have observed such spots to recirculate into the STZ (this region was imaged by JunoCam at perijove).

The most notable changes are affecting the S.S. Temperate anticyclonic white ovals (S2-AWOs).  Two small ones appear to be merging in these images; such small-scale events are not uncommon and we observed one earlier this year.  However, the nine numbered AWOs are very stable, and yet two of those – A0 and A8 – have rapidly converged to only 9º apart and therefore are likely to merge in the coming weeks or months.  They have always been smaller than most, while their neighbour, A1, has become the largest.  Indeed it is possible that an A0-A8 merged oval could then merge with A1 in turn. In October they will start passing oval BA (which will itself be passing the GRS in November), and this passage may trigger a merger if it has not happened before.  Merger(s) will no doubt perturb the relative drifts of the AWOs; they will also be disturbed by expansion of the white oblong that developed in August between A3 and A4 (as also seen in Phil Miles’ images).  Therefore, predicting the positions of these AWOs will be less reliable than usual – but all of them will be of interest. 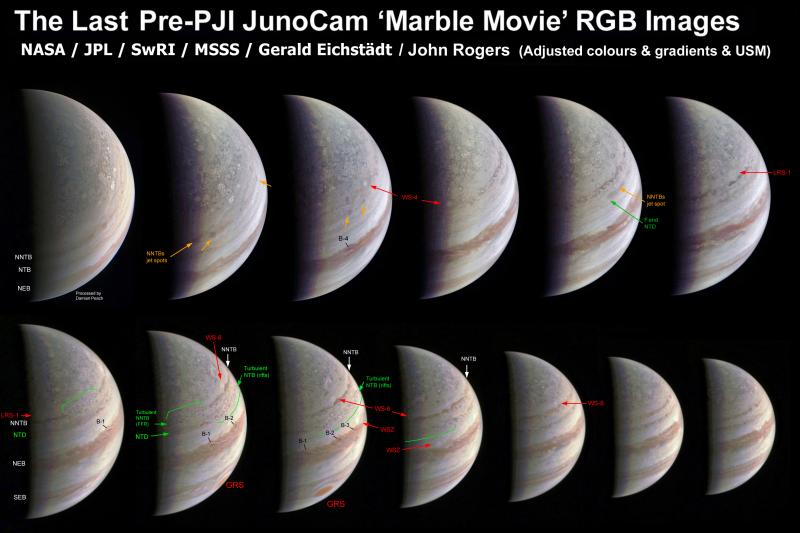 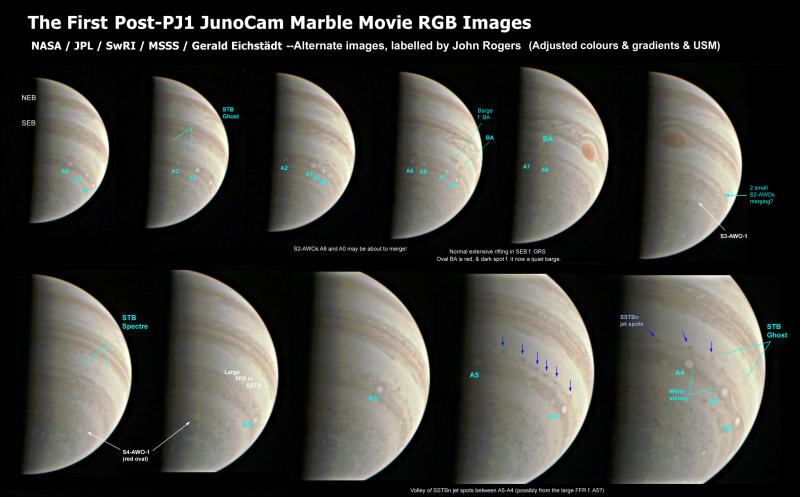 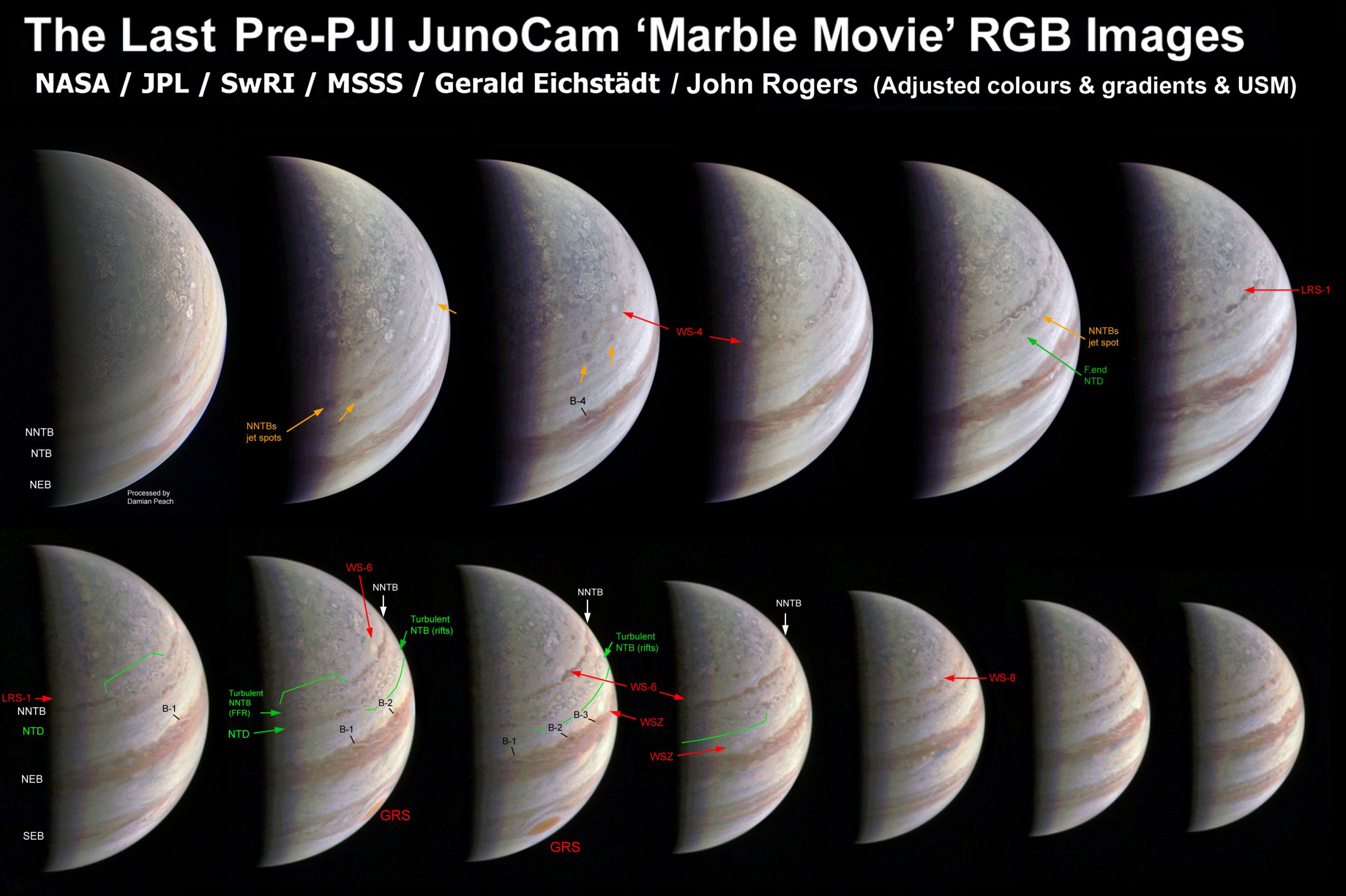 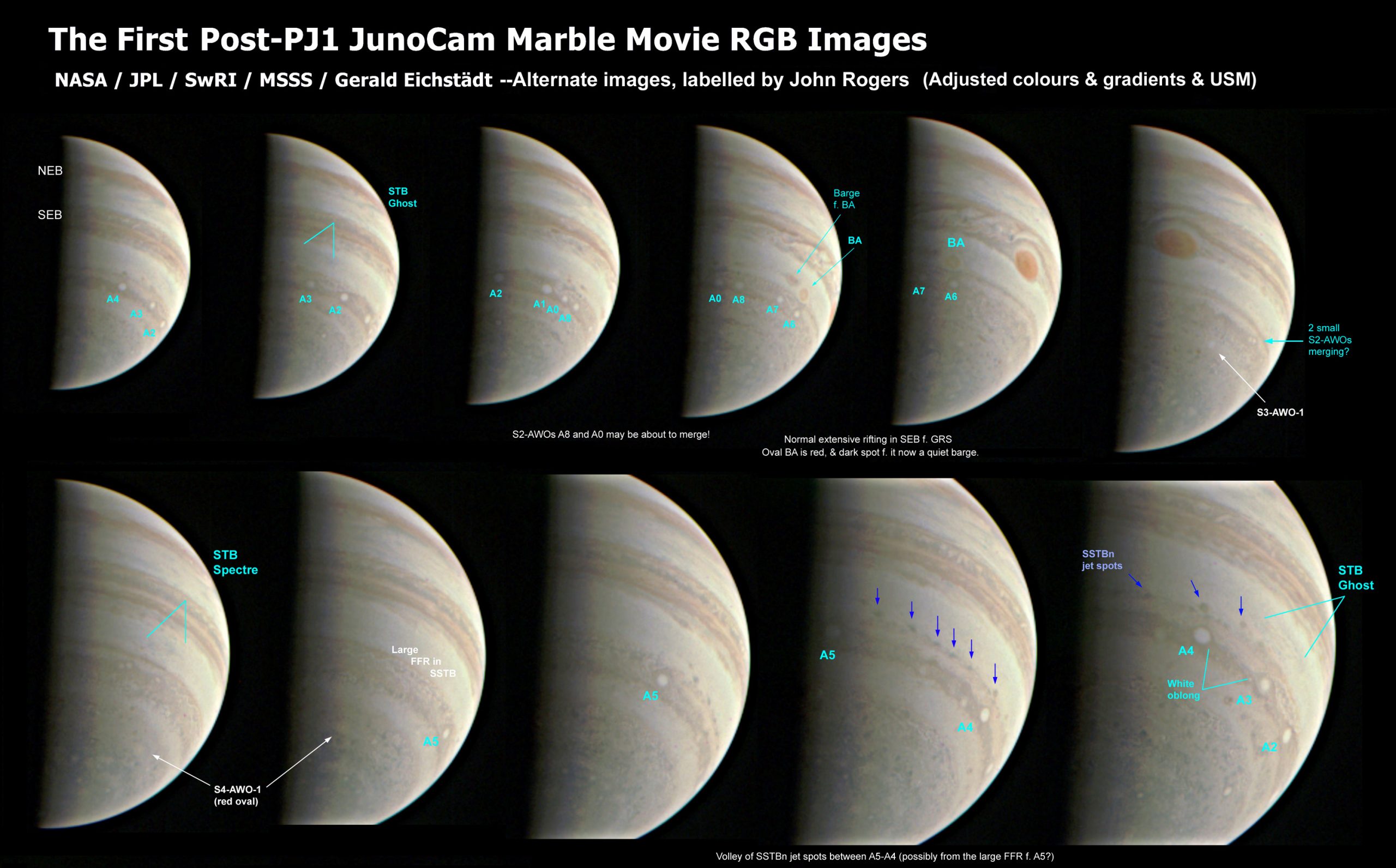