JunoCam at Perijove-1: Map of the planet

This map of Jupiter on August 27 was produced from the JunoCam images just before and after perijove-1, mainly by Gerald Eichstädt.  The northern hemisphere is from inbound images from 01:15 to 10:45 (UTC at the spacecraft), and the southern hemisphere is from outbound images from Aug.27, 19:15 to Aug.28, 04:45.  The map has been generated by collaboration of many amateurs using the data from NASA’s Juno team.  Gerald Eichstädt processed and projected the JunoCam images and converted them into maps. Because images of this oblate planet taken from such high latitudes and phase angles had never before been used to make a map, it was difficult to achieve accurate coordinates, so I checked the longitude scale of the map by reference to amateur data: charts from the JUPOS team up to August, and a map made by Marco Vedovato from infrared images taken by Phil Miles on Aug.26-28.  The latter images (and those by Anthony Wesley) were especially important for accurate alignment.  Gerald and I then re-compiled the map and adjusted the colours and intensities to enhance visibility of features.  The scale is in L3; for L2, subtract 60 degrees. Positions are thought to be accurate to ±3 degrees. 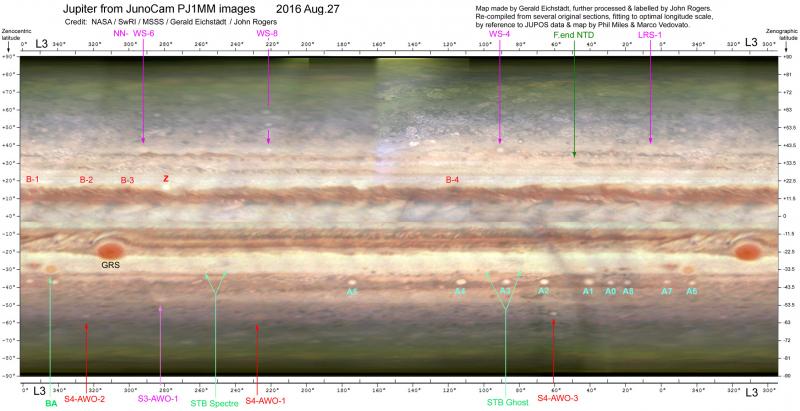