In addition to the public release images of the north and south polar regions [see previous post], which were fully processed and enhanced, the JunoCam team have released most of their close-up raw images (sets of alternating red, green & blue strips, scanned as the spacecraft flies rapidly from north to south) plus ‘Level 1’ products – i.e. consecutive strips have been map-projected and combined so as to produce a single colour image. No adjustments were made to colour or brightness.

JunoCam is operating in difficult lighting conditions because the plan for the (non-imaging) mission required that the spacecraft flies directly above the terminator.  This means that lighting is dim, with a strong gradient of illumination from day to night side, and contrast may be much reduced by high-level haze.  (Imagine flying over a terrestrial landscape close to sunset; with a light haze above, it can be difficult to see anything of the darkened terrain below.)  Moreover, perijove-1 was intended for testing the equipment, including exposure times, and data compression for transmission; so some of the images are deliberately of suboptimal quality.

However, further processing revealed spectacular detail in the polar regions, and amateurs are invited to try their hands at processing all the images; some improved versions of the polar images have already been posted on the junoCam web site.

Here I have processed some of JunoCam’s original images in Adobe Photoshop, adjusting gradients, contrast, and unsharp masking to enhance detail over most of the image.  This was not done systematically nor optimally – no doubt others can do a better job.  But the products show enough detail that we can recognise some interesting features, whether previously known or not.  The versions shown here are at half size.  These figures are also being posted on the JunoCam web pages (‘Image processing’).

This pair shows some of the huge FFRs (folded filamentary regions) at high latitudes; two of them were numbered on the images of the north pole in the previous post. These images also show narrow cloud lanes at the terminator (arrowed) – at various latitudes and orientations.  These are probably the features which the Juno team referred to in their first press release as clouds casting shadows – something which has never before been recorded on Jupiter.  The accompanying methane-band image (not shown here) is very dim, but at least one of these cloud lanes may be methane-bright; so it is possible that they are features of the high-altitude North Polar Hood.

This pair overlaps with the images of the south pole in the previous post, and shows some of the huge FFRs (folded filamentary regions) at high latitudes.  I have marked the positions of some of the known jets, and long-lived white oval A4 in the S2 domain.  The accompanying ground-based image, taken by Phil Miles in Australia, shows the same features 18 hours later.

These two images captured either the following (west) end of the STB Ghost or, more likely, the region immediately following it. The whole region seems to be exceptionally turbulent.  The Ghost is a cyclonic circulation, and on its south side, spots arriving on the prograde S2 (SSTBn) jet recirculate to return in the opposite direction. One such spot can be seen here, and it appears to be a vortex. (These two images are not of high quality, because their titles indicate that they were intended for ‘compression comparison’ – i.e. testing the effect of reducing file sizes for transmission.)

An even better context view is the first image in the post-perijove sequence (‘marble movie’), which Gerald Eichstaedt processed and posted.  A further-enhanced and labelled version of this is shown below.

Also attached is a set of ground-based images from April, when Jupiter was much more observable.  They show the STB Ghost and some of these SSTBn spots interacting with it, as well as a S2-AWO to its south; but note that all these spots have moved so they are not the same ones that are shown in the JunoCam images. (An extended version of this figure, tracking individual SSTBn spots recirculating at the Ghost, will be included in our final report on the 2016 apparition.) 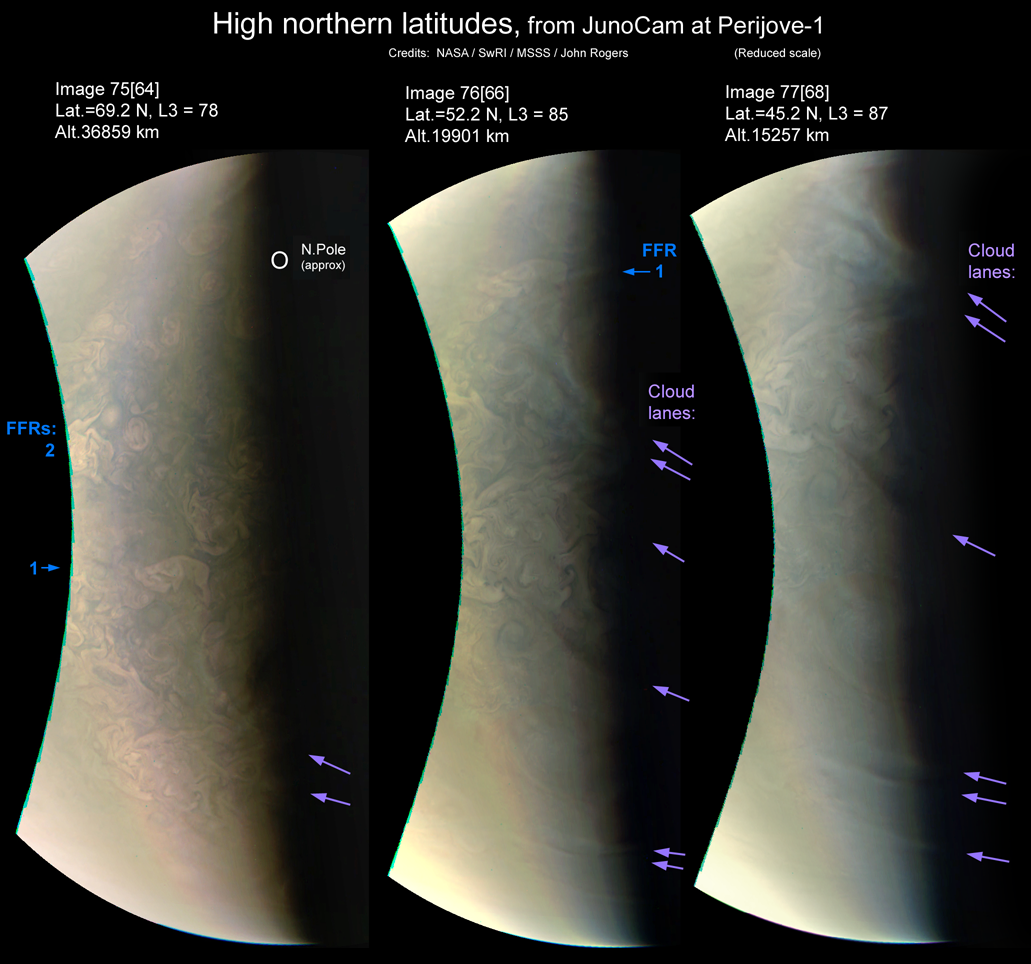 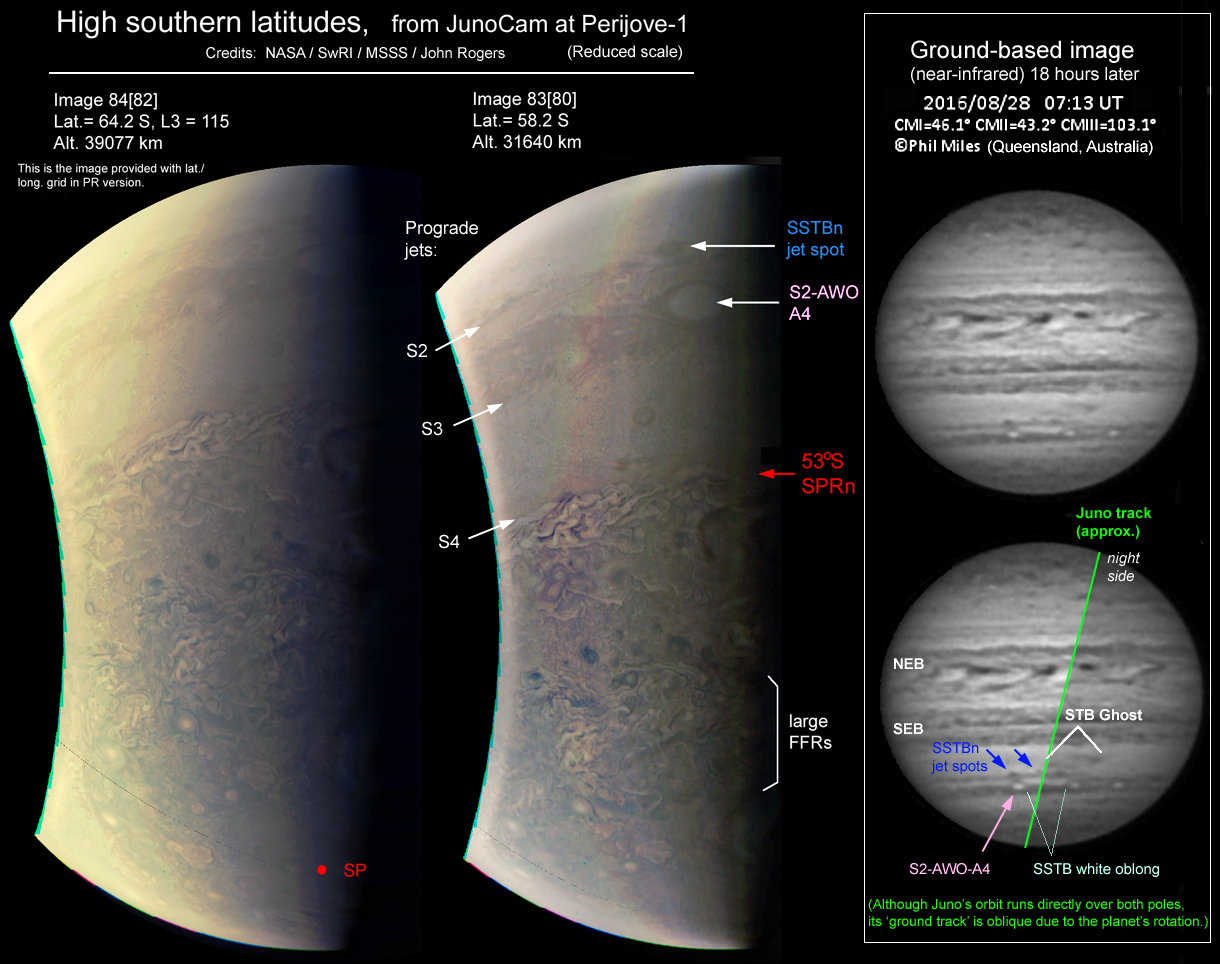 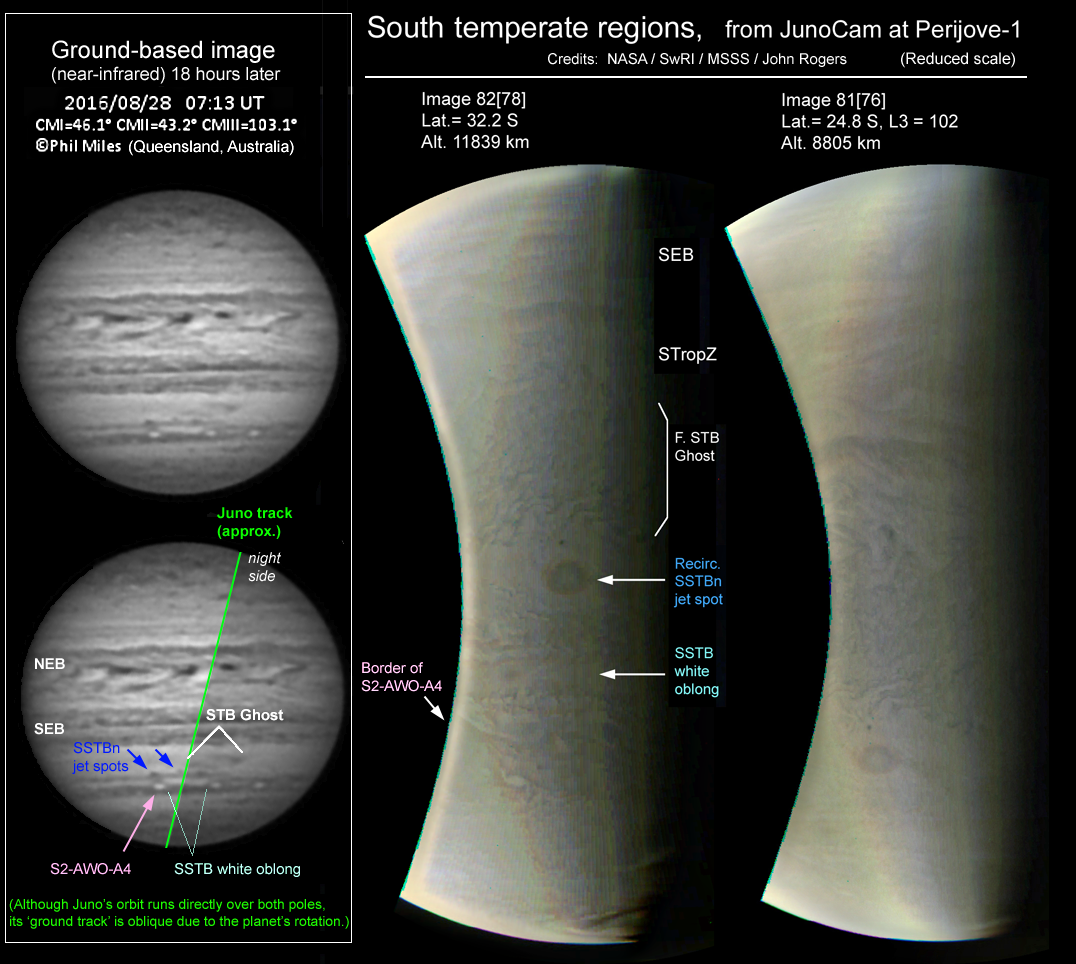 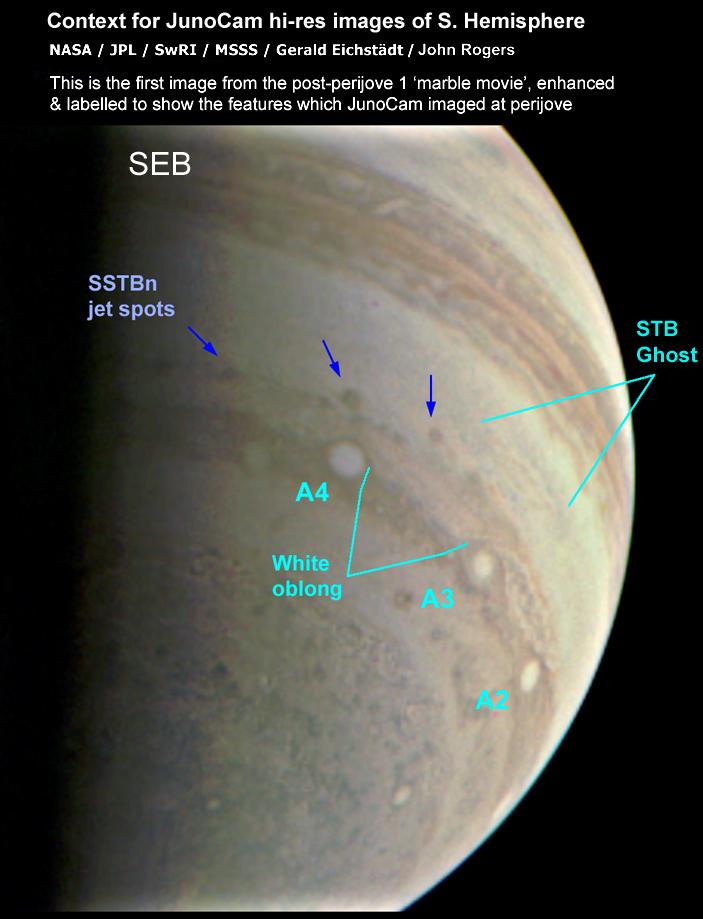 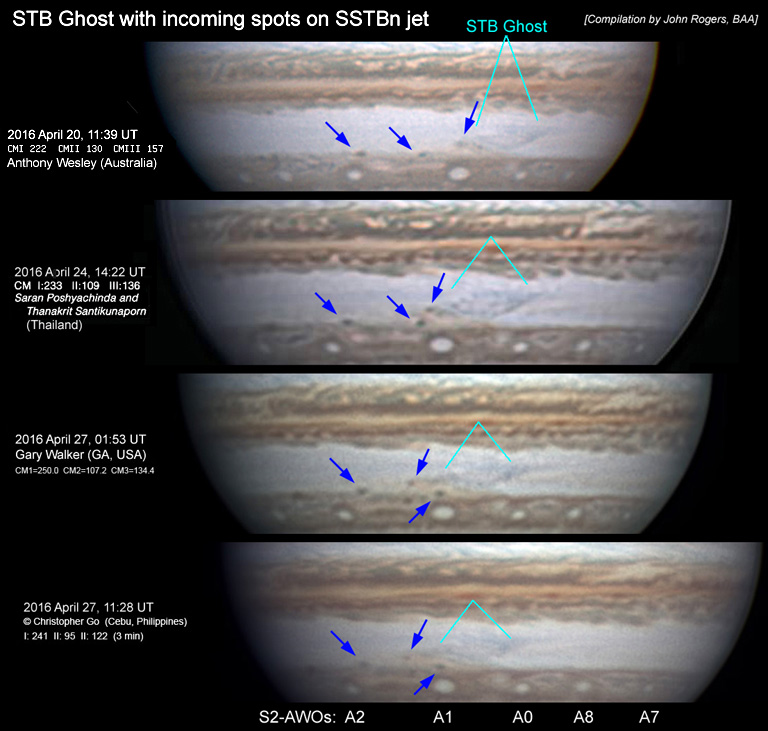