Perijove-19 (PJ19) was on 2019 April 6.  The spacecraft was turned so that the MWR could widely scan the atmosphere below, but JunoCam had to be switched off, to avoid looking into the Sun as the spacecraft spins.    It was only switched back on later, to cover southerly regions, as the spacecraft climbed towards the south pole.

The coverage was sufficient to map most of the southern hemisphere down to the GRS, where intricate patterns due to the ongoing ‘flaking’ events were seen; and the closest images showed Oval BA (still almost colourless) and the disturbed region of the S. Temperate domain preceding it, with three small cyclonic vortices.

The available data volume was used for exceptionally frequent and high-quality imaging of the south polar region.  Gerald Eichstädt produced his usual sets of polar projection maps, which were merged to make the composites shown in this report.  At recent perijoves he has been able to improve these still further, so animations of the maps now show wind motions more sensitively, e.g. one posted below.

The report (with  miniature figures) is posted here:   PJ19_Report-w-figures_JHR.pdf

The full-size figures are in a ZIP file here:   PJ19-report-figures.zip

Below is one version of the polar projection map, followed by an animation: 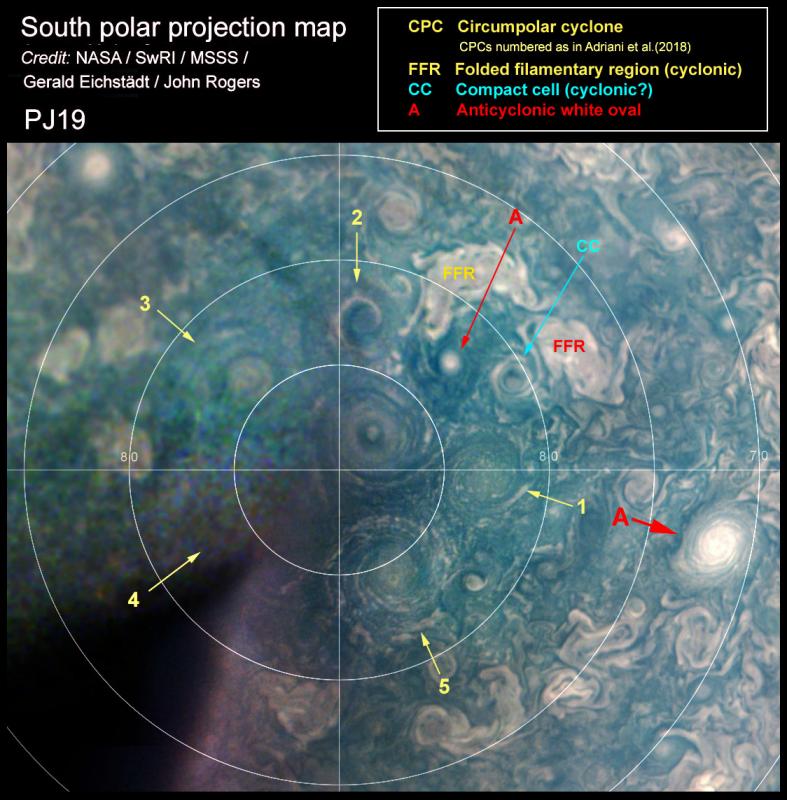