PJ28 was on July 25, and this is a thorough report on the images.  Highlights:

–North polar region:  Maps from the last four perijoves have been assembled to show the octagon of circumpolar cyclones and the central North Polar Cyclone (now becoming illuminated).

–Northern domains:  The usual spectacular patterns of turbulence are now seen with higher resolution, showing many many vortices, and regions with multi-level clouds.

–NEB:  Several major structures in the NEB are imaged, including a former AWO which is now dull grey, a mini-barge, and two bright white plumes freshly erupting within rifts.

–Concentric arcs SE of white plumes in the NNTB and NEB look like waves ahead of the expanding storms.

–There are many mesoscale waves across the EZ, and also on the NEBs and SEBs edges where they have not been seen before.

–Close-up images of the f. end of the STB Spectre (F-Spectre for short) confirm that it is still a site of cyclonic recirculation, with an anticyclonic ring adjacent,; it appears to be  a stable structure.

–South polar region:  The pentagon of cyclones is still present, with little change over the past four years; but its centre has performed small cyclic movements with a period of 11-12 months and an overall slow drift. The central cyclone, which is offset from the pole, is now at a higher longitude than before, and the gap in the pentagon has shifted accordingly.

Below is a composite view of the north polar octagon (Figure 2) and an animation of the south polar region: 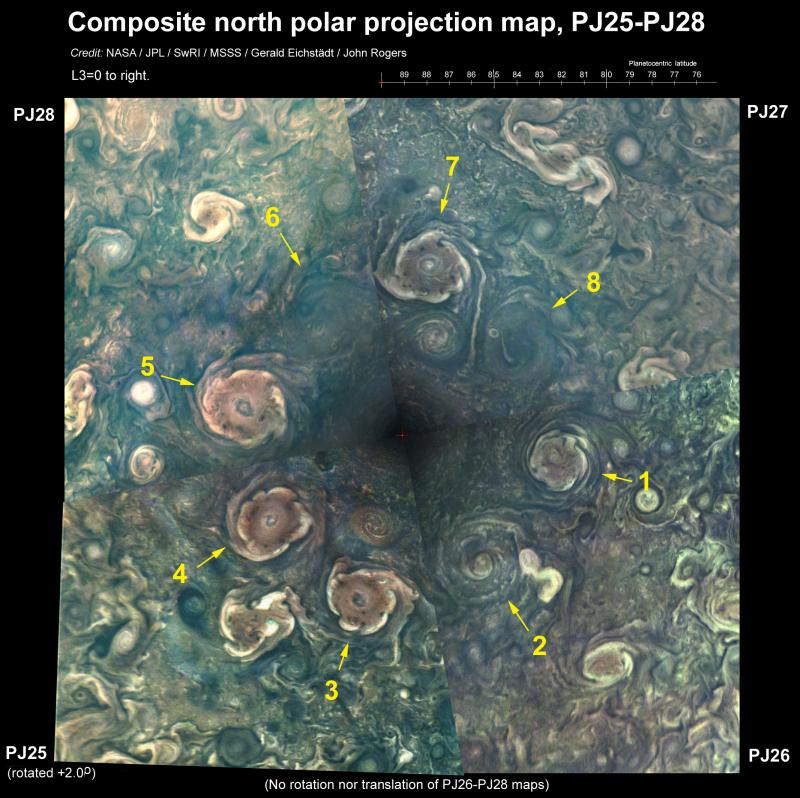