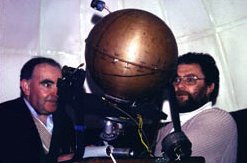 Harry Ford was a Scottish amateur astronomer who was renowned as a telescope and scientific instrument maker. He was one of the founders of the Dundee Astronomical Society (1956) and eventually became Curator of the Mills Observatory in Dundee.

Harry Ford observed most things astronomical including meteors, comets, aurorae, NLC and solar activity but it was with the 10-inch Cooke Refractor at the Mills Observatory that Harry excelled in lunar work. Following his appointment as BAA Lunar Section Director in 1976 Harry, alongside Morgan Findley, Dave Taylor and Tom Flood conducted research and studies into transient lunar phenomena, occultation timings and crater profile studies. Harry Ford eventually left the Mills Observatory to establish his own planetarium in Southend-on-Sea, Essex, and would later become the Planetarium lecturer at the Old Royal Observatory, Greenwich. Harry Ford was awarded an honorary Doctorate of Science by  Abertay University in 2000 and an MBE  in 2003 for his work in promoting astronomy.