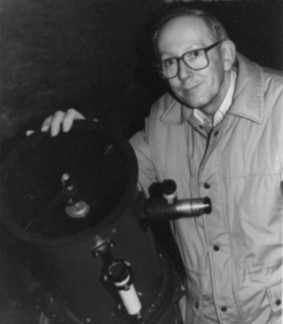 Jeremy Cook was born in South London on 16 August 1933. His interest in astronomy arose in the 1970s when his son Anthony, the current Assistant Director of the BAA Lunar Section, developed an interest in this subject. By trade Jeremy was an Electrical Engineer having attained a BSc in 1955 and he would eventually go on to work for the Ministry of Defence and achieve the notional rank of Squadron Leader. Jeremy’s accession as director in 1992 brought back stability to the Lunar Section.

Jeremy Cook observed many astronomical events in his lifetime, many with his family who all took up the hobby together, including the comets Hyakutake, IRAS-Iraki-Alcock, Halley and the impact of Shoemaker-Levy 9 on Jupiter in 1994. Cook also observed the now-famous TLP affecting Torricelli B in 1983. Jeremy and his son Anthony are also credited with observing and imaging the 3 July 1989 Titan occultation of 28 Sagittarii using a CCD video camera. This was quite an achievement at the time as CCD imaging was in its infancy and this was only the second time this occultation had been captured. Another major credit to Cook was his use of a PC to edit the LSC. Jeremy Cook edited the 2nd edition of the Hatfield Lunar Atlas and was working on another lunar atlas, an SCT version of the aforementioned atlas, but sadly passed away on 21 December 2003.