As you can imagine, over the past few centuries there have, from time to time, been observations of the Moon which are hard to explain. Sometimes these are what as referred to as Transient Lunar Phenomena (TLP), where an observer has seen a glow, a colour, a lack of detail, flashes, or short term greyness inside shadowed areas. Other puzzles are simply trying to understand why an astronomer drew something in a particular way, perhaps drawing a crater where there wasn’t one, or vice versa.

TLP activity is hard to explain in terms of our understanding of lunar surface processes. This leads many critics to suggest that TLP are simply a result of terrestrial atmospheric (or telescope optical) effects, or even human misinterpretation of the appearance of the lunar surface – this is covered more in our check list for suspect TLP . However there are some aspects lunar science data and geology which could offer some hope in explaining TLP. Firstly, despite the notion that localised lunar volcanism died out 1 billion years ago, crater count ages of lunar features called “Irregular Mare Patches” (Also known as IMPs, or Meniscus Hollows), may suggest that geologically recent lunar volcanism could have occurred in only the last few tens of millions of years, and in theory could happen any time. However, IMPS are just a few km in size, and cover a fraction of < 1% of the lunar surface area, do not correlate with TLP sites, and no active volcanic lava flows or internal volcanic hotspots on the surface have ever been noted by spacecraft.

Another theory that has been suggested as an explanation of some TLP is the electrostatic levitation of surface dust particles into clouds above the surface. This effect really does occur as determined by computer simulations, laboratory experiments, and observational data from Apollo surface experiments. However, dust measurements by NASA’s Lunar Atmosphere Dust Environment Explorer mission (LADEE) , seem to suggest that although dust concentrations increase close to the surface, that they probably are not of sufficient concentrations to scatter, or absorb light by enough to cause visible effects suggested by some TLP reports. In the past, the spectral emission of gas has been put forward as another theory to explain coloured TLP, but again spacecraft, and ground-based packages on the lunar surface, imply that major out-gassing events would be needed, and these have simply not been detected by spacecraft instruments. Nevertheless, some out-gassing from radiogenic decay inside the Moon does occur, and orbiting spacecraft have detected increased emission over Aristarchus and near to mare edges (TLP seem to occur near both). Three other TLP theories, which are difficult to simulate, or test out in a laboratory-recreated lunar vacuum, are: arcing between charged dust particles in a rarefied gas, flashes of light produced by electro-dynamic effects when rocks split due to thermal stress, and ball-lightning from shallow moon-quakes. We do at least know that some flashes reported as TLP in the past can now be explained by meteorite impacts, but these make up a small proportion of TLP. 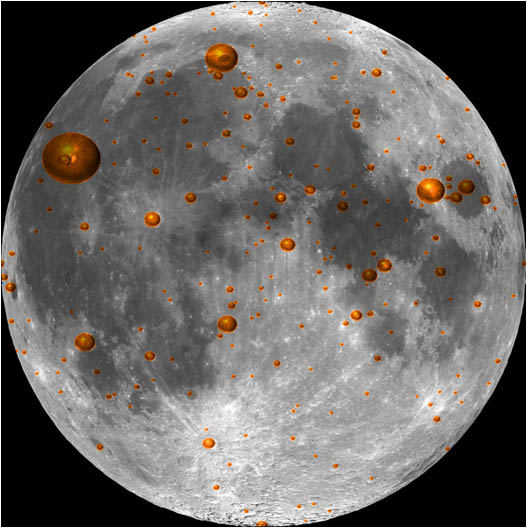 The position of TLP reports from 554 AD to 2008. The spot area indicates
frequency of reports for the feature concerned

Nevertheless, over three thousand reports of TLP exist, and it is important to understand just why people have seen these if they are non-lunar in origin; and if they are lunar in nature, then which of the above theories can best be supported by the evidence? Rather than placing an emphasis on an observational programme to detect new TLP, which based upon statistics may occur once every hundreds to thousands of hours apart, we encourage our observers to try to disprove those seen in the past.

Disproving past TLP accounts is very rewarding as you will get a feel for what may have tricked and misled, sometimes famous astronomers, into thinking they had seen an odd colour or glow against the lunar surface. Conversely, if we are unable to disprove a past TLP report, this highlights a valuable piece of observational evidence that needs explaining. We achieve this be getting observers to study the Moon to within ±0.5˚ (or finer) similar illumination to when a TLP was seen in the past, and sometimes we even constrain both the illumination and viewing (topocentric libration) angles to within ±1˚ (or finer), in order to investigate the possibility of some component of the surface having a degree of specular reflection.

Here is an example of where we have disproved a past TLP reports, using similar illumination imagery:

On 2001 Jul 26 at 00:17-00:45 UT Daniel del Valle Hernandez (ALPO) made an unusual sketch of Pitiscus crater (shown in the centre below) that showed 3 small patches of light coming out of the “just over half filled” interior shadow. Although the crater has a central peak, which could explain the central patch, what were the other two light spots caused by? We certainly had no reports of this effect being seen before.

Fortunately on 2017 Feb 02 at 01:49 UT Rik Hill (ALPO-BAA) took an image (Left) under very similar illumination, and upon contrast stretching (Right) this confirms the three light patches inside the shadow. The two patches away from the central peak turn out to be just highland areas on the floor poking through the interior crater shadow.

Here is an example of where we have failed to disprove a past TLP report using the repeat illumination method:

On the left is a Lunar Aeronautical Chart (LAC) of the Aristarchus region, with locations marked by Lowell Observatory astronomers Greenacre and Barr, of some transient red glows that they both saw on 1963 Oct 30 between 01:50-02:15 UT, using the 24” Clark Refractor. On the right is a repeat illumination image by Bev Ewen-Smith (COAA) taken on 2011 Apr 15 at 21:13-21:17 UT, that although in colour, does not exhibit any redness at the locations shown on the right. We have attempted to simulate atmospheric and chromatic aberration colour on a computer, but we cannot produce red on the specific indicated areas. This enhances the credibility of the Flagstaff observers report. For further details see the following web site: http://the1963aristarchusevent.com

You can participate in this observational programme simply by going to this website: http//users.aber.ac.uk/atc/lunar_schedule.htm . The website will tell you what to observe and when. Just find the nearest geographical location to where you observe from. This will avoid observing when the Moon is too low or when the Sun is above the horizon. The web site will also tell you what minimum size instrument to use, and whether visual observations or monochrome/colour imaging are needed. Please send your observations in and we will make sure that these are published and analysed in the BAA Lunar Section Circular each month.