Mars will be at opposition again on 2018 July 27, when its declination will be more than 25o south, the disk diameter will be 24.2 arcseconds, and the areocentric longitude Ls will equal 219o. On Mars, the last quantity corresponds to early spring in the S. hemisphere (spring having commenced at Ls = 180o), and the beginning of the season in which large dust storms can develop. Though it is a perihelic opposition (one which occurs within 90o of perihelion, Ls = 250o), UK observers will find Mars a challenging object to observe on account of the very low altitude. Consulting the BAA Handbook shows that the declination will be less unfavourable in the months prior to opposition. We shall want good coverage of the planet from early May onwards, at the very latest.

For comparison with recent perihelic oppositions, and to get a flavour of what can be observed, the writer refers readers to his final report on 2003, an opposition that was very similar in terms of presentation, and which can be found at our Section website at www.britastro/mars. A variety of maps will also be found at that website. Apart from any meteorological phenomena on display, the changing size of the S. polar cap will be of constant interest, and there will be good views of the N. polar hood as well. In the years since the last encircling storm of 2007, there has been very little change in the albedo markings, but classically variable areas such as Solis Lacus, Pandorae Fretum, Nodus Alcyonius, Aetheria and Cerberus should always be watched.

Key seasonal dates will be as follows:

The disk will be 6 arcseconds or more in diameter for the long period from 2018 mid-February until early 2019 February. Actually, the apparition actually began as long ago as last September, when some members began imaging. Their observational work will be discussed in an Interim report later.

The following past oppositions give the closest seasonal matches with 2018 (where Ls is quoted for opposition):

The best match is 1939. From the above list of oppositions, those of 1924 and 1971 involved planet-encircling dust storms. No more than local or regional events occurred in the other oppositions. On average great events take place once in every third martian year.

Finally we give a few illustrations of similar perihelic oppositions (Figure 1). 1954 was one of the first oppositions for which the Mars Section received photographs; the 1986 photos [1] were able to take advantage of the then new ‘miracle film’, Kodak TP 2415, while the observers of 2003 were able to take advantage of the CCD camera and the ‘webcam revolution’. Figure 1H shows the S. hemisphere of the planet hidden under an encircling dust storm. Figures 1C, D, G, K and L show rifts and other details in the S. polar cap. Figures 1I and J show the bluish N. polar hood particularly well. Long term changes in Solis Lacus are apparent when comparing Figures 1A,C, F, I and L; likewise for Mare Sirenum by means of Figures 1G and L, etc.

1  More images from the writer’s stay at Pic du Midi in 1986 are now uploaded to:

[….and at my member’s page on the BAA website] 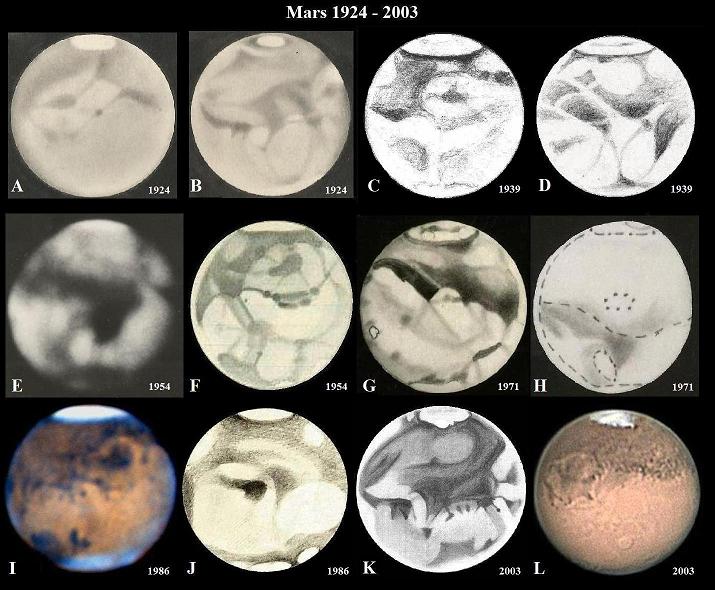 Drawings, photographs (E, I) and one image (L) of the perihelic oppositions of 1924-2003; all illustrations from the BAA Mars Section Archives.