There are several “levels” of imaging work possible on Mercury and Venus depending on the equipment available, expertise, and inclinations of the imager.

At the easiest and least scientific level, there is the possibility of capturing these planets unresolved in a wide sky or landscape view, particularly when they make interesting and attractive conjunctions with each other and with other bodies such as the Moon, Mars, Jupiter, Saturn, or bright stars. Such views are rendered the more scenic by being necessarily captured in twilight. Modern consumer-type digital cameras can make a very good job of such scenes, particularly digital Single Lens Reflex Cameras (dSLRs). A telescope is not necessarily needed, good results being obtainable with standard and telephoto lenses. As exposures are quite short, a driven mount is not required, but a good tripod is (though even that is becoming less necessary now with image-stabilised lenses becoming more common). 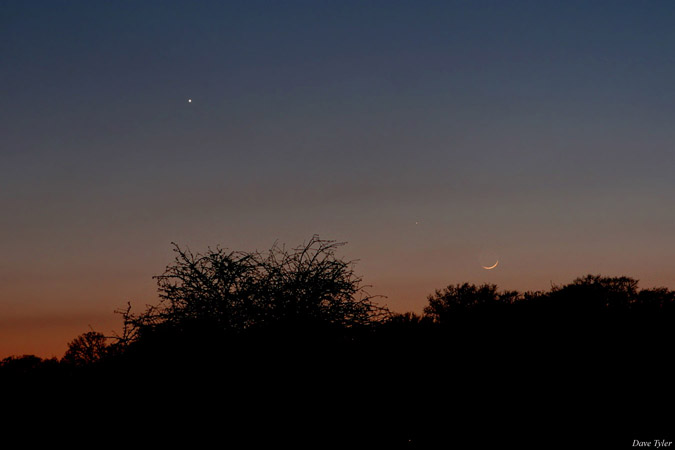 The next level up of imaging sophistication is the use of high-frame rate cameras, either commercial webcams, or their astronomical developments such as the Lumenera or Imaging Source series of cameras, in conjunction with telescopes, to obtain either direct colour images, or monochrome images through standard red, green and blue filters, which may, if desired, be combined into true colour images. These cameras produce video sequences which are recorded to the hard disk of a computer and subsequently processed using software such as Registax or AVIStack to produce a single, average, optimised image free from seeing distortions. Such images will show the phase of the planet. Unfortunately, in the visual waveband, the Venusian atmosphere is generally rather featureless. In the case of Mercury, the planet’s small angular size, and relative lack of large-scale albedo features (as we know from probe imagery) compared with the other rocky bodies of the inner solar system (Mars and the Moon) combine to render it extremely difficult to produce images with amateur equipment that will clearly show surface features.

Serious imaging work on Venus is performed with monochrome high frame-rate cameras and specialised filters. The features of the upper atmosphere are most distinct beyond the visual waveband, at both the high-frequency, ultra-violet, end, and the low-frequency, infra-red end. UV and IR images tend to show different features as they probe different levels of the Venusian atmosphere. Some cloud contrasts can often be picked up with blue or violet filters as well, and these tend to be similar to the UV markings, but at lower contrast. However, ordinary visual colour filters cannot be used with cameras, as they “leak” IR light, giving a confused result. For imaging at the violet or UV end of the spectrum, IR blocking is essential, either (preferably) built-in to the filter, or using an additional IR blocking filter.

The most commonly-used and effective filters for showing Venusian cloud details are the Astronomik IR Pro filters (742nm and 807nm) and the Astrodon-Schuler and Baader UV “Venus” filters.

The essential point of frustration in imaging (or indeed drawing) Venus is that when the phase is large, the planet is on the far side of the Sun, and the disk is tiny, and when the planet is near to the Earth and subtends a large angular diameter, the phase becomes a very thin crescent. The best results tend to be obtained inbetween, typically when the planet is a wide crescent, so quite large, but still having a reasonable area illuminated.

Both Venus and Mercury are normally imaged telescopically in full daylight, when they are high. During twilight or at sunrise or sunset they are always shining through too great a thickness of atmosphere to produce sharp images. An exception to this might be the imaging of the thin Venusian crescent in a dark sky in order to try to confirm or deny the existence of the Ashen Light. (The Ashen Light has never been clearly photographed or digitally-imaged.) The need to find Mercury and Venus in daylight means that an accurately-aligned equatorial mounting is essential, either equipped with accurate setting-circles, or a reliable GOTO system. It is essential never to randomly sweep-around the sky with a telescope looking for Mercury or Venus when the Sun is above the horizon. It is all too easy for the Sun to enter the field accidentally resulting in instant and permanent blindness. If the telescope is to be swept, it must be away from the Sun.

In a separate category is the imaging of Venus further into the IR than previously described, at a wavelength of around 1000nm, a technique that has recently been developed by some amateurs to detect thermal emissions passing through the cloud layers from the night-side surface. Such images are taken when Venus is a thin crescent in a fairly dark sky. The illuminated crescent is greatly over-exposed in the process of revealing the faint night-side emission. 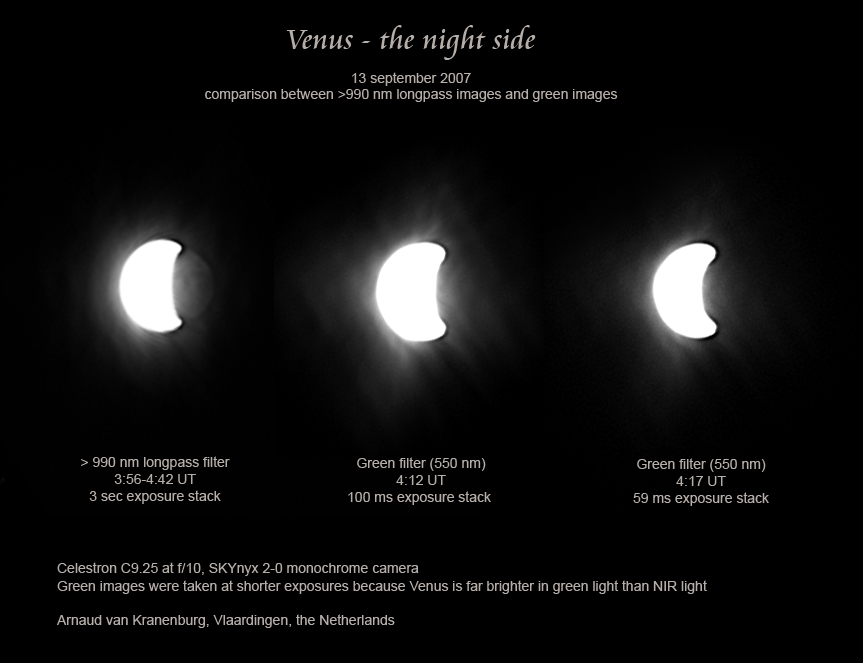 UV imaging is of no benefit in the case of Mercury, and colour images of Mercury are rarely produced. Rather, the best chances of imaging detail on Mercury are with the use of monochrome high frame-rate cameras and red or IR filters, which operate at the wavelengths least affected by seeing distortions, and hence give the sharpest images.

Further advice on the imaging of Mercury and Venus is available from the section.

Return to the Mercury and Venus Section home page