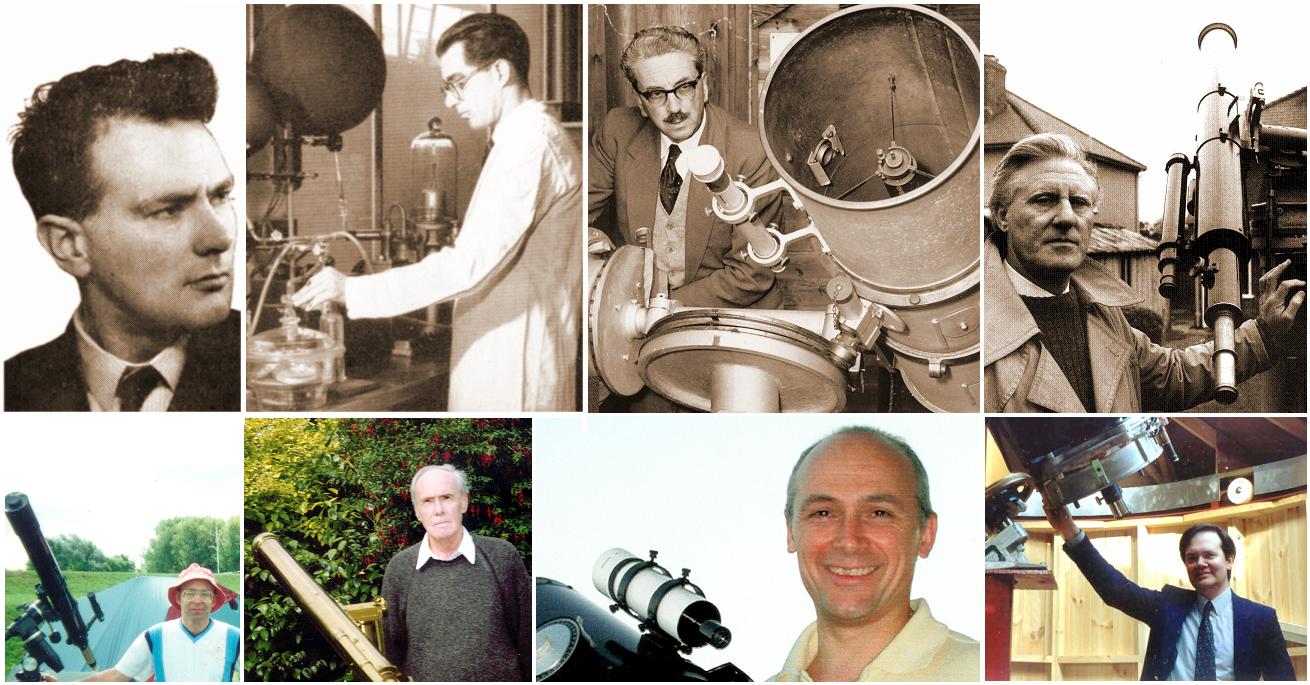 The BAA was founded in London in the autumn of 1890. The Association formed observing sections for certain objects or tasks, and in January 1895 a 30 year old Scottish amateur, Henry McEwen of Glasgow, was invited to be Director of the newly formed Mercury and Venus Section. He was to be Director for the next sixty years, a term of office unequalled in the annals of the Association. A  paper on McEwen by Richard McKim has been published in two parts in JBAA 115, 1, 2005 and 115, 2, 2005. It is available here as two PDFs:

Henry McEwen was an engineer by profession and he was modestly equipped as an observer (he used only a 12.7cm refractor), but he possessed the qualities of patience and persistence that are the marks of the dedicated amateur. His years as Director produced no significant advances in our knowledge of Mercury and Venus, nor were any advances made in the traditional techniques of visual observation. The reason is that the few advances that were made, were won at the very forefront of professional technology – and even these results were few and uncertain.

McEwen remained Director until just a few months before his death in 1955; and his surviving notes and correspondence show him to have been alert and enthusiastic at an advanced age. The Section suffered a further and irreparable loss immediately after the death of McEwen. Virtually all of the sixty year archive of the Section’s work was inadvertently destroyed, because it seems that McEwen had left his executors no instructions about it.

Patrick Moore, the popular writer and TV broadcaster on astronomy, was appointed Director in 1955. Moore revitalised the Section. He turned attention to the phase anomaly of Venus and to the Ashen Light. Observing techniques started to branch out into photography and visual colour filter observations were made by VA Firsoff, AW Heath, J Hedley Robinson and FC Wykes.

In 1963 Moore was succeeded by a professional astronomer, Dr FL Jackson, whose brief time in office ended the year after. Before the sixties, Venus was world of mystery. But now, spectroscopic and microwave results were pointing at a hostile environment there. The Mariner 2 spacecraft passed the planet in 1962 and it sent back information which indicated that the temperature at the surface of Venus was lethally high.

The next Director, J Hedley Robinson was a lay preacher whose daily work was in a bank. Robinson already had ten years experience of visual colour filter work. One of his technical advances was to adopt the Wratten 15 yellow filter for the purpose of making phase estimates of Venus and for general disc examination. Robinson also improved the approach to ashen light observations, by recommending the use of an occulting bar and the Wratten 47 purple filter for greater reliability and consistency. Refinement in techniques resulted in evidence that tended to confirm the 4 day super rotation of the Venus atmosphere. This was against the background of ”the great filter battle”, as Patrick Moore put it. The great filter battle was a controversy within the BAA, often focussed on the effectiveness of colour filters in relation to Venus work. Cdr. Henry Hatfield succeeded in photographing the kind of phase differences that the visual filter users recorded for Venus. Ultra-violet light photography by Rackham and, latterly, by Hiscott succeeded in showing cusp caps and shaded areas of the Venus disc.

Mercury was neglected by many amateurs, but there were exceptions. In the mid-sixties Glasby’s measurements indicated that there was no difference between the observed phase and the theoretical phase with Mercury, as there was for Venus, but the question was far from settled. Hedley Robinson believed that evidence for a thin Mercurian atmosphere might be provided if temporary obscurations of the surface could be observed, but Mariner 10 later showed that the planet’s atmosphere is incapable of holding particles in suspension. At the 1973 November 10 transit of Mercury Harold Hill observed the planet silhouetted in diffused H-alpha light when it was off the hard edge of solar disc.

During the seventies the Russian Venera spacecraft confirmed that Venus was a world of roasted rock and Mariner 10 showed Mercury to be cratered and airless. There was an impression during the late seventies that interest was waning in the inner planets. The Council of the BAA appointed a Forward Look Committee and one of their recommendations was the amalgamation of the Mercury and Venus Section with the Mars Section. The recommendation was adopted.

Upon his retirement in 1979, Hedley Robinson nominated Richard M Baum as Director of the new three planet Section. This was called the Terrestrial Planets Section (TPS). Baum faced having to regenerate interest and in order to succeed he delegated tasks to talented and motivated observers who were nominated as co-ordinators for each planet. Three section meetings at various venues fuelled new interest.

In 1982 a Minor Planets group was started in the TPS. By 1991 Baum had achieved his object. This was no less than the re-creation of the old natural Sections – a Mercury and Venus Section and a Mars Section. In addition a new Section had been created out of the TPS. This was the Asteroids and Remote Planets Section (1984). Three of Baum’s co-ordinators became Section Directors themselves: Richard McKim, Mars, and later Mercury and Venus also; Andy Hollis, Asteroids and Remote Planets; and David Graham, Saturn. In 1991 the TPS was disbanded. The Mercury and Venus Section returned, ninety-six years after its first formation.

Richard Baum retired as director in 2000 and was succeeded by Robert Steele. After brief periods of directorship or acting directorship in the early 2000s by Edward Ellis and Mario Frassati, the section was taken over by Richard McKim, who also remained Director of the Mars Section. He has steered the section into the modern CCD era, while continuing to very much encourage visual observations to continue the consistent record. Amongst the projects he has undertaken with section observations have been to re-determine the 4-day rotation period of the upper Venusian atmosphere to higher accuracy and to re-analyse the phase anomaly of Venus.

In 2004 the long-awaited transit of Venus was widely observed. The section received a huge number of reports, which were collated into a report in the Journal. It had to be acknowledged that historical reports of the “black drop” effect appeared to be wide of the mark; when observed high in the sky, under good conditions, with modern instrumentation, such a phenomenon was almost undetectable.

In the first decade of the 21st century, the use of fast frame rate CCDs (or webcams) in conjunction with specialised filters, particularly UV transmitting filters, has become a powerful means for amateurs to monitor the appearance of the upper Venusian atmosphere. Such images have actually been called for by planetary scientists working with the Venus Express probe to give a global overview of the meteorological phenomena of Venus that are seen in far more detail by the probe. Hence amateur work on Venus today continues to have a use despite the wealth of information provided by the probes. On the other hand, with the complete mapping of Mercury by the Mercury Messenger probe, the scope for serious amateur work on that planet is probably at an end.

In the last few years a new area has opened up in the CCD imaging of the night side of Venus, first demonstrated by Pellier in 2004. This imaging, in the infrared in the region of 1 micron, far beyond the limit of the human eye, allows surface feature to be imaged by their thermal emission (but the images are also modified by atmospheric absorbtion effects). 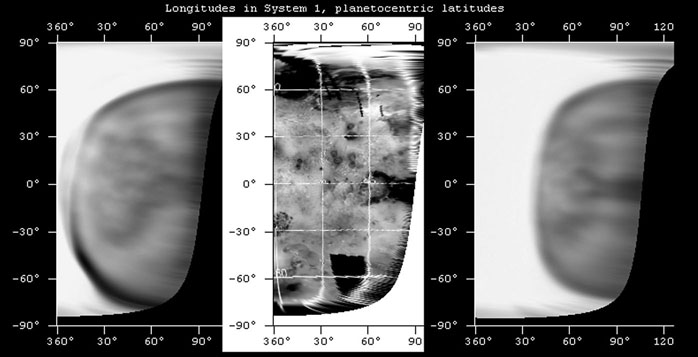 Images of the Venus night-side taken at 1000nm by Berndt Gährken and subjected to cylindrical projection (left and right), compared with Venus Express thermal mapping of the surface. The two-pointed fork-shaped feature at 0 º lat., 60º long. clearly corresponds, but other features in the left-hand image must be due to clouds.

What use may be found for this technique remains unknown. Furthermore, the nature or indeed existence of the Ashen Light remains disputable, having never been recorded except visually. The amateur study of Venus remains a live and active area, and the BAA Mercury and Venus Section one of the principal organisations devoted to organising, encouraging and analysing this work.

Return to the Mercury and Venus Section home page