Although we are now (February 2019) at solar minimum in terms of the number of sunspots, there is one photospheric feature that is at maximum – polar faculae. A professional paper from 2013 on 100 years of polar faculae measurements [1] gives in its introduction the following:

Solar faculae are bright features on the surface of the Sun associated with accumulations of magnetic flux inside inter-granular lanes. They are believed to be the consequence of a depression in the optical surface of the Sun caused by the magnetic field, which allows the observer to see the warmer (and hence brighter) walls of the granular upflows and makes them easier to spot near the solar limb. As a result of this physical relationship, it is not surprising that faculae can be used to track magnetic flux and follow the evolution of surface magnetic fields. In fact the numbers of polar faculae… have been found to be modulated by the solar cycle. In addition, there is a strong correlation between the polar faculae and the… magnetic field… . This correlation and the ability to see them clearly at the poles, make faculae as valuable for studying… aspects of the solar cycle as sunspots… .

The MDF plot above also shows an annual variation for each hemisphere, with the southern hemisphere having a higher MDF in the early part of the year and the northern in the latter part.  Given that polar faculae occur above/below latitude of ~70° and the changing orientation of the Sun as viewed from Earth throughout the year, there are times when more of one pole can be seen than the other.  The best time for the southern pole to be observed is between 20th February and 21st March 2019, as shown below (orientation for a projected solar disk), and the northern pole is best observed between 24th August and 24th September 2019. 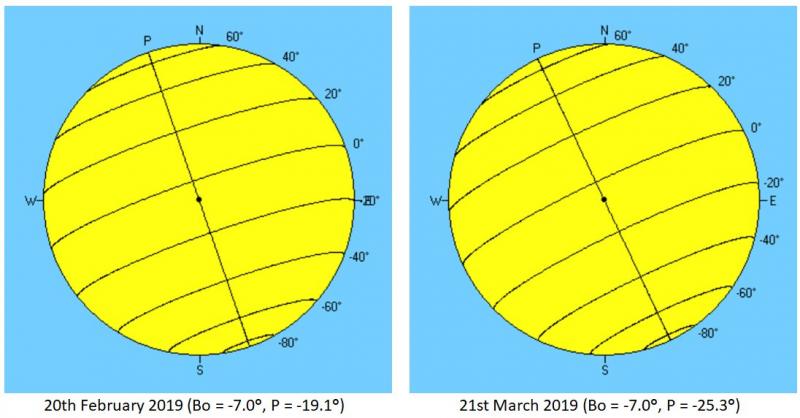 The Solar Dynamics Observatory (SDO) Helioseismic and Magnetic Imager (HMI) Continuum image below from 3rd February 2019 shows in polar faculae near the southern pole – they are quite small compared to those associated with sunspot groups when near the limb.  This makes them more difficult to observe but they can be seen with amateur solar equipment.

Suggestions to observe polar faculae are:

So observations of polar faculae, especially between 20th February and 21st March 2019, are encouraged along with any suggestions on how best to observe them. These will be included in future Solar Section Newsletters.